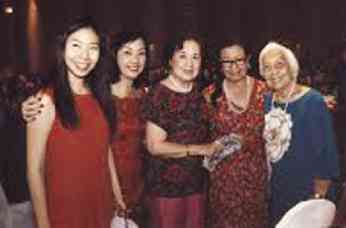 Martina “Beling” Go Ching Hai, prominent civic leader, turned 87 and there was a grand celebration at the ballroom of the Radisson Blu Hotel. Hosting were her children, their spouses and grandchildren:

The Radisson chefs prepared an elaborate dinner that earned raves from the numerous guests and well-wishers. The evening was livened by a trivia quiz on the life of the celebrator, who personally awarded the lucky guessers.

The evening’s program was highlighted by performances from the Cebu City Dancesport Team which Beling supports. They have consistently won prizes here and abroad.

Children, grandchildren and greatgrandchildren of Don Esteban Go Sing King gathered at the spacious ballroom of J Center for the 100th birthday observance of the family patriarch. Lots of close relations and friends attended, led by Mandaue City Mayor Jonas Cortes and his wife Sara.

Welcoming all to their father’s milestone were Thelma Go, Conching and Teodoro Yap, Marcelina and Henry Yap, Angeles Go, Linda and Tommy Po, Anita and Sonny Lu and our dear friend Amado Go who was thick into the event’s preparations.

There were entertainment numbers from the young people and valuable prizes were raffled off to lucky guests. At one point the entire family was on stage with Don Esteban for the presentation of the birthday cake. “We are a total of 62,” said Amado Go.

An exhibit of family pictures and memorabilla ushered in the Escaño family reunion at the 856 G Gallery in A.S. Fortuna, Mandaue City. The occasion also served to officially launch the book, “Escaño—A Family Portrait.”

The book’s text has been brilliantly written by Resil Mojares, Cebu’s most eminent writer and historian. The thick volume is richly illustrated with precious photographs lent by desdendants of Don Fernando Escaño and his wife Doña Agustina Faelnar.

They established a business dynasty in the second half of the 19th century from the family of Doña Agustina’s bailiwick in Malitbog, Southern Leyte. The book documents the family’s saga well into the 20th century and gives its perspectives for the years to come.

Don Fernando had children before his marriage, and of the many he had with Agustina, 10 survived to form their own extensive families. All are accounted for in this book with detailed genealogies.

Mojares wrote the first book on the Escaño family in the late 1980s to coincide with the first reunion. There was a follow-up some years back, and now this magnificently researched document which focuses on the grandchildren of Don Fernando.

“This is the final book on the Escaño family,” said Mojares, who was at the opening of the exhibit to sign the title page for those who obtained the book. “If there are future books, they should deal with the families of the grandchildren,” he added.

Cutting the ceremonial ribbon were Michel and Amparito Lhuillier, who have been most supportive in having the book published. Michel’s mother, Angelita Jones y Escaño, was a granddaughter of Don Fernando and Doña Agustina.

Also in the ribbon-cutting ceremony were Rosebud Sala whose late husband Jesus Sala was a grandchild of Don Fernando and Doña Agustina; and Terry Escaño Manguerra, overall chair of the 2015 reunion.

An area of the exhibit was dedicated to the late Consuelo “Pet” Escaño Misa who passed away two years are while in the midst of preparing the book, indicated her first cousin Chona Bernad y Escaño, whose daughter Pia Mercado is the manager of 856 G Gallery.

For three days after the book launch, over 300 descendants of the Escaño family, a good number of them from abroad, attended the various highlights of the reunion. There was a welcome reception at Casa Escaño, formerly the home of Jesus and Gloria Escaño.

It is now a bed-and-breakfast facility with a restaurant whose menu offers some of the treasured family recipes. Jimmy Escaño is a hands-on manager.

Next evening was the grand reunion event with dinner, program, and dancing all night at Oakridge. A dance band played until the wee hours of the next morning. Stars of the night were Mon-Mon Escaño and cousin Clint Escaño doing the bump.

Most of everyone were up and about early next day for the whole-day Sunday picnic in Danao City at Las Palmas, the beach house of Michel and Amparito Lhuillier. They were particularly lovey-dovey, as it was their 51st wedding anniversary.