RM de Leon: An artist who can’t be boxed in | Lifestyle.INQ ❮ ❯ 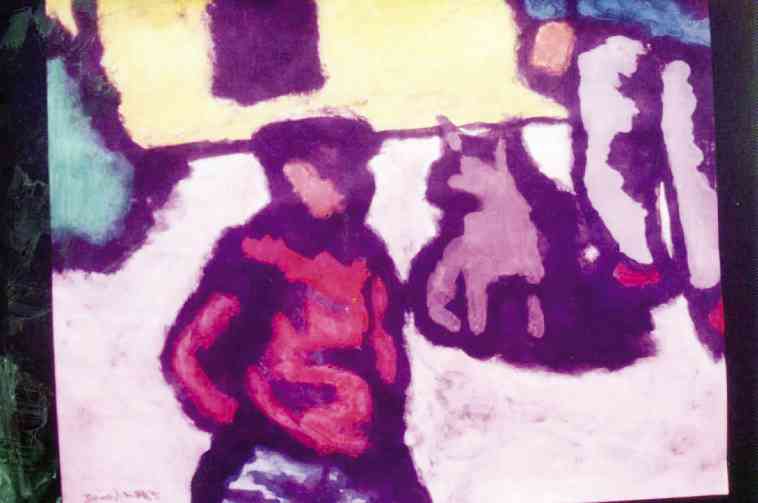 RM de Leon: An artist who can’t be boxed in

“I live in a box,” says painter RM de Leon. “I have no studio. My place is small. If I have to do some painting, I just push everything around and work. If I have to do a large piece, I just drag everything to my relatives’ place a walking-distance away and work on my cousin’s veranda. It’s like artists in Japan, their space is so small yet they create huge pieces.”

This is typical thinking of someone who had been mentored by Roberto Chabet, prime exponent of Conceptual Art in the country. De Leon may live in a box but he lives free, and no box can contain or confine his ideas.

“We know shoes should be in pairs, but who says one cannot be white while the other is red?” he asks rhetorically.

This is characteristic of many of his artworks, which are all-around paintings. There’s no focal point and one can’t tell which is right or left, up or down—total freedom, art unbound.

This can be appreciated in the nonfigurative pieces in his latest exhibit “Dust Drawings and Other Works,” 83 pieces in acrylic and ink on archival paper, until Aug. 22 in Archivo 1984 Gallery, L/2, Warehouse 1, 2135 Chino Roces Ave., Makati City (beside King’s Court, through the gate of the Embassy of Grenada).

Ramon Manuel de Leon was born in Manila, the eighth of 10 siblings.

“From the start I thought I was creative,” he recalls. “I copied images from magazines and collaged them on the walls. Magugulat na lang ang daddy ko pagpasok n’ya sa boys’ room na parang Disneyland.”

The elder De Leon is a chemical engineer, “so he’s kind of rigid,” the artist says. “But he travels a lot, he can play ouedo on the piano and he’s so literate. He has read up on the lives of artists like Van Gogh, Botticelli.”

For college, “my father wanted to drag me to Mapúa, but it had this reputation for math, which I abhorred.”

He took up Industrial Design at University of Santo Tomas. After a semester, Soler Santos, a classmate since kindergarten at José Abad Santos Memorial School, urged him to transfer to the University of the Philippines College of Fine Arts, where Santos was enrolled.

He took up Advertising at UP. “But I saw that the seniors were doing the same thing, lettering, typography—and I thought, Hell, no, I’m not going to do this, this is not creative for me.”

When he decided to transfer to Studio Arts—“My father said, Magugutom ka dy’an—much worse, I majored in Painting.”

De Leon is now one of the leading artists of his generation. He received the Thirteen Artists Award from the Cultural Center of the Philippines in 1990. He was the first Filipino recipient of the Vermont Studio Center scholarship for Studio Arts program in Painting. Yet he feels as regular as ever.

“I go to the wet market, I cook my food, I wash the dishes, of course. After that, from 11 a.m. to 3 a.m., I just do whatever pleases me,” he says. “I do some gardening. I always have a six-pack [beer] with me. I drink but I’m not an alcoholic. I just drink while enjoying the plants. Then there are my DVDs. Or the paintings to be done. I just move on and on and on, until I retire at 4 a.m. So that’s my daily grind.”

A simple life is its own reward, as they say. At 55, he no longer embodies the restlessness of youth as he surely did when he was studying at UP.

“Bobby was like a Zen master,” De Leon reflects on his late mentor Chabet. “He taught me how to behave. Maybe he felt I was too loud, talkative, boastful. I cannot really tell what I was to him. Bobby and I used to go swimming every morning; we’d do lapping. Some thought I was a Chabet boy, but I wasn’t really a groupie. May pagkasutil din ako. For the most part, I was absent in his group shows.”

He reveals his mentor’s last text message to him before he died in 2013: “RM, you have a very good instinct. Follow it. And stop reading Clement Greenberg.”

Chabet was referring to the leading critic of modern art, champion of the avant-garde and kitsch, Abstract Expressionism and Post-Painterly Abstraction—whose ideas had obsessed De Leon. The message puzzles him because Chabet and Greenberg have similar ideas, in fact.

“That you have a responsibility toward art,” he explicates. “That [in the artist-gallery relationship] good business sense should justify the things that you do [the artworks]. Paint to paint paint, not houses, or flowers, or waves.”

In the mid-’80s, De Leon was sent by Pinaglabanan Gallery to do a show in Berlin with fellow artists Marcel Antonio, Agnes Arellano, Raymond Red. He spent three months in Europe, an exposure that led to a drastic change in his art-making.

His style turned from German Neo-Expressionism to Abstract-Figurative “na parang graphics na hindi; parang Keith Haring”—which the gallery owner who usually mounted his shows did not like, because it would be hard to sell.

“It’s hard to sell my works, and I don’t know why,” he concedes. “Some say because they’re on paper. But it is precisely that: The medium is the message. It is not whether it is on paper or canvas. It is whether it is art or not.”

De Leon is one of few artists who do not believe in art auctions. Saleability is not a sure indicator of quality.

“I use money as fast as you do,” he says. “I have no pretense for earning. But I will never sacrifice my work.”

He has modified some of the more radical stances of his college days, though, in terms of the style and substance of his art. “You cannot disengage the narrative from the formal.”

For 10 years now he has been teaching at De La Salle-College of St. Benilde’s School of Design. “That’s my bread-and-butter. I get paid for that. You don’t depend on painting. You don’t get a house for that.”

If he is invited to do an exhibit, he asks for at 3-4 months for preparation. He averages three shows a year, mostly joint exhibits.

He demonstrates the method of compositing imagery through the Rorschach effect, for which he is known. “You fold, unfold. If they match, then it’s done.”

As example, he shows his graphic of a tree, shrubbery and a strange flower, which is actually a Disney character he has reversed. “Viewers may see this as a sourcebook of plants, not knowing this bloom is palda ni Cinderella.”

The pieces are mostly untitled. In his latest show, though, for the series of drawings titled “All We Are Is Dust in the Wind,” he chose something kitschy à la Mike Kelley.

“I feel half the battle is won if you’re happy with your life,” he reflects. “And I feel so privileged to be an artist.”