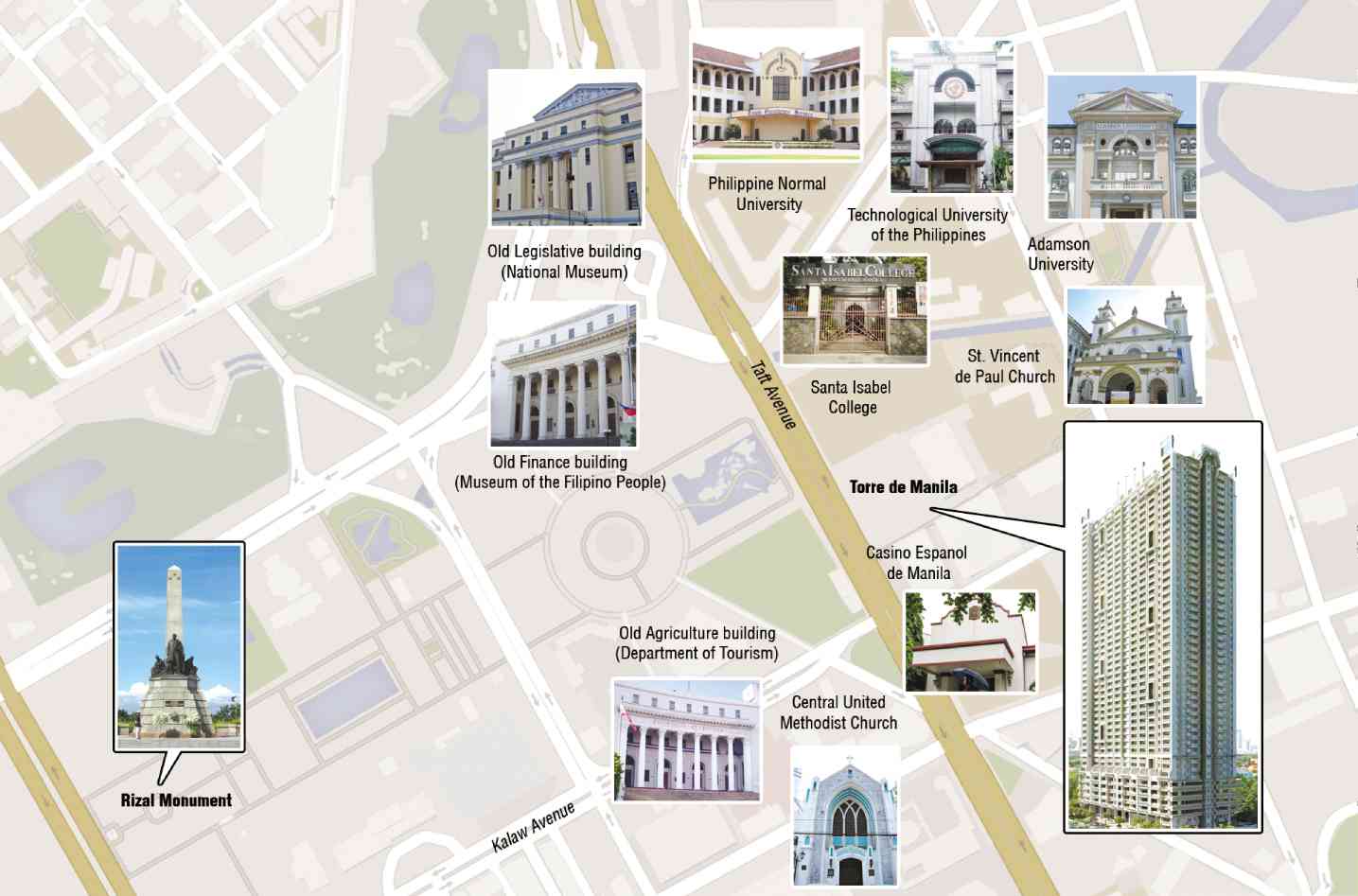 Torre de Manila was cleared for construction by the National Historical Commission of the Philippines (NHCP) and Manila City Hall despite being located in a virtual “heritage zone” and surrounded by several structures declared as national historical landmarks by government itself, for which, according to the NHCP’s own guidelines, they should be protected from “visual obstruction” and aesthetic “competition.”

Moreover, such landmarks, according to the NHCP guidelines, should be protected from such threats as “adjacent construction activities that may adversely affect historic sites/structures.”

The 49-story Torre de Manila is now the subject of a petition for demolition by the Knights of Rizal with the Supreme Court for allegedly destroying the view of the Rizal Monument.

These sites have been awarded markers by the NHCP and are considered “national historical landmarks and/or national historical sites” under Republic Act 10066, the National Cultural Heritage Act of 2009, and are therefore protected by law.

Located on Taft Avenue, Santa Isabel, which was founded in 1632 during the Spanish era, making it the oldest school for girls in the Philippines and one of the oldest in the world, stands right beside Torre de Manila, which dwarfs it.

Although the original Santa Isabel was in Intramuros and was destroyed during the Second World War, the Taft campus used to be Colegio de Santa Rita, another historically important institution. The Taft campus was purchased after the war by the Daughters of Charity, the congregation that now runs Santa Isabel.

Beside Santa Isabel is the PNU dormitory. Across the dormitory on Burgos Street is PNU itself, the first full teaching school in the country, which has no less than two historical markers put up by the NHCP.

Casino Español is the leisure club of the Spanish community starting from the late 19th century. The original building on Kalaw Street was designed by Juan Arellano but was destroyed during the Second World War. The building as it appears now was constructed in 1951 and was designed by National Artist for Architecture Jose Ma. Zaragoza.

Saint Vincent de Paul Church started as a chapel in the late 19th century during the Spanish era. The present church structure was built in 1912, making it more than 100 years old.

Adamson was established in 1937 originally as a private college offering industrial chemistry and engineering courses. It is now run by the Vincentian fathers.

The Vincentian university later used the remnant to reconstitute the relief and create a replica that now adorns the façade of one of the buildings on its 4-hectare campus.

TUP is the former Manila Trade School established in 1901.

Founded in 1899, the Methodist Church is now a cathedral and is the oldest Protestant church in the Philippines. The original structure was designed by Arellano.

The cluster of historic sites, which may as well include the Rizal Monument and Luneta (known during the Spanish era as Bagumbayan), should mean that they form, according to R.A. 10066, a “heritage zone.”

The heritage law states that a heritage zone “shall refer to historical, anthropological, archaeological, artistic geographical areas and settings that are culturally significant to the country, as declared by the National Museum and/or the National Historical Institute” (now NHCP).

The law states that the NHCP and NM should declare heritage zones for the protection of the historical and cultural identity of a particular area in coordination with the National Commission for Culture and the Arts and the Housing and Land Use Regulatory Board.

The local government unit is tasked by law to maintain a heritage zone where that zone is located.

Under Section 13 of R.A. 10066, it is provided that the “appearance of streets, parks, monuments, buildings and natural bodies of water, canals, paths and barangays within a locality shall be maintained as close to their appearance at the time the area was of most importance to Philippine history as determined by the National Historical Institute.”

Heritage zone, or “historic center,” is separately defined by the NHCP Guidelines, Policies and Standards for the Conservation and Development of Historic Centers/Heritage Zones, as a “designated area with historical and other special significance, consisting of buildings or group of buildings and their environs that collectively contribute to the area’s importance and character.”

The guidelines for example note that one of the offenses against historic or heritage sites and structures is the “visual distraction or obstruction, including power and telecommunication poles and cables.”

Another offense is “competition,” which is defined as “a structure that competes with or subordinates a historic/heritage structure.”

The guidelines also identify a number of threats such as “conflicts with building, fire, electrical codes and local ordinances” and “adjacent construction activities that may adversely affect historic sites/structures.”

Major construction activities around important heritage sites are discouraged by conservation conventions and guidelines of the United Nations Educational, Scientific, Cultural Organization (Unesco) because they may weaken the structural intergrity of the cultural structures and lead to their collapse.

Protection of historical landmarks is part of the mandate of the NHCP. Republic Act 4368, the 1965 law creating the “National Historical Commission,” directs the NHCP to “maintain and care for” monuments and landmarks.

The NHCP Guidelines defines a prohibited building as “any structure or establishment that pollutes the environment, obstructs or does not conform to the historical character and/or cultural value of the historic center/heritage zone.”

All non-conforming buildings, the guidelines say, should follow the requirements.

The non-conforming buildings should “conform to or harmonize with the existing characteristics of the site, as to encourage a progressive urban growth anchored on a peaceful coexistence of various historical periods.”

One of the measures by which a monument’s dominance of the vista is maintained is to “keep vista points and visual corridors to monuments clear for unobstructed viewing appreciation and photographic opportunities.”

The setting of monuments, according to the NHCP Guidelines, “extends to surrounding areas.”

The NHCP Guidelines quotes Article 6 of the Venice Charter on Conservation: “The conservation of the monument implies preserving a setting, which is not out of scale. Wherever the traditional setting exists, it must be kept. No new construction, demolition, or modification, which would alter the relations of mass and color, must be allowed.”

Other historically and architecturally significant structures in the vicinity of Torre de Manila are the American-era old Agriculture and Finance buildings on Agrifina Circle, which are now the National Museum of the Filipino People and the Department of Tourism. (The latter will become the soon-to-open Museum of Natural History, also under the National Museum.)

Last October, the Inquirer reported that the National Museum was considering declaring that part of Ermita as a heritage zone.

However, the proposed declaration is only limited to the neoclassic buildings from Pedro Gil Street to the Post Office building on the banks of the Pasig River.

As of press time, the declaration has not been done, said National Museum acting assistant Director and Cultural Properties Division chief Angel Bautista.

Despite its own guidelines protecting monuments and historic sites from “visual obstruction” and “competition, the NHCP did not oppose DMCI, the Torre’s developer, which in its original application said it was constructing a 40-story building.

NHCP also did not oppose the DMCI when it sought an exemption from the Manila city government so that it could add nine more floors.

Early last year, DMCI appealed to the Manila City Council for zoning exemption since it said it had obtained permits and passed all of the requirements. Its request was granted by the Manila Zoning Board of Adjustments and Appeals.

After the grant of exemption, Manila Councilor Ernesto Isip authored the resolution supporting the zoning exemption.

This resolution was passed, which paved the way for the construction of the 40-story high rise. It was signed by Councilor Joel Chua, the presiding officer.

In the resolution, no mention was made that City Hall had consulted with NHCP or any of the cultural agencies. No mention was also made of the National Cultural Heritage Act of 2009.