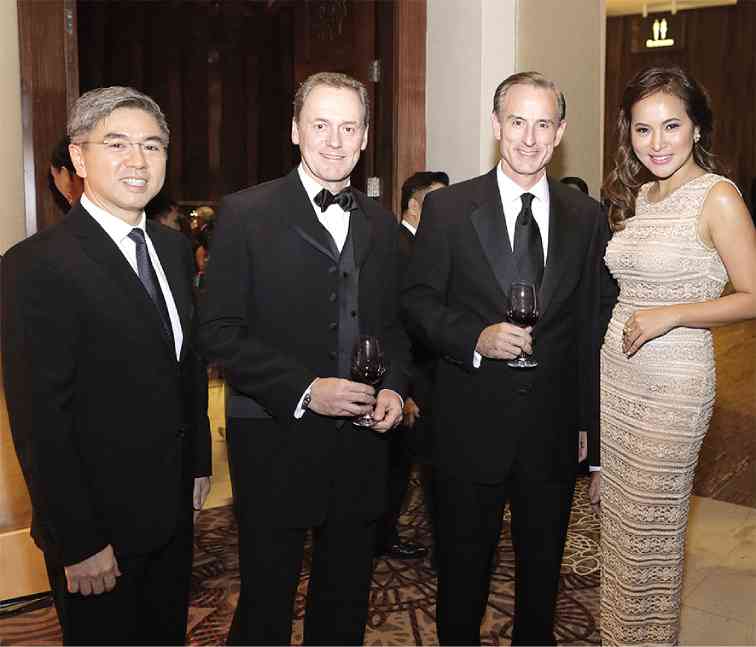 The hall was the perfect setting for the 90-minute concert of the R&B soul singer.

Some 1,700 guests were regaled by James with his greatest hits, such as “Just Once,” “PYT” and “How Do You Keep the Music Playing.”

His concert was preceded by spectacular performances by Lani Misalucha and Mark Mabasa.

The concert extravaganza was taken to greater heights by the five-course dinner prepared by executive chef Meik Brammer and his award-winning culinary team.

Marriott’s Grand Ballroom has proven itself to be the next big thing.

Now, wouldn’t it be grand if you were seen there, dahlings?

YouTube Fan Fest, the most happening party that takes place in different parts of the world, has officially landed on our shores.

With free-flowing drinks all night, the party was a certified rousing hit, palangga.

The YouTube event was truly sensational and indeed House Manila proved to be the country’s global VIP Club hosting the brightest online stars.

It was one helluva Pinoy hip-hop wild bash at Quirino Grandstand as the historical landmark hosted the first edition of MTV Music Evolution in the country and Asia.

Presented by the Tourism Promotions Board (TPB), the concert spotlighted the emergence of hip-hop music while featuring the best of Philippine music and culture to international youth audiences.

“MTV Music Evolution 2015 serves as one of the major pillars of Visit Philippines 2015 campaign,” said TPB chief Domingo Ramon Enerio III. “This event will highlight the Philippines as a destination, not just for culture and adventure, but for entertainment as well. We are also fortunate to find the perfect partner with MTV as they have the global platform to promote the event and showcase our talented Filipino artists.”

Around 22,000 hip-hoppers came to take part in the celebration, which opened with Gloc-9, Abra, Loonie, Ron Henley and the Lyrically Deranged Poets pumping up the crowd’s adrenaline with their jaw-dropping wordplay and head-nodding beats.

Apl.de.ap also performed some of his original songs, including the mega-hit “Where Is the Love?”

The party climaxed to the wild beats of the Grammy-winning act Naughty by Nature.

Donning “Filipino by Nature” T-shirts, the trio performed their hits and played a clip of Francis M.’s “Kaleidoscope World” as a toast to Pinoy hip-hop culture.

All the artists later shared the stage with them to sing “Hip-Hop Hooray!” along with the crowd.

As the confetti exploded, Naughty by Nature hollered, “This hip-hop is history in the making!”

MTV Music Evolution Hip-Hop is only one in the series of fun events featured by Visit the Philippines Year 2015 campaign.

Our very own palangga, ace photographer Alex Van Hagen, celebrated his birthday a month after the actual date.

Gathering his close pals, he hosted an afternoon tea with heavy early dinner catered by our celebrator’s pal, Millie Reyes of The Plaza, held at the sprawling, well-interiored house of Nini Licaros in a posh Makati village.

It was a super-nice time for everyone with loads of gossip on fashion and who’s in, who’s out of high society and government. But my lips are sealed on those matters, dahlings, at least for now.

Cheers to my palangga and soulmate, Alex Van Hagen!