Not that extraordinary–but extremely good for money | Inquirer Lifestyle 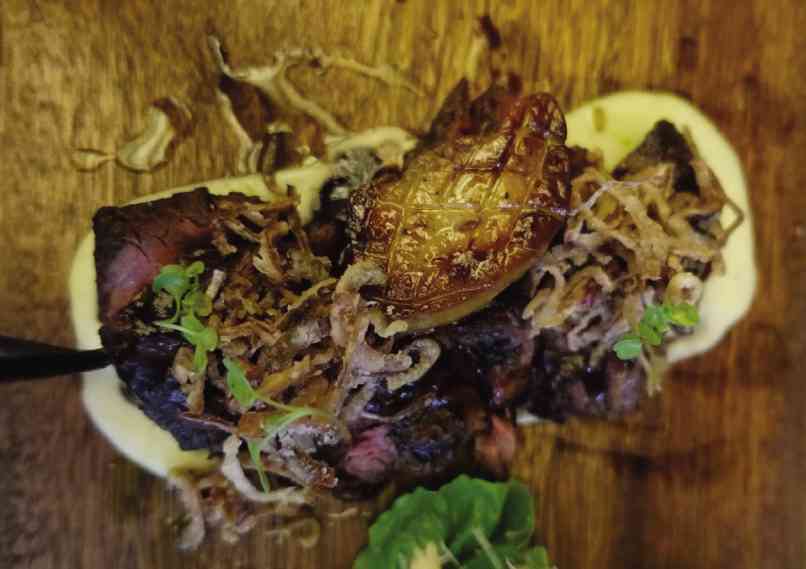 Not that extraordinary–but extremely good for money

Hunger, the old saying goes, is the best sauce: It makes everything taste good. Chefs can’t cook properly when they’re hungry. Restaurant reviewers shouldn’t review when they’re hungry. The food we eat when we’re abroad tastes especially good because we’re much more active than we usually are, and are likely to be influenced by ambience and rosy memories as well. This often means that what seems sublime in one setting may not transfer well to another.

The Todd English Food Hall in New York is within the Plaza Hotel, the hallowed upper Manhattan rival to the grande dame Waldorf Astoria down south. It is posh food in a smart-casual setting, which is something I like very much, definitely much more than its opposite, cheap food in a stuffy, opulent setting.

But while the Manhattan branch of the food hall is ensconced within the Plaza, the Manila branch is on the top floor of a mall, and its windows look out onto a construction site and the monotonous façade of the Serendra apartment blocks. If hunger is the best sauce, setting and expectation must also be among the better sauces in the firmament.

It’s a gorgeous, dramatic space that easily outclasses the in-store dining of many famous department stores: The labyrinthine cafeteria of the Galleries Lafayette or the overpriced and measly benches of the top-floor dining at Harvey Nichols come to mind.

We arrived hungry enough and were duly impressed by the interiors; it struck me as just the right sort of brasserie-like space that we need more of, though ideally a hall like this should be filled with the buzz of happy diners, rather than techno dance music that was giving me flashbacks of party days at the turn of the millennium.

They were serving a lunch menu in addition to the full range of the menu; and an impressive menu it was, too. Whatever price point you wanted, whatever kind of cuisine, whether you wanted to chill with a cocktail or eat a lavish meal—all of it was apparently available.

I was at a loss. Did I want to have fresh oysters followed by tapas for a light lunch, or did I want American-style sushi?

I had heard good things about their pizzas, but I also wanted to try an intriguing duck dish on the menu.

In the end, practicality won out, and my wife and I had the lunch specials, which at P650 came with salad and starch in addition to the mains, in my case a hanger steak.

And the “OMG” dessert was included in the price; I couldn’t resist an optional slab of foie gras for an additional charge. We ordered a bolognese pasta for the kid.

There was no fault I could find, but unfortunately I can’t say that it was extraordinary, either.

I can attest that it was good value for money, because the steak was larger than any sane man should eat at that hour of the day, and the OMG dessert was more along the lines of WTF: chocolate upon chocolate upon chocolate in excess. Show me the person who actually finishes this dessert, and I’ll show him the way to my diabetes specialist at St. Luke’s.

The best dish of our meal turned out to be the pasta, which was not just very decently priced but also a truly outstanding bolognese with bechamel sauce and rigatoni cooked to perfection. We consoled our daughter for eating all her pasta with her choice of macarons from the station with the revolving Ferris wheel.

The problem with the Todd English Food Hall may not be the food, although some of it has the generic feel of a very luxurious business-class lounge. The prices are extremely good value for money, and if you’re willing to go up one more escalator you can get an excellent pasta or pizza for what you’d otherwise squander in one of the many mediocre restaurants in the building.

But while Todd English is confusing enough (I’ve read more than one blog refer to him as British, because of his name; he is from Boston), the “Food Hall” bit really throws people off. It makes it sound like an expensive food court, which it isn’t.

It is not a sit-down buffet either, as it has been uncharitably described.

It’s simply a large, eclectic restaurant. In trying to be all things to all people it ends up being treasured by none.

Despite all this, I would go back. It’s a sign of how well we eat in Manila that merely being competent is no longer good enough, but I’m convinced that hidden in the extensive menu are some standouts, while the rest of it is fair to presentable.

A shame, though, about the view: It would take a lot of Cosmopolitans for it to start looking like Central Park.