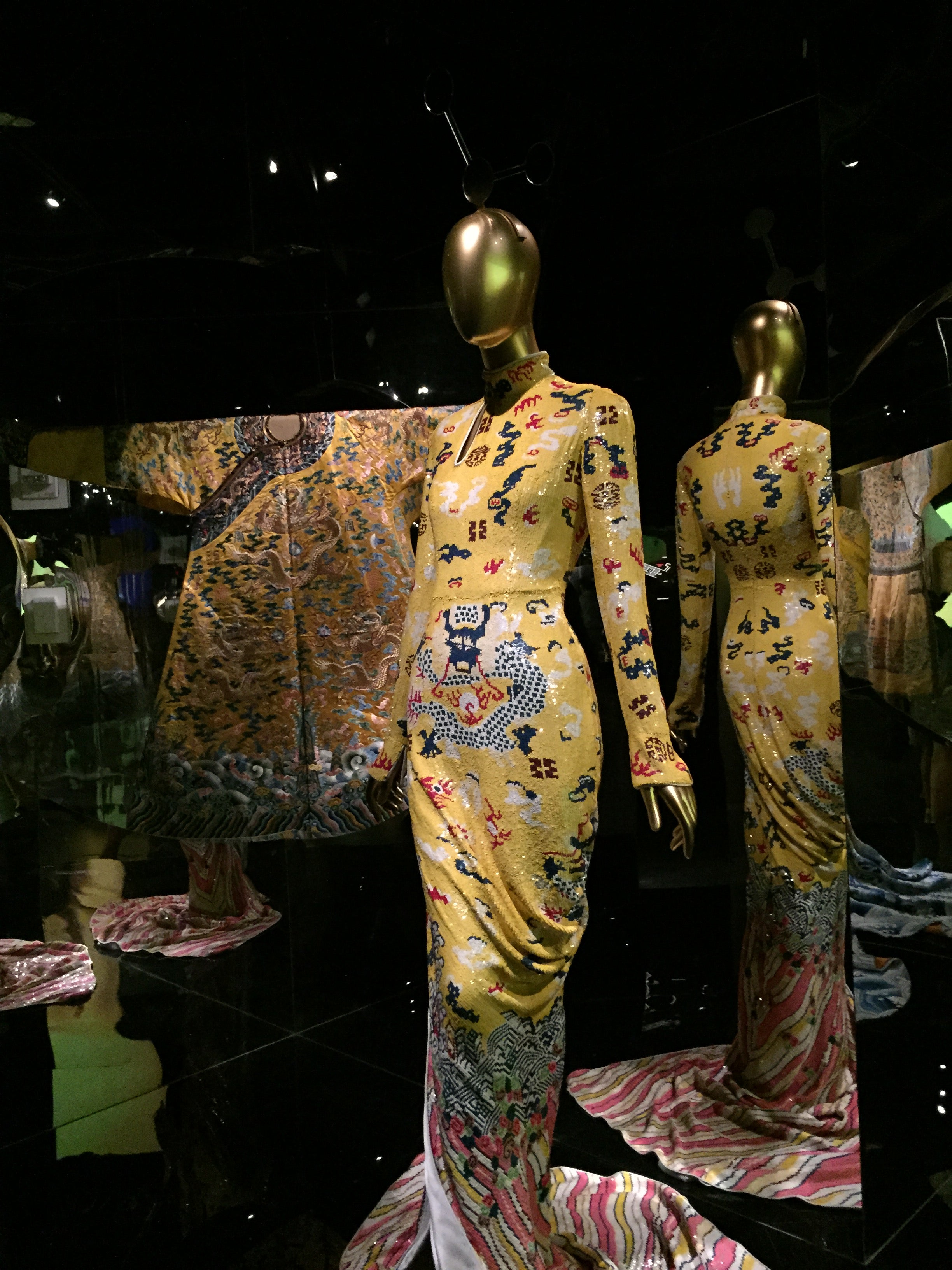 Searching in vain for China in Anna Wintour’s Met exhibit

As children, anyone digging a deep hole was sure to be warned: “Be careful! You might end up in China!” We had lapped up comics and cartoons spewed by the Unites States, with characters whose excavations brought them to the opposite side of the planet. There the buildings had pointed roofs and, most importantly, everything was upside down.

Of course, our geography was wrong. Filipinos traveling right through the Earth’s core could certainly not resurface in China, which was just north of us. With our American counterparts, we had constructed an image of the Chinese as living far away in an alien, exotic world that defied gravity itself.

Ideas of distance and difference have always affected the way the Chinese were viewed by Western Civilization. This can be gleaned from the new exhibit of the Metropolitan Museum of Art (New York) Fashion Institute, “China: Through the Looking Glass.”

The title is a reference to Lewis Caroll’s novel, where a mirror is the gate to a “topsy-turvy and back-to-front” realm. The curator, Andrew Bolton, suggests that “the exhibit is not about China per se but about the image of China that exists in the Western imagination.”

The show’s introduction mentions the late Edward Said, who cautions that inventive imaginings on foreign cultures often resulted in trivialization and stereotyping. Professor Said’s warning, being a potential spoiler, was deftly neutralized by the wall texts’ assertion that the exhibit would be less politicized. The focus was the “unbridled creativity” coming out of the West’s encounters with China that also gave rise to “a layered series of exchanges.”

The exhibit’s vast sprawl necessitates an initial critique: The layout should be posted to guide us through the labyrinthine halls. Easily missed is Guo Pei’s incredible gown of golden panels that resembles a precious offering in a Buddhist temple. Guo Pei was also responsible for Rihanna’s controversial yellow extravaganza which she wore to the exhibition Gala.

I likewise found memorable a pair of giant screens on which were projected clips from Bertolucci’s “The Last Emperor,” while the film’s score blared in the background. So compelling were the music and the visuals that I had to suppress the urge to flit about while imagining rows of courtiers following me.

The screens faced each other, forming a corridor with Puyi’s festival robe at the end. Imperial raiment became the inspiration for a host of creations, ranging from Dries Van Noten’s yellow fox fur ensemble to Tom Ford’s sequined gown which was rumored to have required a special phone call from Anna Wintour to secure.

This section articulates one of the exhibit’s main premises: that films were important mediators in the encounter with China. They were the conduits through which the creativity of writers, directors and designers helped shaped public perceptions among Western audiences. Screen portrayals like those of

Anna May Wong and Nancy Kwan—both attired in qipao—helped fuel the perception of Chinese women as inscrutable vamps and sirens.

For all its spectacles, I could discern that the Met show perpetuates, perhaps unwittingly, some of the negatives notions of the West. This is best seen in the Astor Court where the gray-tiled floor has been replaced by a shiny black surface evoking a bottomless toxic pool. The ceiling is dominated by an ominous orange moon. Dramatic lighting creates shifting shadows punctuated only by John Galliano’s fantastic creations inspired by the Beijing Opera.

The Astor Court recreates a scholar’s garden and is therefore a man’s domain. Yet it has been overlaid with cues that in China represent the female principle: the moon, darkness, wetness. The harrowing overtones help construct another stereotype: being Chinese is being feminine as well as mysterious and frightening.

What makes the feminization more problematic is that, in the West, this is a strategy for negation. In contrast to Flash Gordon with the tight outfits, his rival, Ming the Merciless, wore too much make-up and a flowing gown topped by an Elizabethan collar. Ming is marked as a man who was womanish, an aberration whose destruction by the macho hero was therefore justifiable.

A section labeled “Chinoiserie” celebrates clothes based on Chinese objects. Here are Karl Lagerfeld’s exquisite suits with motifs adapted from room dividers. Here, too, is Cristobal Balenciaga’s dress with an outline and floral designs mimicking those of a vase. Balenciaga’s work is a prelude to an entire hall filled with couture inspired by blue and white ceramics.

Unsaid is the existence of discussions like that of Vanessa Fielding. She opines that the 18th-century demand for Chinoiserie as supported by women collectors was perceived as challenging the classic style, a male province. In this example, Chineseness was not only equated with the feminine, it was also threatening the status quo.

The perception grows that China has come to be known only through its products. Chinese people are seen as sources for objects of envy: silk, porcelain, room dividers. Even the exhibit’s forest of illuminated tubes and futuristic fashion evoking the film “Crouching Tiger, Hidden Dragon” is a reminder that something as esoteric as a martial art is now a traded good.

Commercialization manufactures stereotypes from which this exhibit has not managed to break free. Dialogue is hampered and confusion reigns. This situation is exemplified by the Dior dress printed with deceptively charming calligraphy which turns out to be a complaint about stomach ache.

Despite its many captivating tableaux, the exhibition does not meet its proclaimed goals. Though exchanges are promised, the conversations are suppressed. Where are the Chinese designers? Where are the Chinese perspectives? Where is the other half of what was supposed to be an interaction?

Sadly, Chinese garments are just here to be copied, not to share their tales. There are very few stories about the impact of the West on the clothes production of China. Nothing gives an inkling that cultural exchanges are never about understanding and inspiration alone. There are always contradictions and reversals.

The Met show does not allow the Red Guard outfit to relate how it acquired its pants, buttons, collar and cap to mirror Western garb and present the Chinese masses to the world. Inspired by European ideologies, it proffered a worker’s utopia where everyone was uniform and no longer in thrall to the whims of fashion as the spawn of capitalism and clothing.

The qipao, too, was stifled by the show’s organizers. With so little exhibit space devoted to its history, it was unable to recount how it evolved from its traditional forbears in an attempt to mirror Western tastes. It could not confide how, with the help of the zipper, it would allow the Chinese woman more mobility, striding confidently with feet unbound. How and why did the movies turn this garment from emancipatress to seductrix? The exhibit provides no answers.

Also worth pondering is how different forces unleashed by China’s confrontation with the West—morality, nationalism, revolution and fashion —finally intersected so that dress would spell one woman’s tragedy.

Wang Guangmei, former First Lady, was often pictured elegantly turned out in a qipao. Eventually, she was targeted for public ridicule during the Cultural Revolution. She was ordered to don an outsized qipao over a standard workman’s attire before being draped with a chain of ping pong balls representing her pearl necklace. I will never forget her photo with arms painfully pulled from behind, head bowed, as she was being exposed to a vast taunting assembly. This image’s absence from the exhibition is just one example of what is lost when the Chinese side of the narrative is silenced.

The Met Fashion Institute has already done another show in the past on how Western designers were influenced by China. It is now time to tell fuller stories by giving all sectors, at last, their voices.

The exhibit runs until Sept. 7.