Above the Clouds: Beyond tragedy, and after the storm | Inquirer Lifestyle ❮ ❯ Above the Clouds: Beyond tragedy, and after the storm 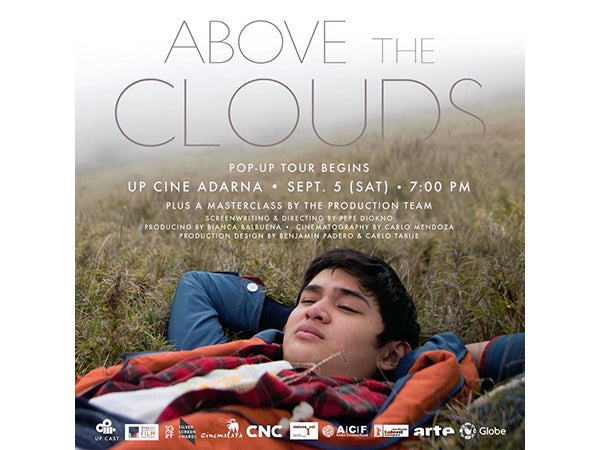 Local cinema currently thrives on comedy, teen romance and drama. It is easy for a filmmaker to exploit viewers’ emotions to make them laugh or cry with a distressing and often exaggerated depiction of reality.

“Above the Clouds,” written and directed by young indie filmmaker Pepe Diokno, is a film inspired by a tragedy—Tropical Storm “Ondoy” which devastated the country in 2009.

However, “Above the Clouds” is not the usual melodrama often associated with true-to-life stories.

It had its world premiere last year at the Tokyo International Film Festival, where it was warmly welcomed by both locals and OFWs in sold-out screenings. Japan is no stranger to tragedy; the 2011 Tohoku earthquake and tsunami comes to mind.

Diokno, meanwhile, is no stranger to the sound of applause from an appreciative audience. His first film, “Engkwentro,” which premiered at the Venice Film Festival in 2009, won Best Debut Film and the Orizzonti Prize for new trends in cinema at the festival.

It has also received accolades from the Jeonju International Film Festival, Gawad Urian and Cinemalaya, which bankrolled “Engkwentro.”

“Above the Clouds” had its Philippine premiere recently at the 2015 Cinemalaya.

While “Engkwentro” was a dark, gritty tale of crime and corruption, “Above the Clouds” couldn’t be farther from its predecessor. There are two main characters: 15-year-old Andy (played by up-and-coming actor Ruru Madrid), who lost his parents during a storm; and his cantankerous grandfather (Pinoy rock legend Joey “Pepe” Smith), who takes the boy under his care.

At the start, the plot seems to be serious drama, but it turns out not depressing at all. Aside from canned news footage, there are no visuals directly reminiscent of “Ondoy”—no scenes of people struggling against the floods or walking amid a wasteland.

Instead, there is the breathtaking scenery of Mt. Pulag, Sagada and Baguio. For viewers who have not had the opportunity to explore the mountainous regions of the country, the scenes are ethereal and extraordinarily beautiful.

Credit goes to Diokno and his director of photography, Carlo Mendoza, for juxtaposing almost otherworldly elements with reality that bites.

It took Diokno two years to write the screenplay. Although the plot was initially inspired by “Ondoy,” the idea evolved after the death of Diokno’s grandmother in 2011. “A lot of the feelings and grief I felt over that period, I poured into this film,” he said. “What I realized is that when a person—a loved one— dies, you don’t just lose a person, you lose a memory, you also lose a part of who you are.”

Andy, the protagonist, is an extension of Diokno’s grieving self.

The film, however, does not indulge in self-pity. It is, apart from the compelling visuals, wildly enjoyable and even offers comic relief, thanks to the awkward moments and clever dialogue between the two main characters—especially Smith.

His portrayal of the grandfather who brings the reluctant Andy to the mountains hoping to impart a few life lessons, and perhaps to make up for years of abandonment, is at all times natural and spontaneous.

In an interview with Inquirer Super, Diokno reveals that the granddaddy character was written particularly with the rock icon in mind.

“It was Pepe Smith, only Pepe Smith,” says Diokno. “Many people couldn’t imagine Pepe Smith acting. But there was a feeling.”

What unfolds onscreen is Smith as a real-life 67-year-old, except that he plays a retired photographer with a 15-year-old grandson.

Smith was actually reluctant to accept the role. He knew that it would be totally different from his persona. He admitted not really knowing how to act.

But upon Diokno’s confession that the role was written for him, and under the condition that the director would be there to guide him all throughout, Smith agreed.

Young actor Ruru Madrid got his break through a local television talent search. Although “Above the Clouds” is his first film, he has since starred in two other movies.

His portrayal of Andy was likewise inspired and unguarded. Like Andy, the actor was only 15 years old at the time of the shoot; he also had first-hand experience as a Marikina resident who saved his neighbor from drowning at the height of “Ondoy.”

Diokno notes that he already knew Madrid would be perfect for Andy’s part the moment he saw the boy.

“It’s just a feeling that you get, and I can’t explain it,” says Diokno. “But when I see a person I can know na, this guy’s perfect.”

“Above the Clouds” is, in part, Diokno’s poignant love letter to his beloved grandmother. But the film also serves as a reminder of the beauty of the Philippines, and of life in general. It presents a refreshing, altogether different flavor in local cinema.

Instead of painting a dismal image of the human condition and igniting painful memories,   “Above the Clouds” focuses on the life that must ensue when the eye of the storm—figuratively and literally— passes. It tells us that life is not about the things you lose, but the things that remain.

If you missed the screenings at Cinemalaya, there will be another one on Sept. 5, 7 p.m., at the Cine Adarna (formerly UP Film Center), organized by the student organization UP Cinema Arts Society (UP CAST).

After the screening, there will be talks on writing and directing by Pepe Diokno, producing by Bianca Balbuena, cinematography by Carlo Mendoza, and production design by Benjamin Padero and Carlo Tabije.