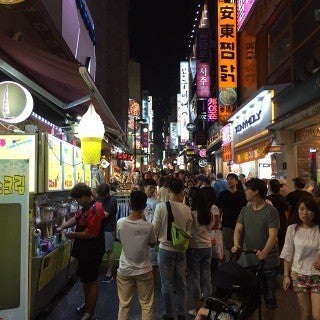 Myeongdong, a famous shopping district in Seoul, is filled with shoppers at night.

Even while still awaiting the World Health Organization’s official statement, the Korean Tourism Organization (KTO), including its Manila office, immediately went to work and encouraged tourists to book reservations to South Korea. KTO worked with airlines to bring in travel agents and journalists in order to prove that South Korea, particularly the city of Seoul, is MERS-free.

According to Sang-Wook Bae, general manager of Korean Air in Southeast Asia and Oceania, tourist arrival dropped by 30 percent since the outbreak.

Sang-Wook said the biggest drop in inbound travel came from the biggest markets: China and Japan along with Hong Kong and Taiwan.

A conscious effort to launch a super sale in the busy streets of Seoul is one of the government’s strategies to recover from the slump in tourist arrival. From shops in the busy streets of Myeongdong to the department stores and boutiques in Seoul, Korean establishments offer big discounts especially in beauty products.

Conspicuously displayed on buildings is the announcement of the super sale offering as much as 50 percent discounts exclusive to international travelers. The duty-free shops are swamped with customers taking advantage of the huge price slash.

The ghost of MERS-Cov was no longer evident during the three-day commemoration of South Korea’s liberation from Japanese Occupation over the weekend of Aug. 14-17. Domestic and foreign tourists flocked to the streets and street performances were held as part of the celebrations.

South Korea has established itself as a premier tourist destination, boasting of rich cultural heritage as well as contemporary architecture represented in its skyscrapers.

As if these were not enough, the country is now gearing to capture the medical tourism market by building a medical facility 30 minutes away from Incheon International Airport.

Heidi Kim, section leader for marketing and global affairs of INHA, said the center was looking at tourists with long layovers at Incheon airport with connecting flights to the west.

Face contouring will cost a patient about $700 and 60 minutes off the layover time excluding the recovery period, while ulthera lifting (face-lift) will take only about 60 minutes and a dent of $2,200 in the patient’s wallet.

Other hospitals that offer the same services are in Seoul, about an hour away from the airport, said Kim.

Sang-Wook said Korean Air was aiming at winning passengers it lost during the three-month crisis. The country’s top flag carrier reported a $144 million net loss for the April-June period.

South Korea has an average of 14 million tourist arrivals with 2.3 million coming from parts of Asia.

About 10 percent of Korean Air’s transit passengers are overseas Filipino workers, according to Sang-Wook. About 35 percent of its customers are from Korea headed for other destinations.

In spite of the losses and the MERS-Cov outbreak, Sang-Wook said the airline was making an investment on a new terminal in Incheon that would be exclusive for Korean Air.