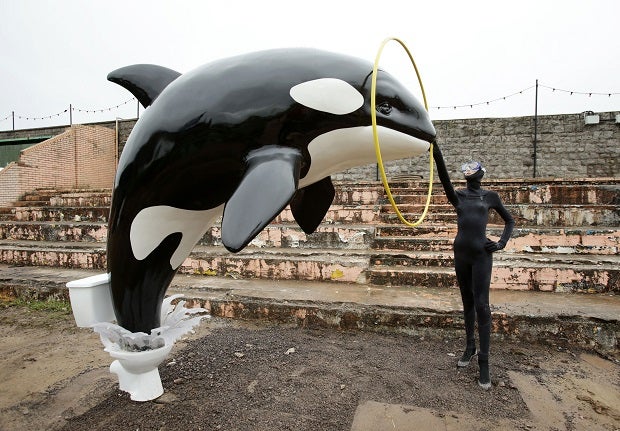 A Banksy piece depicting an orca whale jumping out of a toilet is displayed at Banksy's biggest show to date, entitled 'Dismaland', during a press viewing in Western-super-Mare, Somerset, England, Thursday, Aug. 20, 2015. PA Wire via AP

LONDON — The elusive British graffiti artist Banksy has unveiled his latest project — a parody of a seaside theme park called “Dismaland” complete with a derelict castle, a dead Cinderella and a Grim Reaper in a bumper car.

The artist, best known for his subversive, stenciled street art, said it was a “festival of art, amusements and entry-level anarchism.”

“I guess you’d say it’s a theme park whose big theme is theme parks should have bigger themes,” he said in a statement.

While Banksy said it was “not a swipe at Disney,” it’s difficult to ignore the reminders of Disneyland — from the gray castle and the skewed sculpture of Ariel the mermaid in front of it, to the exhibit of Cinderella in her carriage. Only this princess hangs out of her crashed carriage, apparently dead, as paparazzi look on.

The project, staged in a run-down site in southwestern England’s Weston-super-Mare, is Banksy’s biggest show to date. It includes new works from Banksy, as well as art galleries featuring some 50 international and British artists including Damien Hirst. Musical performances and arcade games complete the experience.

Among the exhibits: a sculpture of a woman attacked by a cloud of seagulls, a killer whale leaping out of a toilet bowl and a pond where visitors can steer model boats crammed with migrants.

Local residents had been kept in the dark about the project, and were told the space was being turned into a film set.

The park opens to the public Saturday and runs until Sept. 27.

Judging from the early response, it’s set to be a hit: Long lines formed outside the park Friday as people waited to get in for a viewing day reserved for local residents. Online, the official website was down for most of Friday as it apparently crashed under the flow of traffic.

Banksy, who has never disclosed his full identity, began his career spray-painting buildings in Bristol, England and has become one of the world’s best-known street artists.