From cartoons to a classic aesthetic | Inquirer Lifestyle ❮ ❯ 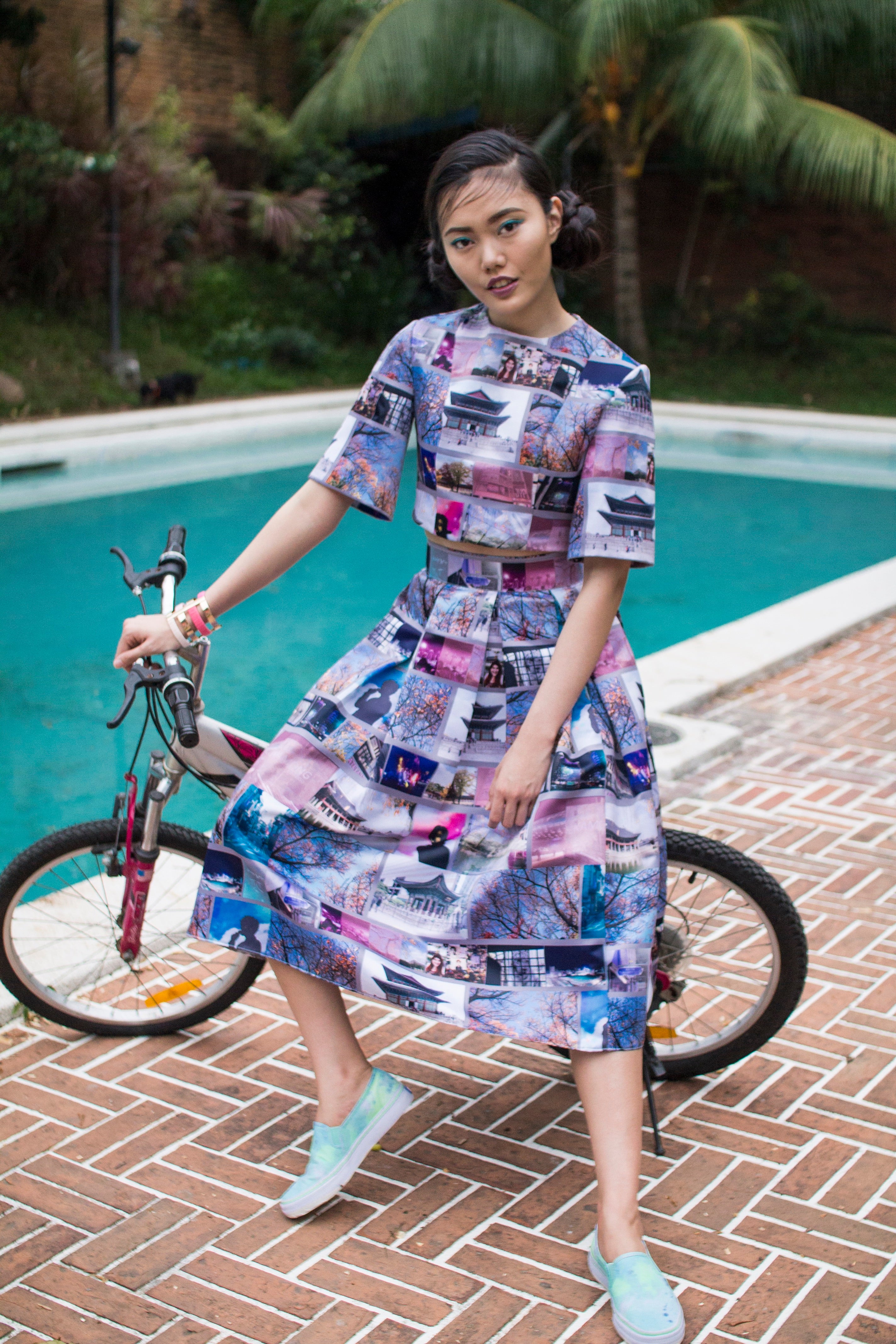 PUYAT used photos from her Korea trip to create fun prints for her collection.

From cartoons to a classic aesthetic

FUSION—whether in food or design—is a tricky thing to pull off. One must have a clear idea of each
and every element that goes into the mix to know what combination works
and what does not.

It takes a sharp eye and talent to avoid getting lost in the process of creating a harmonious balance between different concepts. This is evident in the work of young designer Victoria Puyat.

Puyat’s three-piece collection— showcased at “Unbound,” the De La Salle-College of Saint Benilde (DLSCSB)
graduation runway event for its Fashion Design and Merchandising students—was a head-turner, described
by those in attendance as “classic with a twist.”

Her array of evening gowns earned praises from fashion writers and editors as well as co-student designers who gave a nod to her feminine and sophisticated yet fun and youthful aesthetic.

Puyat hit the sweet spot between classic and modern designs. She incorporated clean, timeless silhouettes
from the 1950s and ’60s with images she took of the traditional yet ultramodern city of Seoul, which she had custom-printed on her fabric.

Taking notes from her favorite designer Kate Spade and Mary Katrantzou, Puyat proved that marrying classic
and modern aesthetics could result in chic ensembles that appeal to young women who want to look polished without compromising on fun and color.

Puyat also cited multi-awarded costume designer Coleen Atwood as another influence, and admitted having been heavily influenced by anime and K-pop while growing up. “I really liked anime. I don’t know
how I started drawing, but I would always draw anime or cartoons,” said Puyat.

She went on to redesign the outfits of her favorite characters, making them more casual and modern. Little
did she know she was slowly treading the path toward a fashion career.
By seventh grade, Puyat got even more interested in drawing clothes and went on to design them for real
people. In her first sartorial attempt, she did a varsity jacket for the “Chain Gang Soldiers,” the moniker she and her friends adapted for their group whose members were all into wrestler John Cena.

“It was well received but nothing happened. But that’s when I thought, ‘Hey, I can do this design thing!’” said Puyat.

She continued practicing her sketches on fairy tale characters such as Tinkerbell, Little Red Riding Hood and “Little Mermaid’s” Ariel, dressing them with modern versions of their original costumes.

By the time she finished high school, her heart and mind were set on pursuing fashion design. She entered DLSCSB to take up Fashion Design and Merchandising.

On her first year, she did sketches of colorful street fashion heavily influenced by K-pop. Groups like f(x) and Shinee, with their vibrant and young wardrobe concepts, encouraged Puyat
to use bold color palette and patterns.

As her skills developed, she explored colorful and playful designs laid on sophisticated, elegant fabric and silhouettes. This was evident in her earlier designs for her class requirements that were used in editorials for fashion magazines.

Her “Tetris dress,” reminiscent of the mod style of the ’60s with a colorful pattern inspired by the Russian tile-piling video game, and her “LBD with lace appliqué,” in which she updated the classic little black dress and gave it a youthful treatment, are two examples.

Puyat can open a shop and start her own line if she wanted to. However, even with her talent and capability, she humbly admitted that she’s still a rookie. “I don’t want to have my own line
yet because I don’t have any experience in [having my own] business,” she said, adding that, at this point in her life, working with more experienced designers would be more beneficial
to her artistic growth.

Currently she’s beefing up her portfolio by taking up a bag design course at the Fashion Institute of the Philippines.