Known for hosting world-class theater productions since it opened its doors back in 2010, Resorts World Manila’s (RWM) award-winning Newport Performing Arts Theater (NPAT) turns on its bright lights for yet another Broadway classic this September with Rodgers & Hammerstein’s “South Pacific in Concert.”

Set to take the stage on back-to-back Saturdays, September 12 and 19, the production is David Ives’ concert adaptation of the Pulitzer Prize winning novel “Tales from the South Pacific” by James A. Michener.

Featuring the works of renowned musical theater tandem of Richard Rodgers and Oscar Hammerstein II, the concert offers all the original music that helps tell a story of love mired with issues of prejudice and race all set on a paradise island in the South Pacific during World War II.

The outstanding leads are joined by 20 of the country’s finest musical talents including Michael Williams, Red Concepcion, Hans Eckstein, and Raymond Concepcion among others accompanied by the music of the Manila Philharmonic Orchestra under the baton of Maestro Rodel Colmenar and helmed by veteran stage performer and director Menchu Lauchengco-Yulo.

The show marks the first time that a concert adaptation of a major musical will be done in the Philippines. Combining the state-of-the-art technical features of the NPAT with the cast’s impressive musical talents, the production offers a new approach to watching stage musicals. 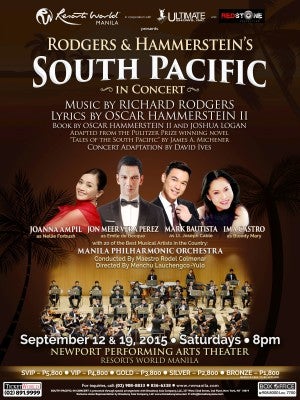 Tickets are now available at all TicketWorld outlets and at the RWM Box Office. Visit www.rwmanila.com or call (632) 908-8833 for more details.
RWM is the first one-stop, non-stop entertainment and leisure destination in the Philippines that features recreational thrills, world-class performances, unique events, and exciting lifestyle options.

Also home to RWM is The Newport Mall which features international luxury brands, state-of-the-art movie theaters the Newport Cinemas, an award-winning, ultra-modern Newport Performing Arts Theater (NPAT), and a cozy, 24/7 entertainment hub at Bar 360. Dine in one of almost 50 restaurant outlets offering a diverse selection of local and world cuisine, prepared by top Filipino and foreign chefs and paired with a wide selection of the finest wines and popular liquors.