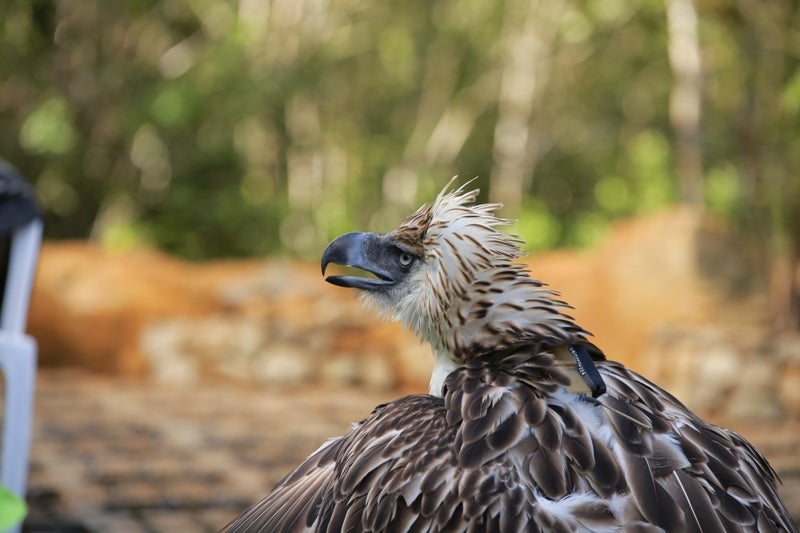 ‘PAMANA’ before she was released back into the wilds last June 12.

THE KILLING of the Philippine Eagle named Pamana inside the Mount Hamiguitan Range Wildlife Sanctuary in Davao Oriental province now threatens the status of the mountain as a World Heritage Site of the United Nations Educational, Scientific and Cultural Organization (Unesco), heritage and environment conservation experts say.

Mount Hamiguitan was inducted into the World Heritage List last year during the Unesco convention in Doha, Qatar. It was qualified for listing under Criterion X.

“Since a highly endangered species was killed, the management of the park failed [to protect the listed site’s biodiversity]… as well as its ecosystem integrity,” says a conservation expert, who requests not to be identified.

Criterion X means the site “contain(s) the most important and significant natural habitats for in-situ conservation of biological diversity, including those containing threatened species of outstanding universal value from the point of view of science or conservation.” The Philippine Eagle (Pithecopaga jefferyi) is endemic to the country and critically endangered. It is one of the largest and rarest eagles in the world. It can be found only in Luzon, Samar, Leyte and Mindanao. It was first discovered on Samar Island in 1896 by British naturalist John Whitehead. For years it was erroneously referred to as the monkey-eating eagle.

“Pamana” was the name given to the eaglet rescued in 2012 in Iligan City, Lanao del Norte. It had two gunshot wounds when it was found.

For three years, the female eagle was nurtured back to health at the Philippine Eagle Center in Davao City. It was eventually released back into the wilds last June 12, Philippine Independence Day.

But the eagle was found dead on Aug. 11 not far from its release site in San Isidro town, Davao Oriental, with a gunshot wound on the right chest.

A number of experts agree that education is key for the survival of the Philippine Eagle and for the Pamana incident not to happen again.

“For me,” says an expert, “first is education at all levels from the youngest up to the politicians.”

“Awareness is part of prevention. The research and foundation center can’t do it alone,” says Delan Robillos of the Subcommission on Cultural Heritage of the National Commission for Culture and the Arts (NCCA).

“This is not only a Mindanao issue. Churches, schools, the private sector, LGUs, down to the barangay, media, everybody should be involved. This is a discourse for everyone. It concerns all generations,” he says.

There’s also a need for a livelihood system to be set up for the people in the park, the experts add.

“There’s a need for regular monitoring of parks through capacity building and last enforcement of protective laws,” says Eric Zerrudo of the Unesco National Commission of the Philippines (Unacom).

Extensive education of the public should be national in scope and must be continuing.

Fr. Harold Rentoria, OSA, NCCA commissioner and head of its Subcommision on Cultural Heritage, says he was saddened when Pamana was killed. “The act shows that there are still people who have not recognized and valued one of our national treasures, the Philippine Eagle,” the Augustinian priest says.

“We will intensify our education program on the protection of our heritage, cultural as well as natural, so that this incident will not happen anymore.”

Wildlife veterinarian and Unacom resource person for natural heritage Teri Aquino says “Pamana’s death is a “serious call for stepping up on enforcement efforts as well as awareness raising.”

In an official statement released by Dolores Valdesco of the Davao Oriental Provincial Natural Heritage Office, the provincial government says it was “very shocked” upon learning the incident.

The provincial spokesperson adds that Gov. Corazon Malanyaon has ordered an investigation and offers P50,000 reward for the identification of the culprit.

The province also hopes the incident will not affect the World Heritage status of Mount Hamiguitan.

“We hope that the International Union for Conservation of Nature, which is the technical arm of the Unesco on natural properties, would not be quick in condemning us on that single incident of the case of Pamana,” the statement says.

“By the continued long presence of very rich biodiversity of Mount Hamiguitan Range, we have already proven to the world our capability to protect rare, endemic and endangered species as cited in our nomination dossier and in our Statement of Outstanding Universal Value.

“Thus, it would be unfair to judge us as incapable of protecting important wildlife species for just that one isolated case.”

The statement says the provincial government is going to strengthen its education campaign, community building, and networking for the protection and conservation of the Philippine Eagle.

“We still have so much more wildlife, biodiversity and landscape to protect and conserve since Davao Oriental is a part of the Eastern Mindanao Biodiversity Corridor,” says Valdezco. “We have to move on and continue our determination and efforts for ecological and natural resource protection and conservation.”

Mount Hamiguitan is the first mountain range and the third natural site in the Philippines to be inscribed on the World Heritage List.

Batanes Protected Landscapes and Seascapes are listed for the Mixed (Natural, Cultural) category.

The Philippines, Unacom officers say, will apply for the inscription of the sites once its four-year term at the World Heritage Committee ends in 2017.