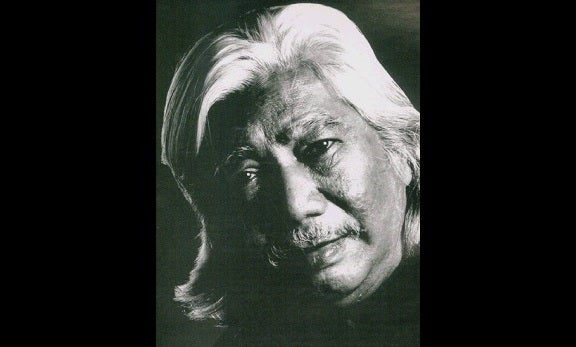 ROMULO Olazo, who passed away on Aug. 18 at age 81, was one of the most dominant abstractionists of the second generation of Filipino modern artists—and probably the one with the most longevity and staying power.

Long nominated for the National Artist Award, Olazo was both a painter and a printmaker, mastering the gamut of print forms, from woodcut to etching, serigraph, silkscreen and collograph, and expertly combining both painting and printmaking in his major series, “Diaphanous” and “Permutation.”

In 1981, Olazo was selected by distinguished critics—Leo Benesa, Rod. Paras-Perez and Emmanuel Torres—as one of “Five Outstanding Living Artists.” The others were (National Artists) Cesar Legaspi, Ang Kiukok, Arturo Luz and Napoleon Abueva.

Late in life, Olazo threatened to invade sculpture as well, making iron and steel maquette studies of his two most famous abstract series, preparatory to their execution as monuments or sculptural works.

So familiar and ubiquitous are the “Diaphanous” and “Permutation” series that they have threatened to displace from the public imagination the proto-typical abstract images (prototypical to Filipino viewers) of the more senior abstractionists: National Artists H.R. Ocampo and José Joya, and, of course, Fernando Zóbel.

His labors both imaginative and physical belied Olazo’s physiological decline that came with age and all its attendant vicissitudes.

In the early 2000s, Olazo had a heart bypass and, later, started to wear a heart pacemaker.

But even with a pacemaker, he embarked on the monumental “Diaphanous” series of large-scale abstract works that combined painting and print (specifically silkscreen) techniques, depicting irregular but still highly geometric forms layering one another.

The layers are shown in very soft and sensitive lines and colors that, when combined, become a symphony of silhouettes and nuances, seeming to throb like musical resonance, and providing a feeling of therapy and calm to the viewer.

Not surprisingly, the series has been a big hit among collectors and art lovers, and should now be nearly priceless.

Olazo was born on July 21, 1934, in Batangas. His father died even before he turned 5 and his mother was left to provide for the family.

Olazo later moved to Manila to work. In 1959, he enrolled at University of Santo Tomas, the cradle of Modernism in the Philippines, where his teachers included National Artist Victorio Edades and Diosdado Lorenzo.

He joined the advertising world after UST, but he continued to paint and do prints, and participated in several shows.

In 1972, Olazo was included in the first batch of the Thirteen Artists Awards of the Cultural

Center of the Philippines, which drew its inspiration from the list of the Thirteen Moderns, or pioneering Philippine modern artists, which had been drawn decades before by his teacher Edades, and which originally included other teachers at UST as well, such as Lorenzo, Vicente Manansala and Galo Ocampo.

Olazo was the Philippine representative to the XII Biennial in Sao Paolo, Brazil, in 1973, in which he exhibited his “Diaphanous” series in collography; and to the 11th Biennial of Prints in Tokyo, where he won an honorable mention for his “Permutation” series.

Although his Tokyo biennial print contribution had introduced “Permutation” as acetate pages, it was in the late 1980s that he started doing the series in acrylic.

Unlike “Diaphanous,” which is in oil and an experiment in transparent layering, “Permutation” explores lines and forms through linear overlapping. Most of the forms are in black and white and gray lines, some opaque.

Critic Cid Reyes connects the child Olazo’s fascination with waterfalls and their cascading propulsion and the misty energy they create upon contact with rock and flora to the adult Olazo’s development of his “Diaphanous” series:

“Could these cascading slabs of aqueous force, inflected by pure light, have created the subliminal emergence of the ‘Diaphanous’? From this synoptic vantage point, can the viewer surmise that the waterfall was a healing agent that caused the ‘Diaphanous’ into existence.”

At home in both representational and nonrepresentational art, Olazo’s imagination was buoyant, vital and energetic, belying his old age. Even when he went around with a cane, he was still hard at work on his huge paintings of beautiful forms and therapeutic gossamer colors.

Olazo married Patricia Tria in 1966. They have three children, one of whom, Jonathan, won the CCP Thirteen Artists Award some 20 years after his dad got it.

One of today’s more exciting contemporary artists, Jonathan curates the annual ManilArt, the oldest and biggest art fair in the Philippines.