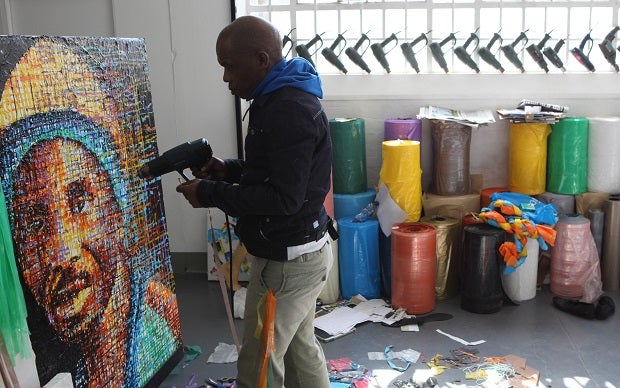 The plastic bubbles pop under Buthelezi’s fingertips, calloused from manipulating the hot, molten material he uses to create large abstract pieces and portraits.

In one work, purple and orange soft drink labels become the clothes worn by women chatting on a street corner. The plastic’s rough texture evokes the grit of life in South Africa’s townships.

“I’m influenced by people. Wherever I look or whatever I do, it’s always being tempered by a human being,” said Buthelezi.

A vivid series of black and white portraits of children playing is especially poignant for Buthelezi, who at 11 broke his back trying to lift a bag of cement as he helped his father make bricks.

“I never had a chance to play,” he remembers. Buthelezi isn’t angry; instead he appreciates the lesson of hard work and independence.

The 49-year-old artist began working with plastic in his final year of art school while looking for a distinctive medium that a poor student could afford. He found inspiration in a heap of plastic and a heat gun forgotten in the school’s shed, beginning a career in found art that has lasted 23 years.

Buthelezi’s use of throwaway objects to depict often forgotten about people sets him apart as an artist, says art critic Karabo Kgoleng Dada, who counts Buthelezi as one of a growing number of South African artists whose work reflects an awareness of humanity’s often detrimental impact on the environment.

Kgoleng Dada says it remains to be seen in what new directions Buthelezi can take his art: “Has he kind of painted himself into a corner using this medium? How far will he take it? That’s something we also have to wait to watch.”