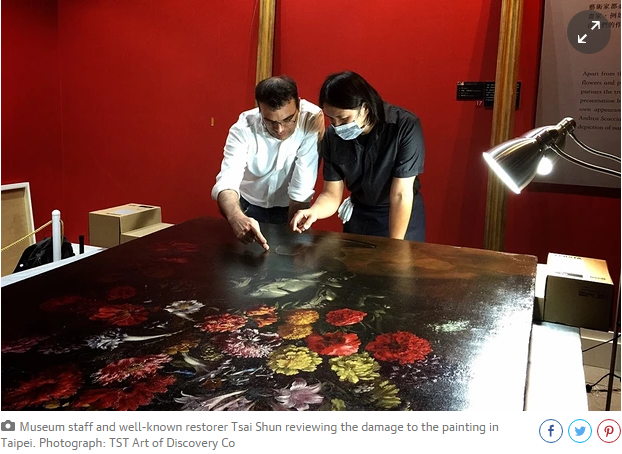 Screen grab from The Guardian

Boy tears through $1.5-M painting after tripping in museum

A 12-year-old Taiwanese boy punched a hole through a 17th century oil on canvas valued at $1.5 million after tripping at a museum over the weekend.

A report by The Guardian said closed-circuit television camera footage released by organizers of “Face of Leonardo: Images of a Genius” in Taipei showed the boy “catching his foot and stumbling over” the 350-year-old painting by Italian master Paolo Porpora.

“He looks up at the Paolo Porpora oil on canvas painting of flowers, shown later to have a fist-sized gash at the bottom, and freezes, looking around at other people in the room,” the report said.

Citing the statement of organizer Sun Chi-hsuan, Focus Taiwan news reported that the boy’s family would not be charged for restoration costs as the painting was insured.

The 200-centimeter tall damaged work, which depicted a vase of flowers, was one of 55 paintings “gathered from the finest art collectors in the world” featured in the exhibit.

Porpora is known for his baroque-style paintings of flowers and fruits. YG/RC