In KidZania, your kid can be a doctor, a firefighter–even an Inquirer reporter | Inquirer Lifestyle 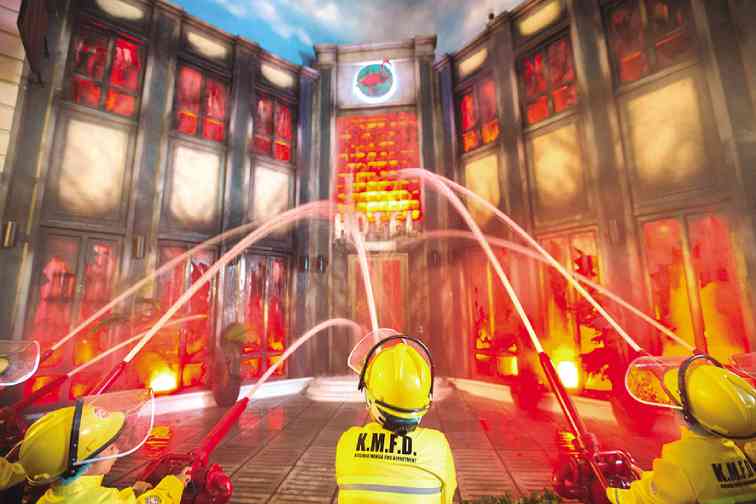 In KidZania, your kid can be a doctor, a firefighter–even an Inquirer reporter

Remember pretending to be a chef, pilot, cop or doctor as a kid, gathering props at home and using a box as a plane or a fort? How about diagnosing dolls with fever and giving them professional care? We’ve all been there.

Now, kids can take a break from their tablets and playing Minecraft, because there’s an actual place for them to immerse in real-world jobs.

KidZania Manila, a kid-sized city designed to expose children to different industries, has opened its doors to kids four to 14 years old. (Strictly for kids only, not kids at heart.)

There are over 100 roles to try in 40 real-world establishments. Upon entry in KidZania airport, kids are given 50 KidZos (that’s their currency). Inside the city are establishments where they can earn or spend their money, just like a real economy.

The crowd favorite is the Fire Department, where kids undergo a fire simulation. It’s a 20-minute activity which includes a briefing about fire fighting.

Kids get a lecture on fire safety and watch a video of what to do and not to do in case of fire. They’re also taught how to use the fire extinguisher, and other methods on how to put out fire. Kids even get to suit up in yellow fire-fighting gear and ride a mini fire truck en route to the burning Flamingo Hotel.

The rescue has complete backup, with kiddie paramedics trained in St. Luke’s Hospital to respond to emergencies.

There’s also a baby-care section in the hospital where aspiring nurses get their hands on taking care of newborns. Kids learn how to give babies a bath, change diapers and even learn about a few things such as the umbilical cord, a premature baby and the purpose of an incubator.

“I really liked that there are many jobs, and even at my age you actually know which to pick from all the jobs,” Anya, 14, said. “I have five hobbies so there are many choices for me, but I want to become an animator.”

Another popular activity with the kids is the Cebu Pacific flight simulation and cabin crew training. Kids have a choice between the two activities inside the mini aircraft. In the flight simulation, kids can choose if they want to take the plane for takeoff, fly through stormy weather or land the plane. There are many control buttons, but only the navigation lever works. Kids are free to improvise what the other buttons are for.

We took over the copilot seat and tried to fly the plane. Let’s just say we’re glad it was just a simulation and there were no actual casualties!

There’s also a DZMM radio station where we met Iggy Beltran, 9, who was eager for his shot at being a radio jockey.

We sat down with Iggy during the broadcast briefing. When asked what a radio jockey does, Iggy said: “He does the news, he tells the people if there’s a storm.”

In the radio station, kids reenact an episode in the show “Dear Urbano.” After the broadcast, the kids earn 10 KidZos.

Like in any city, there are cops designated to enforce the law. The KidZania Police Department (KZPD) trains the young detectives to respond to emergencies and even solve crimes!

Kids get to unleash their inner Sherlock Holmes and roam around the city looking for clues on different cases. One of the cases the sleuths get to work on is the missing car in the Honda dealership. They get access to the logbook of mechanics and find a suspect. Coincidentally, there’s a bank robbery case in Bank of the Philippine Islands. The kids find out that the two cases are linked since the suspect used the stolen car in Honda as a getaway vehicle.

Karlo Fabi, 9, who gave KidZania a thumbs-up with a very cute grin, said his favorite role-playing activity in the city is “the investigation.”

Bing, Karlo’s mom, said KidZania is a place they will surely visit again.

“I think the impact is more on me. Nakita ko personality ng kids ko, yung isa gastos ng gastos, itong isa matipid. My daughter is only two years old so ’di ko alam na magastos s’ya. The kids were also able to interact with other kids.”

A crime is always a good news story—and KidZania also has an Inquirer! Kids get to go on the field, go on different beats and follow stories like the missing car case of KZPD. At the end of the legwork, the young reporters get to publish their articles on the front page. They even get to choose the banner photo, from photos available in the archives to their own selfies.

For kids seeking higher education to become professionals and earn more, there’s also a university in KidZania. The Centro Escolar University establishment offers a 30-minute course of a subject of choice. Kids have to pay only 10 KidZos for tuition.

From humanities and the arts to urban farming, KidZania has a lot to offer kids. There’s a Star Magic acting academy and Star Music for kids who want to pursue the arts, Pascual Lab, Mercury Drug for future pharmacists, Holiday Inn and Suites, even a veterinary clinic, a car dealership and a driving school where they get to earn their licenses.

There’s also a Toy Kingdom nursery for infants and a parents’ lounge.

The are still more establishments to open in the city, such as Milo sports clinic for sports and recreation, Art and Design Academy and the KidZania museum.