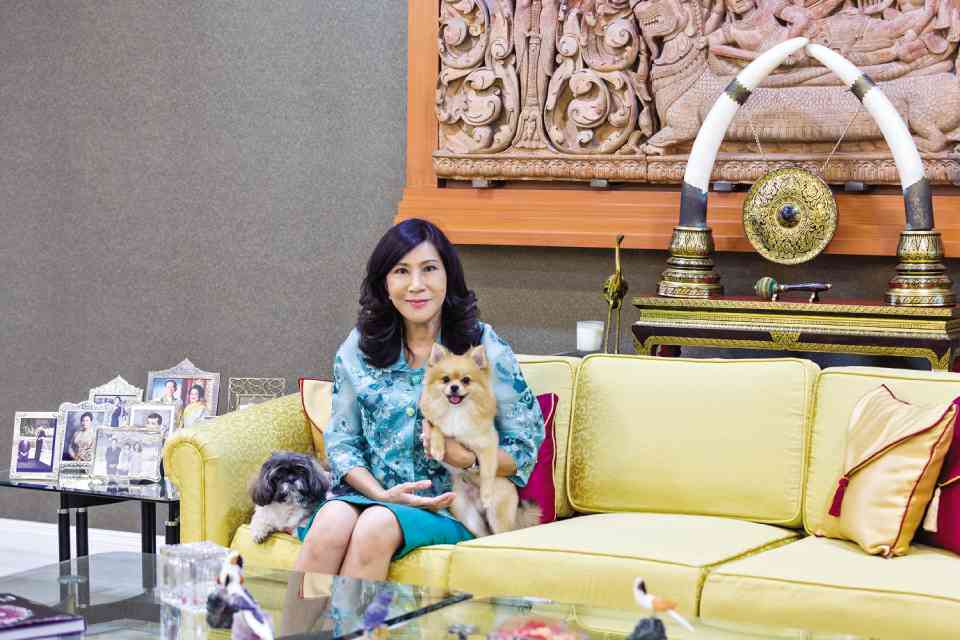 Thai envoy’s spouse knows how to spice up diplomacy–literally

Asked his recommendation for the best Thai food in the Philippines, the new Thai ambassador, Thanatip Upatising, declares, “My wife’s cooking!”

“His work and dedication inspire me,” rejoins Madame Monthip Upatising—or Bee to friends.

Madame Upatising is an ambassador in her own capacity. While the Thai ambassador strives to strengthen political and business ties between Thailand and the Philippines, she considers it her mission to promote the culture of Thailand through her culinary skills and hospitality.

Since their arrival last March, the Upatisings have showcased Thai cuisine in various official receptions and banquets. Nowadays they’re even holding cooking demonstrations.

Madame Bee held her first Thai cooking class in Manila last Aug. 17. Common ingredients such as fish sauce, coconut milk and chili paste, she said, are available in the markets.

“Thai cooking demonstrations are also in line with our government’s policy to promote Thai food and food security, with Thailand as Kitchen of the World,” she says.

Born an only child, she was given the name Monthip, which literally means “Angel’s charm.”   In the hospital, the doctor who delivered her called her “Baby,” which was later abbreviated to “Bee,” her nickname.

After studying in a private Catholic school in Bangkok, she was sent to boarding school in England, where she later went on to Winchester College.

Returning to Bangkok, she was employed at the United Nations Economic and Social Commission for Asia and the Pacific (Escap) as a conference officer.

In one UN conference, she met Ambassador Thanatip Upatising, then a mid rank level officer at the Thai Ministry of Foreign Affairs. On their first meeting, he introduced himself as an Indonesian envoy and spoke to her in English—a 6 ft-tall diplomat with dusky skin and suave appeal. She found his introduction very convincing.

Thanatip called her after the conference and said he had extended his stay in Thailand. He kept inviting her to lunch until she finally agreed. He was shocked when, on their first date, eight of her friends tagged along.

One day at an Escap reception, her boss introduced her to Thanatip, identifying him as a representative of Thailand’s Ministry of Foreign Affairs. Thanatip’s prank was one of the many ways he showed his sense of humor.

“He is outstanding in many ways. He is clever, a good leader and also has a good heart,” says Madame Bee.

They have been married for almost 20 years, enjoying their home with two dogs—Kuichai, a one-year-old Pomeranian from Princess Chulabhorn, King Bhumibol’s youngest daughter and McQueen, a 10-year-old Shih Tzu given by Princess Siriwanwaree Nareerat, daughter of Crown Prince Maha Vajiralongkorn.

Madame Bee continued working at Escap after her marriage, while Thanatip was posted first in Vancouver as deputy consul general and later as ambassador to Indonesia.

It was not until her husband’s second ambassadorial posting in Japan in 2012 that Madame Bee left Escap.

It turned out that cooking was a popular activity among diplomatic spouses based in Japan. Madame Bee, who acquired her cooking skills from her mother, organized cooking sessions in their residence in Tokyo.

“The cooking sessions were popular and well attended by spouses of foreign ambassadors to Japan,” she says. ” It was a venue for us to mingle, to learn about other cultures and to gain better understanding about our friends from different countries.”

Now in the Philippines, Madame Bee continues with her culinary diplomacy, using the famous Thai cuisine to strengthen bonds between Thailand and the Philippines as well as the other diplomatic missions accredited to this country.

When Thai Prime Minister Prayut Chan-o-cha arrives in Manila tomorrow, Aug. 27, the Thai residence will host a reception, which will offer a medley of Thai, Filipino and continental food. Madame Bee plans to introduce Filipino cuisine—chicharon as one of the appetizers, adobo, pancit Malabon, lechon and halo-halo. The menu will include oriental roast pigeon and beef dishes.

On Thai cuisine, she explains that it is a tantalizing balance of opposing flavors.

“Thai cuisine is distinct from others. Its taste, smell and texture are made unique by the use of local herbs which can be found in the Philippines, such as lemongrass, tamarind, chillies, garlic, mint and basil. These spices not only lift the taste and smell of the Thai dishes, but also make our cuisine exotic and healthy. These spices have been used for hundreds of years as our traditional and herbal medicine. For example, the red shallot in the pad thai (stir-fried noodles) can be used for colds and flu. Lime and lemon in tom yum goong (hot spicy prawn soup) can also heal a sore throat.”

In the kitchen during the cooking demonstration, she does a wonderful job mixing, by instinct, sweet, sour, salty, spicy, hot, cold, delicate and heavy flavors. “We don’t use measuring cups and spoons. We add ingredients, then taste and add some more until we get the flavor we like.”

When organizing a function in the residence, Madame Bee herself buys fresh flowers and arranges them, sets the table centerpiece and creates the menu. A typical menu will include crispy spring rolls with pork, vermicelli, carrots and bell peppers with homemade plum sauce; a robust salad of minced chicken with lime juice and chili or fish pancake; tom yum goong with large prawns in a pleasurably spicy lemongrass broth flavored with Kaffir lime leaves; an aromatic curry casserole; and a fish dish with cashew nuts. The meal is finished with sticky rice and mangoes or rich coconut pudding.

The pad thai is rarely served at dinner. As luncheon fare, the classic recipe is made with juicy prawns, eggs, chive, banana blossom and garnished with bean sprouts and fish sauce-tamarind flavoring. Madame Bee’s meals end with giveaways—mostly food products with the Thai Select logo to certify their quality and authenticity.

Ultimately, when words are not enough, food becomes a medium for influence and expression.