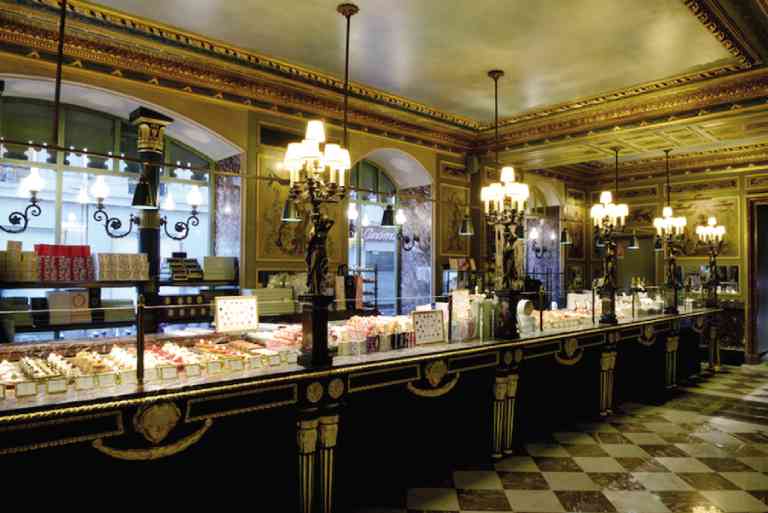 THE LADURÉE shop in Paris’ Champs-Élysées PHOTO COURTESY OF LADURÉE

Ladurée, home of the original French macaron, opens in Manila

Mark “Jappy” Gonzalez has a rather selfish reason for wanting to bring Ladurée, the Parisian patisserie institution, to Manila—one that lovers of its legendary macaron will be thanking him for when the Ladurée boutique finally opens its doors this weekend in Makati.

“When I want one, I can just have one,” he says with a chuckle. “I don’t have to buy in bulk [in Paris] because I’m going home.”

Gonzalez, managing director of H&F Retail Concepts Inc., which is bringing the brand to the country, will unveil Ladurée’s first retail boutique this Saturday, Aug. 29, at the new 8 Rockwell building on Hidalgo Drive.

The boutique will carry Ladurée’s enticing collection of variflavored macaron, delicatessen items, confectionery, ice cream cups, and an array of perfumed candles and home fragrances, in their signature collectible boxes and shopping bags.

Ladurée is, of course, the patisserie that created the first-ever macaron in the mid-20th century, a confection made of almonds, sugar and egg whites—luscious ganache sandwiched between two crisp shells. It has been copied by pastry chefs all over the world, but purists, like Gonzalez, still swear by the original.

“It doesn’t crack as easily” and keeps its integrity even when you hand-carry it on your trip, he says. And “it’s in the same state even seven days after purchase.”

While there are now other popular French macaron brands, their shells just don’t hold up in transit; almost always they’re a crumbled mess by the time you reach your destination.

Even in Manila, there are many places now offering macaron. The difference will likely be underscored by the price alone: Each delicate pastry from the luxury French brand will retail for about P150, about as much as its Hong Kong price or three times what Filipinos are used to paying in local pastry shops.

Ladurée will fly in all macaron to Manila, made from its lone production source in France, such that the quality is the same whether you buy it in Paris, Tokyo, New York or Dubai.

“They fly everything all over the world, so the consistency is the same,” Gonzalez says. “The only way it could change is if shipping protocols aren’t followed.”

Next year, H&F will open the Ladurée salon de thé (tea salon) in another Makati location, similar to its first outpost in Paris’ rue Royale, where the brand started in 1862, and the touristy tearoom and restaurant in Champs-Élysées.

“That’s when things will get to be made here,” says Gonzalez. “The French pastry chef will be coming here for a month to source what’s available here seasonally and to come out with the final patisserie lineup. There are things you can’t make here because of the humidity. No matter if you have a cold or dry room, the moment it hits the floor it gets exposed to humidity, it’s just not the same, so he’ll be here to do that research.”

Known for high-fashion retail, this is H&F’s first foray into food and beverage. In the same building, the company is also opening three boutiques: the first shop of Lanvin, the Balenciaga flagship and the Makati outpost of homme et femme.

“It’s not so much as going into F&B,” says Gonzalez. “We see it as a product, just like a pair of shoes or a dress. We’ve become a lifestyle brand with the introduction of our home area, which is at the center here [in Univers]. You decorate your homes with stuff you buy from us, your house smells like the scents from our store, you put it on your skin… Logically we’re just trying to make it into a whole person. Now you can have some cake.”

Like its 8 Rockwell fashion stores, the Ladurée opening has been postponed several times owing to construction delays “as it’s a highly technical store,” says Gonzalez, which required some details to be outsourced overseas. (At press time, construction was in its final stages.)

This week, the Ladurée CEO, Stéphane Jitaux, will be present to oversee the opening. David Holder, Ladurée chair and vice chair of the Holder Group, which owns the brand, will also be in Manila next week for a quick visit.

Holder is credited for growing the Ladurée brand since the Holder Group acquired it in 1993. It was under his direction that the brand began expanding overseas, when it opened its first shop in London in 2005. It’s now found in key cities across Europe, the United States, Middle East and Asia.

Convincing the company to come to the Philippines was quick and smooth, says Gonzalez. When he met with Holder in January, “he didn’t talk numbers, he talked about life, things like that. If he didn’t feel that there was a connection, that you didn’t share the same philosophy, it would not have moved forward.”

Luckily for Filipinos with a weakness for this luxurious French treat, the negotiations were short and sweet.