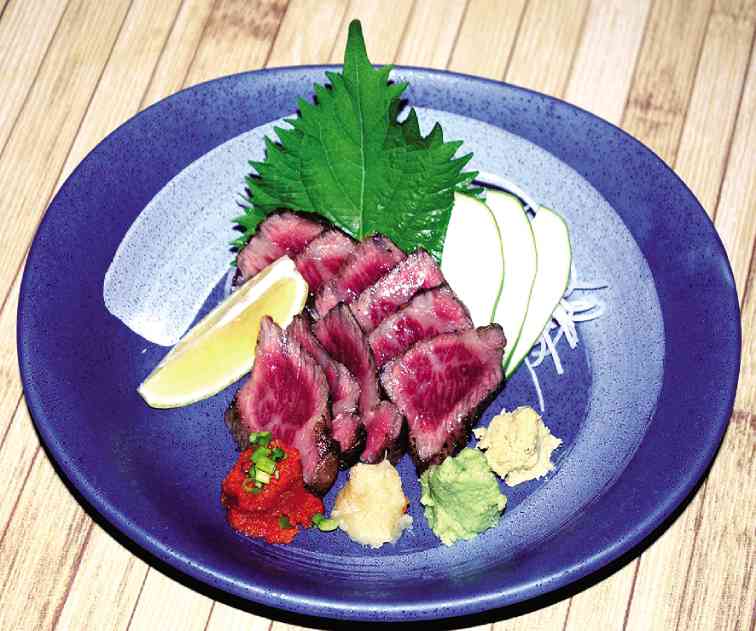 FOR THE Japanese, not all beef is the same. Their domestic market values Matsusaka beef because it is the top of its kind, and very rarely is any made available outside of Japan.

“The Japanese are very particular about many aspects of daily life, one of which is their food,” Veejay Villavicencio of Ogetsu Hime at SM Aura said in an exclusive interview. “In the food halls of Tokyo’s big department stores, perfect fruits, vegetables and pastries are on display and for sale.”

The same or even more importance is placed on their wagyu (Nihonggo for “beef”), which comes from specific breeds of Japanese cattle, namely, Japanese Black, Japanese Brown, Japanese Polled and Japanese Shorthorn.

The Top 3 types of Japanese beef are Ohmi, Kobe and Matsusaka, and Matsusaka is known as the “Queen of Dignity.”

Each beef type is graded but, basically, the more even the marbling and the whiter the fat, the higher the grade.

“We are perhaps the biggest importers of Matsusaka beef in the country today, which is why we were able to convince our Japanese purveyors to provide us with weekly deliveries,” Villavicencio said.

His father, Vicvic, is the man behind the buffet restaurant chains Dads and Sambokojin. Over 40 years ago, he opened the first Kamayan that helped elevate Filipino cuisine from home-cooked or carinderia-style food to top-of-the-line restaurant fare. Kamayan was, in fact, an early bid of the Filipino to make his cuisine world-class. Kamayan became the favorite dining place of the upper and middle echelons.

At Ogetsu Hime which opened almost two years ago, the younger Villavicencio began offering A4-quality Matsusaka with high-grade sushi using fish and seafood from Japan. It was only several months ago that they were able to get their hands on A5-quality Matsusaka.

“That’s the highest grade available, and we’re probably the only ones that offer it locally,” he said. “We even have the certifications to prove that.”

Apparently, approximately 25,000 of these cows are slaughtered yearly.

Matsusaka beef originates from the Matsusaka region of Mie Prefecture. These female virgin heifers are fed a mash consisting of ground wheat, barley and soy pulp, with a few sips of beer should their appetites drop.

When they are slaughtered at three years old—not like most cattle worldwide that only reach 18 months—each black cow can sell for as much as $300,000.

You would be correct in assuming that Matsusaka beef is the most expensive beef but, at Ogetsu Hime, they sell a number of dishes at half the original price. These include Ishikayi (cooked on a hot stone), Seiro (steamed over vegetables), Robatayaki (with a teriyaki sauce glaze), Teppanyaki (cooked on a flat iron grill), Sukiyaki (in a soup with vegetables and noodles) and as sushi (from the restaurant’s sushi bar).

Net prices for A5 Matsusaka range from P765 for sashimi to P2,550 for either Teppanyaki or Sukiyaki.

“We actually don’t earn very much from the sale of Matsusaka beef, but we want to give our customers options,” Villavicencio said. “When we got A5-grade Matsusaka, the floodgates opened. Our suppliers began offering other delicacies not accessible to local restaurants.”

“They say it’s the best way to enjoy the beef but, instead of seasoning it with salt and pepper, we use a blend of spices we bring in from Japan. It’s already premixed and gives the dish something extra,” he said.

Not that A5 Matsusaka beef needs any extras—amply sliced and quickly grilled, its rich flavor and almost buttery taste are unlike any other.