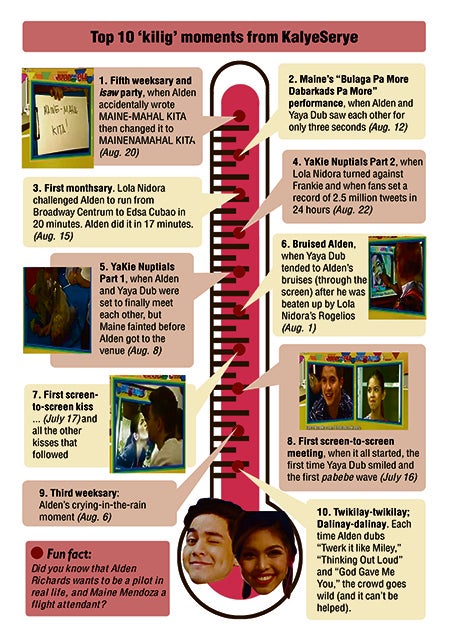 Why I’m hooked on #AlDub 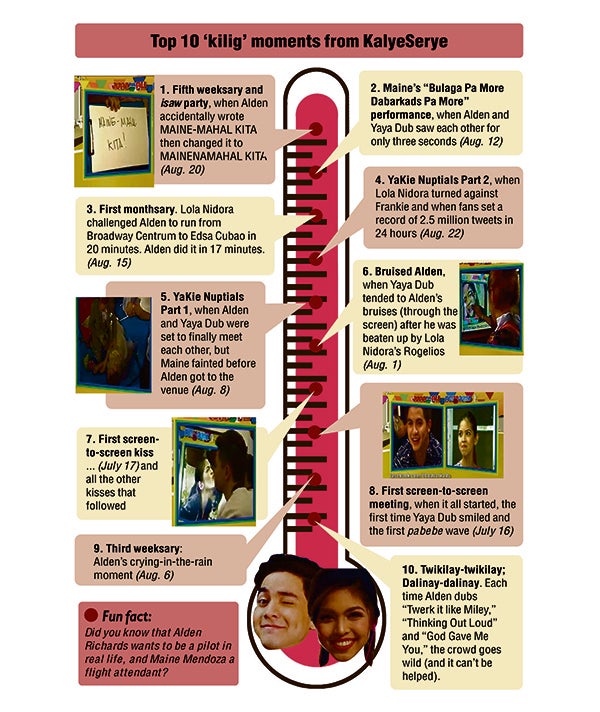 Do you remember your childhood sweetheart, your high school almost-boyfriend or your early version of romantic love? Have you had the kind of infatuation that makes your heart pound almost out of your body, or turns your tummy into a butterfly haven? The kind of feeling that makes you smile no matter how hard you try not to? That’s the way I feel whenever I see AlDub on screen—only better.

From Alden Richards’ totoy days on “Tween Hearts” until he matured into a young heartthrob on “Carmela,” I’ve been an avid fan. I often tell my mom about his smile because his dimple is the best one I’ve ever seen (it might be an exaggeration, but you get my point).

There was a time when you would see him on TV from Monday to Sunday—“Ilustrado” on primetime, “Bet ng Bayan” and “Sunday All Stars.”

One April afternoon, we were surprised to see Alden Richards co-hosting the “Pinoy Henyo High” segment of “Eat Bulaga!” I remember telling my mom that I can never skip an “Eat Bulaga!” episode anymore with Alden there (again, an exaggeration, but you know).

On the other hand, I had only seen a Dubsmash video or two of Maine Mendoza online.

“Eat Bulaga!” launched Maine as “Yaya Divina Ursula Bukbukova Smash” or simply “Yaya Dub,” who assists the new character of Wally Bayola, “Lola Nidora,” in their “Juan for All, All for Juan” and “Problem Solving” segments.

Her first appearance created a buzz online because people recognized her from her Kris Aquino Dubsmash videos.

I appreciated them separately then. Then the “That’s My Bae” segment was launched. Alden would show off his dimple and I would go loco over it, sometimes doing somersaults at home. Yaya Dub would make me laugh all my worries away because of her face, which showed everything but a smile.

I would crack up each time José Manalo would fail to make her laugh. The best José could get was a poker face, if not a scowl.

I love how Maine is not afraid to grimace and distort her face. She’s pretty all the same.

Just when I thought “Eat Bulaga!” was making me very happy, the unthinkable happened: Yaya Dub finally smiled—but only after seeing Alden Richards on the monitor. According to other articles about AlDub, it was a small trick they tried to make Maine smile.

They did not expect viewers to be lovestruck. I didn’t expect it, too. I felt like I was 16 again—hashtag kilig. I wasn’t the only one. Day after day, with their pabebe waves and volley of dubsmashes, the people get hooked on them “pa-more ng pa-more” and, yes, the fever did not spare me.

Almost every day, when I realize how crazy I look, or how “cheap” others might see me for being hooked on AlDub, I ask myself why I can’t get enough of this new love team. I now know the answer. The rawness of their actions makes the love team seem so real it’s almost surreal. They remind me of my childhood sweetheart, a distant memory of an early version of romantic love, and every feeling I got back then.

AlDub reminds me of my own story, not because their story and mine are alike, but because they are what I dreamed of. And the fact that Maine and Alden have not yet met in person makes me think of my own love life. Every day, I ask God to guide my not-yet-found partner and keep him safe until I meet him.

I kind of see myself in AlDub. They know the other is right there, just on the other side of the screen, but it is not yet “tamang panahon” to see each other.

Also, as I enter adulthood, I find it refreshing that I feel this way again. I have not felt like this in ages.

I am very thankful for the AlDub fever. It made our family happier. And from what I’ve seen on Facebook, we’re not the only ones. I’ve reconnected with friends online. We talk about how kilig we get from the day’s episode.

Fans like me also feel that we matter. Our efforts are appreciated. Dabarkads like Joey de Leon, Allan K., Ruby Rodriguez, and even Alden and Maine always interact with us, tweeting us like we’re close friends. We get to make suggestions on how the story would go. Last weekend, fans edited old photos and added Lola Nidora to historical pictures, suggesting that she was really wooed by Hitler as she said. KalyeSerye’s Monday episode included the photos edited by the fans.

I could go on forever but we don’t have eternity so let me use two words I swiped from Joey de Leon: “dimple” and “simple.” Alden and Maine.