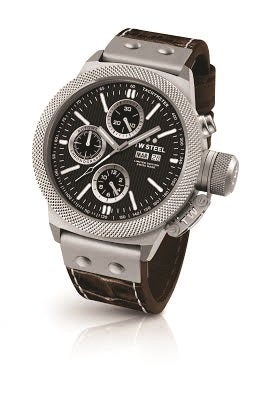 To mark its 10th anniversary, TW Steel pays homage to Canteen, one of four models the Dutch watch brand launched a decade ago, by recently introducing a special limited edition watch known as Apex Canteen.

“Only 200 units of Apex Canteen will be sold all over the world,” said Dutchman Auke Possel, TW Steel’s head of global marketing. “To show how important the Philippine market is to us, we’ve allocated 15 units here.”

Instead of the usual cow-leather strap, it sports a real crocodile-leather strap in dark brown. It has “scratch-proof” sapphire glass and comes in a special 10th anniversary box, which resembles a miniature steel suitcase.

But the anniversary offering isn’t limited to Apex. TW Steel’s Filipino fans can buy any of Canteen’s recently updated and more affordable versions, which come either with leather or stainless steel bracelets (prices range from P16,000 to P30,000 a piece).

When TW Steel debuted in Asia, it chose to open its first boutique in the Philippines. Filipinos have responded well to the brand’s “it’s not a watch, it’s a statement” tagline by reportedly making it “number one overall” in the country.

“We’re now present in 120 countries, but the Philippines remains one of TW Steel’s top markets,” said Possel. “We’re also doing well in the Middle East, specially in the UAE.”

When Possel went to the Middle East to find out why, he learned that a big chunk of TW Steel’s market in Dubai and Abu Dhabi is composed of Filipino expatriates.

Filipinos, he said, aren’t shy when it comes to watches. They know that a TW Steel watch is “something meant to be seen.” Close to 70 percent of its market is composed of men.

“Since the brand is unisex, we’re not trying to tell the ladies what size to wear. Some are quite comfortable wearing our bigger watches,” said Possel.

He credits TW Steel’s success to the fact that its founders—the father-and-son team of Ton and Jordy Cobelens—stayed true to themselves by sticking to what they believed in. As the brand’s creative director, Ton heads TW Steel’s design team.

“When I first attended the annual watch show at Baselworld, people kept asking me why we were still doing big watches,” said Possel, who joined TW Steel four years ago. “They thought it was already passé. I don’t think so, I told them, because we’re still selling well.”

These days, the question has changed: Shouldn’t TW Steel be doing bigger watches?

For being a trailblazer, TW Steel is not only being copied by almost everyone. Copycats are even trying to outdo the original by producing watches with casings as big as 62 mm.

“Instead of worrying about them, we see the development as a compliment,” said Possel. “It means we’re doing something right. But as far as sizes go, 50 mm is as far as we go—for now.”