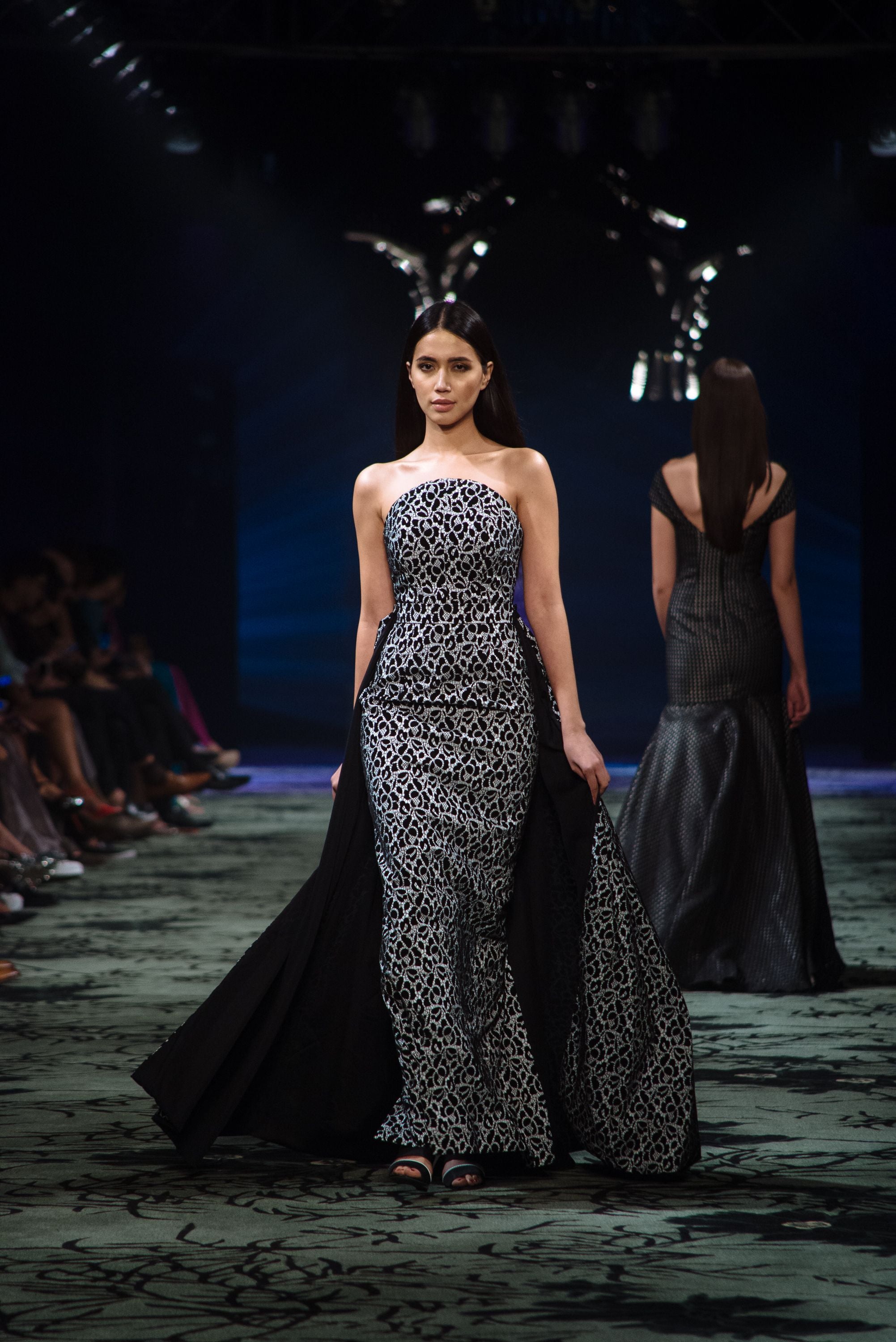 Maureen Disini shows what she’s capable of beyond draping

Her flattering Grecian gowns easily earned Maureen Disini a following when she switched careers a few years ago. So on her first solo show Tuesday night as the featured designer of Inquirer RED’s fashion series, the former fashion editor looked bent on showing her range: that she could do more than skillfully draped gowns.

And indeed, there were tailored pants and jumpsuits; short, lacy dresses; wasp-waist tulle skirts and, naturally, a handful of the draped numbers that she has been known for. She sent out both billowy and skinny skirts. There were forgiving tent shapes, as well as figure-hugging dresses that deftly balanced classy and sexy.

The 41-piece collection was a veritable showcase of the designer’s many sourcing trips abroad, with delicate laces, and sheer patterned fabrics fashioned into dresses, blouses, and overlays of slinky jersey gowns. She stuck to a black-and-white palette, and played instead with textures—some plumes here and heavy beadwork there, or both.

Clearly, Disini is in her element when she does evening wear.

This former stylist’s eye for drama was evident even in the simplest of shapes—narrow dresses that featured short trains or capes—that wouldn’t be out of place on the backs of socialites at the Tatler Ball, or on the cover of Tatler, where she worked as fashion editor for several years. And if it were up to this designer, big bows may just be back in vogue.

She also had thick sashes tied around the waist of at least two jersey numbers, a curious detail, and also a clever one, especially for women self-conscious about their midsection—perhaps the designer’s alternative to her signature draping.

Disini’s strength is in her ability to create elegant, fail-safe clothes, which should explain why she has attracted quite a client base among young professionals and society matrons alike. She’s also a popular bridal designer. With her, there’s no second-guessing; you can count on her to make you look good. She’s not reinventing the proverbial wheel—judging by Tuesday’s collection, not quite yet.

Though an old hand at fashion after stints in major glossies, Disini began designing only in 2011, following her fashion studies in Milan, London and Paris. Mounting a solo gala show after only four years in the business surely came with much pressure. The venue was full house—SRO, to be precise—made up of family, friends, clients, colleagues in the industry, even members of the diplomatic community.

But her relative newness had its advantages. It gave her more latitude to explore her creativity minus the added expectations that usually face an old-timer with a reputation to uphold and achievements to surpass.

The show gave her a venue to prove what she was capable of, and, in the process, delight her loyal clients, entice new ones—and, perhaps, even earn the respect of her peers.