Will you dress up as Caitlyn or Cecil for Halloween? | Inquirer Lifestyle ❮ ❯ 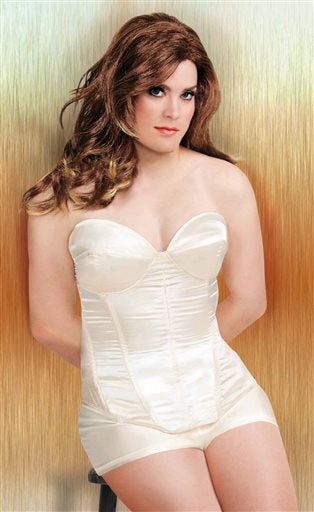 This undated product image released by Spirit Halloween shows a model wearing the Caitlyn Corset set and Caitlyn Wig, inspired by Caitlyn Jenner. The Halloween wars over pop culture costumes heated up early this time around. Petitions and social media outrage are flying over a blood-spattered dentist's smock paired with a Cecil-like lion head, along with a replica of Caitlyn Jenner's joyful lingerie outfit for her coming out on the cover of Vanity Fair. (Spirit Halloween via AP)

Will you dress up as Caitlyn or Cecil for Halloween?

NEW YORY— Who gets to decide what grown people wear for Halloween?

The Halloween wars focused on pop culture costumes have heated up early this year. Petitions and social media outrage are already flying over a blood-spattered dentist’s smock paired with a Cecil-like lion head, along with a replica of Caitlyn Jenner’s cream-colored corset set she wore for her joyful coming out on the cover of Vanity Fair.

But exactly how do the latest examples in the costume clashes for a holiday with a long, bawdy history differ from always off-base behavior like blackface, ala Julianne Hough, or Prince Harry’s turn as a non-Halloween Nazi?

Is the rule of “too soon” at play? Has the digital age spawned an overly politically correct genie with no immediate plans to be stuffed back in the bottle?

Richard Lachmann, a professor at the University at Albany who includes Halloween in his sociology of culture course, said costumes seem to be more provocative every year, with equally amped-up backlash. And there’s always a base of people who feel it’s an “irreligious pagan holiday to begin with and are ready to be upset,” he said.

Throw in a heavy dose of gore, loaded parody and ultra-sexy costumes, Lachmann added, and Halloween is now a free-for-all debate on decency and where the never-OK line belongs. But is there a line at all?

“It seems like there isn’t,” he said. “The point for adults is to be provocative, to do something that breaks the lines of what’s considered acceptable.”

The fashion and lifestyle site Refinery29 is one of many online voices decrying Jenner costumes and accessories, calling out one seller of a “Unisex Miss-ter Olympic Wig” that costs $14.99, in a recent update to a running attempt to take down the gear. Why?

Because as the writer, Liz Black, said in her post: “Every Halloween, there always seems to be a need for articles that explain why you shouldn’t dress up in a costume that mocks another marginalized culture.”

At least four online sellers are hawking Jenner stuff, including one of the largest retailers, Spirit Halloween, but opponents have seen little satisfaction as the companies declare it’s all in fun.

“At Spirit Halloween, we create a wide range of costumes that are often based on celebrities, public figures, heroes and superheroes,” said a statement from Lisa Barr, Spirit’s senior director of marketing and creative. “Caitlyn Jenner is all of the above and our exclusive Caitlyn-inspired costume reflects just that.”

Anytimecostumes.com went with a cartoonish, beefy dude in a brown wig to show off its “Call me Caitlyn Unisex Adult Costume” with a sash declaring just that, lest you not realize who it’s supposed to be. It comes with a bustier and white shorty shorts for $74.99. Is it worth blackface-level anger?

“With blackface there’s a link to the whole history of violence against African-Americans,” he said, echoing Black’s train of thought on what many in the trans community regularly face. “Certainly people can try to convince others that it’s not a good idea to wear a certain costume.”

That’s exactly what animal rights activist Doreen Harley in Indianapolis set out to do in a dustup with Johnathon Weeks, owner in Palm Springs, California, of Costumeish.com. He came up with the “Lion Killer Dentist” costume based on Walter Palmer, the Minnesota dentist who generated a world of wrath when he and his hunting party killed the beloved Cecil in Zimbabwe.

Weeks recently put the costume on sale for $59.99, upping the price to $99.99. Harley took to Facebook and Twitter to protest, and she started an online campaign to have Weeks pull the costume. She now has a promise from Weeks to donate his profits from the dentist’s smock, lion head and bloody surgical gloves to a wildlife organization.

“When I saw the costume, that disturbed me that someone was trying to make a profit off of this incredibly disturbing story,” Harley said.

Does she consider Caitlyn Jenner costumes equally insensitive and disturbing?

“I have friends and family that are gay, transgender, lesbian. It does offend me. It’s almost like mocking someone. It is offensive to that community. I’m more passionate, I guess, toward animal rights. I have to pick and choose my battles and I’m choosing the Cecil the lion battle right now.”

She wouldn’t say whether she believes the Cecil costume reaches that never-OK line, such as blackface: “I think adults get to decide what they want to wear for Halloween. “This is the one that stood out for me.”

The lion-hunting dentist is just one of about 14,000 costumes Weeks sells at Costumeish and a larger site, Brandsonsale.com. So far he has sold 50 bloody dentist costumes. Weeks plans a reverse take on Cecil with a lion suit that comes with a severed human head, and possibly another costume with extra-large trousers and little kids sticking out one side for people looking to dress as Jared Fogle, the fallen Subway pitchman who faces charges of paying for sex with minors and possessing child pornography.

But even Weeks has a line.

“I still won’t make twin tower costumes. … I get requests for that all the time,” he said. “The tragedy that happened with the TV reporters who were killed, that would be way off-limits. Anybody who wanted to dress up as them would be disgusting.”