How to save the country’s only all-steel church? | Lifestyle.INQ ❮ ❯ 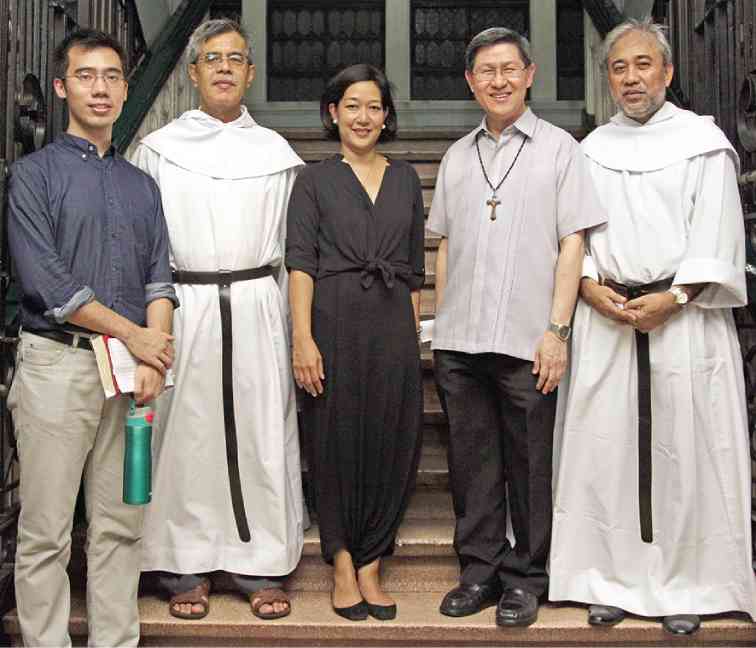 How to save the country’s only all-steel church?

Upon arriving from a trip to Rome recently, one of the first things His Eminence Luis Antonio Cardinal Tagle did was to perform in a sacred music festival at the San Sebastian Basilica in Plaza del Carmen, Quiapo, Manila.

“I get invited to a lot of these events, not so much for the quality of my singing, but for face value,” quipped the Cardinal the night of performance last May 30.

Accompanied by the San Sebastian Chamber Singers, the San Sebastian Parish Rondalla, and members of the Halili-Cruz Dance and Ballet Company, Cardinal Tagle delivered an earnest rendition of one of his favorite songs, “Sanlibong Buhay,” before a crowd that made sure to record his performance on their cell phones and iPads.

A brainchild of Joey Vargas, artistic director of San Sebastian College’s Center for Culture and the Arts, “Musica Sacra” was spearheaded three years ago by the San Sebastian Basilica Conservation and Development Foundation.

Its aim is to promote the church as a venue for arts and culture, the same way St. Joseph Parish Church mounts its annual Bamboo Organ Music Festival to highlight the unique sound of the instrument declared a National Treasure of the Philippines, says Fr. Rene Paglinawan, local prior of San Sebastian Convent.

For an all-steel building (the only one in the Philippines and one of the last all-metal edifices standing in the world today), the San Sebastian Basilica offers exceptional sound quality, and not just for vocal groups singing a capella sans microphones. The 70-member Philippine Coast Guard brass band has performed here, as has Japan’s 20-strong Maritime Self-Defense band.

Martin Galan, renowned sound engineer and a volunteer of the foundation, was so impressed with the acoustics of the church, he declared that he would actually record in it.

Besides its amazing audio, the church is a breathtaking marriage of architecture and art.

Inaugurated on Aug. 15, 1891, the San Sebastian Basilica was designed by Spanish engineer Genaro Palacios and is the fourth version, after three previous ones were reduced to rubble by powerful earthquakes.

Built at the height of the second Industrial Revolution, the Neo-Gothic-style church makes use of over 1,500 tons of prefabricated steel from Belgium (brought from Antwerp to Manila on nine steamships), exquisite colored glass windows from Germany, flooring by Chinese craftsmen, foundations by a French contractor and the talent of world-class Filipino painters.

Award-winning portraitist and royal court painter Lorenzo Rocha and his students (among them turn-of-the-century artists Isabelo Tampinco and Felix Martinez) are responsible for the basilica’s painstaking marble- and jasper-looking finishes, as well as its detailed trompe l’oeil of saints, angels, evangelists, and architectural details on the metal ceiling and walls.

Over a century later, however, it’s clear that the basilica has seen better days. While it remains standing, thereby proving Palacios was right in choosing metal to counter the strongest of quakes, working with steel is not without its issues, particularly in a country known for its hot and humid climate.

Through the years, evidence of the basilica’s wear and tear—from numerous leaks to the fragile state of its ceiling art—has been addressed, albeit inappropriately, in well-meaning repairs.

Recently, the foundation presented the findings of an exhaustive two-and-a-half-year diagnostic study on the deterioration of the San Sebastian Basilica. The study was funded by a 2012 grant from the Ambassadors Fund for Cultural Preservation, made possible by the US Department of State.

While fascinating, given the state-of-the-art equipment and science used to inspect every nook and cranny of the 124-year-old church, the discoveries were also very disturbing. All in all, there were more than 300 leaks in the building, up to three meters of rainwater collected in the church’s hollow columns, and advanced stages of corrosion, causing parts of the basilica—around 40 kilograms of steel—to literally fall off.

Of the colored glass, the team noted some soiling, sagging, missing panes and a few cracked frames.

As for the state of the trompe l’oeil, corrosion on its steel “canvas” has caused the oil-based paintings to flake. One of the sections is so delicate to the touch, if you ran a toothbrush on the image, you would lose it entirely.

The basilica as a boat

How do you save a structure that cannot be realistically restored to its 1891 condition?

A change of tactics is a start. Originally aiming to keep the basilica 100 percent watertight, the foundation now sees the church as a boat, “which is OK with water getting in, because it’s able to dry quickly with proper ventilation and good drainage,” explains Tina Paterno, the foundation’s project director, conservator and full-time volunteer.

Ship builders have been consulted, while some leaks have already been taken care of by the team and hired graduates from Escuela Taller, a craft school for economically challenged youth.

Meanwhile, the foundation is in talks with Henri Oidtmann, the German company behind the church’s colored glass windows. If all goes as planned, the team just might be able to convince the studio to run a training program to teach Filipinos how to make colored glass.

Remarkably, there’s even good news for the seemingly hopeless case of the trompe l’oeil. Conservator Christine Leggio noted how a varnish treatment on one of the panels some 20 years ago delayed the deterioration of both the metal and its painting.

Although the foundation is looking to complete restoration in 10 years—now seven, if you include the three years it took to diagnose the basilica—every second counts.

“We have to act really soon,” urges Paterno. “Corrosion is an ongoing process, and the positive structural findings I presented may not hold true for much longer. Now is a really good time to intervene.”

More than a hundred years ago, the San Sebastian Basilica was the result of a collaborative effort among individuals from different countries and disciplines. The same holds true in its restoration today.

More than 40 volunteers from every country and background imaginable—ex-sacristans, lawyers, students, mechanics, tour guides, priests, historians, corrosion scientists, caterers, cultural agencies and embassies—are rallying together, contributing their time, knowledge and resources to ensure this first Philippine shrine to Our Lady of Mt. Carmel, and an entry in the World Monuments Fund Watch List of Endangered Sites in 2008 and 2010, remains a source of pride and joy to its parishioners and Filipinos in the years to come.

“It’s been more than three years since we started conservation efforts and, the more we learn about this church, the more we appreciate it,” says Father Rene. “A lot of people who come to church don’t realize the beauty and complexity behind it. We have a treasure in our midst, and we have to take care of it.”