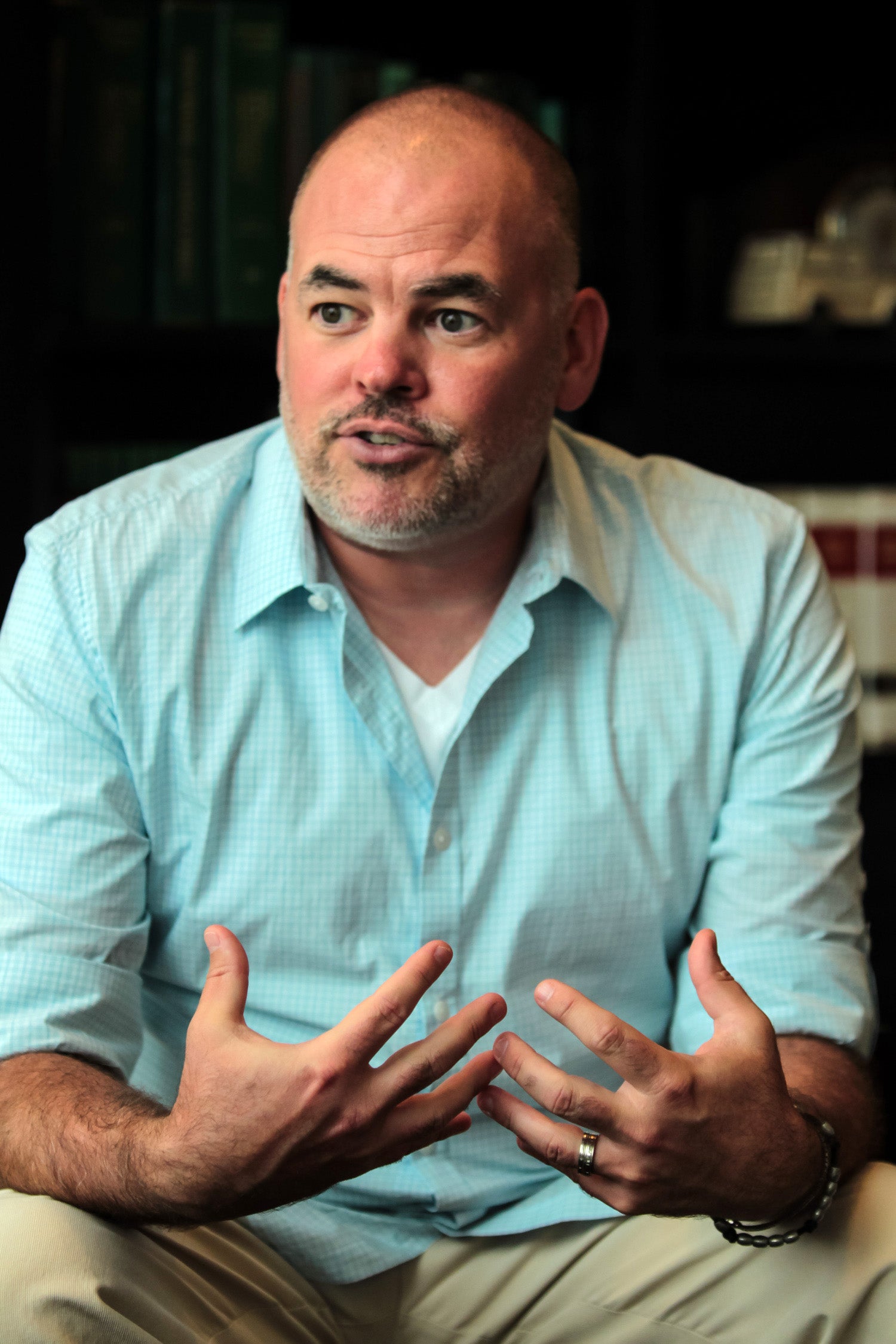 Matthew Quick is the ‘rock star of hope’

FOR A lot of people, Matthew Quick is synonymous with “The Silver Linings Playbook,” the 2008 novel that got turned into a film featuring the quirky, unexpected romance of Pat and Tiffany, played respectively by Bradley Cooper and Jennifer Lawrence. At the Oscars, Cooper was nominated for best actor and Lawrence won best actress. But he is more than that book.

What won people over was “Playbook’s” tale of a man— scarred inside—who seeks redemption and doesn’t stop trying. This tale of optimism amid doubt and naysayers is at the heart of the appeal behind Quick’s work. His books, including 2014’s “The Good Luck of Right Now” and 2015’s “Love May Fail,” invariably featured kooky characters recovering from something terrible or a really big change.

Quick—who also goes by “Q”—was in Manila for National Book Store and Raffles Makati’s Philippine Literary Festival 2015. He has an ability to whip up wonderful characters who are wounded and yet believable. “For me, it just comes from figuring out who they are and trying to get to the root of their problems,” he explains. “I try to figure out where they’ve been, what’s happened to them and what happens to them. I’m a first-person writer, so I try to find that voice.”

This is a special ability that he says has proven to be both boon and bane, a gift and curse. “I’m somebody who’s always been empathetic in some ways. I pick up and channel other people’s emotions,” he says. “There’s a certain level of responsibility. I’ve never been a surface-level person. It can create complications.”

He should know. Quick taught high school English in south New Jersey for seven years before giving that up to write full-time. “I miss working with young people,” he says, though he doesn’t miss the humdrum stuff like politics, parents and papers. “Young people have received less hits. Young people get a bad rap.”

Another thing that Quick loves to include in his books is sports. His full-throated support for the Philadelphia Eagles is front and center in “Playbook,” and basketball is the connective tissue between the two protagonists in Quick’s 2012 novel “Boy21” (Quick coached high school basketball).

Growing up, the Eagles was all he talked about with his father. “Sports is a metaphor for so many things,” he says, making a reference to the Philadelphia-set 1976 film “Rocky.”

“It’s not really about boxing, it’s about a guy who’s trying to get his life together,” he says. Quick’s books are populated by this sort: “Good-hearted people who care about other people but cannot set boundaries for themselves and other people. It’s great for drama but not in real life.”

Real life has been good for Quick, and this is something he shares through his underdog protagonists. But it actually doesn’t come easy. The more educated people he hung out with, the more they tended to scoff at optimism, like you have to be a simpleton to believe things will get better. Remembering the people from the Philadelphia area where he grew up, Quick says, “The optimism in their stories was all they had.”

He is a good example of what he writes. Quick recalls people pooh-poohing his chances of being published because he didn’t have the right pedigree or come from an Ivy League school. “I can do this, I told myself, and I look back now and that’s a wild story. I think the stories we tell ourselves often have a way of coming true.”

“Playbook” has been noted for its nuanced portrayal of mental conditions. Quick has struggled with depression and anxiety, but didn’t plan to write about it. “It wasn’t until I had finished the book that I realized I had subconsciously tricked myself into writing about them,” he says. “It seems bizarre now.”

“Playbook” isn’t going to be the lone Quick foray into film. “Right Now” and “Love May Fail” are being adapted into films by screenwriter Mike White. Quick loves White’s work, but he is also working on original screenplays, six of them.

It is obvious then that Quick loves the movies. Quick and his wife Alicia go to the movies once a week and watch films at home all the time. Among his favorites are “The Shawshank Redemption,” “It’s a Wonderful Life” and, of course, “Rocky.” His taste in books runs through the works of Kurt Vonnegut, J.D. Salinger, Haruki Murakami and Mark Twain.

But when he’s not watching movies or reading, Quick is of course busy working on more tomes chronicling people reaching up to the stars from the gutters, to wildly paraphrase Oscar Wilde.

After all, Quick’s second book, 2012’s “Sorta Like a Rockstar,” features a lead character named Amber Appleton, who is described as a “rockstar of hope.” That sounds like the perfect description for Matthew Quick and what he’s doing: “I have been pessimistic at some times in my life. I’ve been optimistic at other times. I am at my best when I am optimistic.”