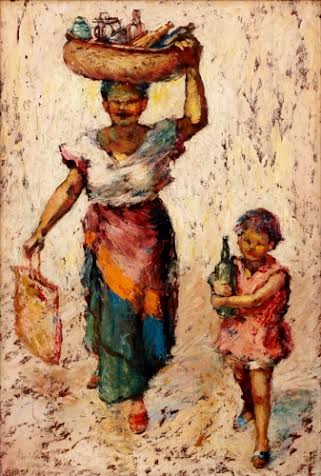 LÉON Gallery has assembled 180 pieces of artworks, antiques and objets d’art from distinguished provenances for its Magnificent September Auction 2015.

Formal bidding will be held on Sept. 12 at the G/F Eurovilla 1, Rufino corner Legaspi Streets, Legaspi Village, Makati City. Preview will be on Sept. 5-11, 9 a.m-7 p.m.

León Gallery director Jaime Ponce de León says the September auction is “different in a sense that we are offering probably the finest of art pieces that would be so difficult to obtain in normal circumstances.”

De León says “Boti! Garapa!” and another work by BenCab, “Scavenger” (signed and dated 1966), have fascinating histories and back stories.

As part of the postwar rehabilitation efforts of the Commonwealth government of President Sergio Osmeña, with the aim to reconstruct the country’s damaged cultural institutions and the “renascent vigor of Philippine culture,” an exhibition of paintings of Magsaysay-Ho—47 artworks, including “Boti! Garapa!”—was held at the United States Information Library in Intramuros on Feb. 23-March 10, 1946, with First Lady Esperanza Osmeña as guest of honor at the opening reception.

In 1966, BenCab, all of 24 years old, together with his brother Salvador and friends Bibsy Carballo and Francisco Navarro, opened Indigo Gallery on Mabini Street with his first solo show of some 16 artworks, including the piece “Scavenger.”

Debuting as well was “Sabel,” the most recognized subject to appear on BenCab’s canvas, a real-life vagabond who used to roam around Bambang where the artist grew up.

“It is fascinating to note that Magsayasy-Ho’s ‘Boti! Garapa!’ was retrieved from a garage sale for the trifling sum of $20 and BenCab’s “Scavenger” was found at a Salvation Army sale for $4.99!” Ponce de León says.

Another important piece is Ang Kiukok’s 1959 oil-on-board “Still Life with Mangoes,” one of the artist’s very early works. It has a starting price of P2 million.

“Sin Titulo,” Fernando Zóbel’s stunning oil-on-canvas work from 1963, is one of the largest and more complex art pieces by the artist to come out of this period.

“The resulting work presents a totally different approach to canvas, all the more ethereal and sophisticated,” Ponce de León says.

Rounding off León Gallery’s survey on array of contemporary art pieces led by Ronald Ventura with his untitled work from 2010 and a series in mixed media from 2005 and 2006.

Rodel Tapaya’s 2015 acrylic-on-canvas “The Fairy’s Flower Garden” (P600,000) is a “powerful narrative where his vivid renditions give to form what we ourselves imagine.”

Solomon Saprid’s 1989 brass sculpture “Lovers” has the starting bid of P600,000. The artist’s other piece in the auction, a wooden sculpture titled “Crucifixion” (P200,000), is a solemn interpretation of the suffering of an outstretched Christ.

Three glass sculptures by Ramon Orlina will be collectively auctioned off at P200,000.

National Artist Napoleon Abueva explores the inexhaustible possibilities of motherhood imagery in his wooden sculpture “Mother and Child,” which has a starting price of P200,000.