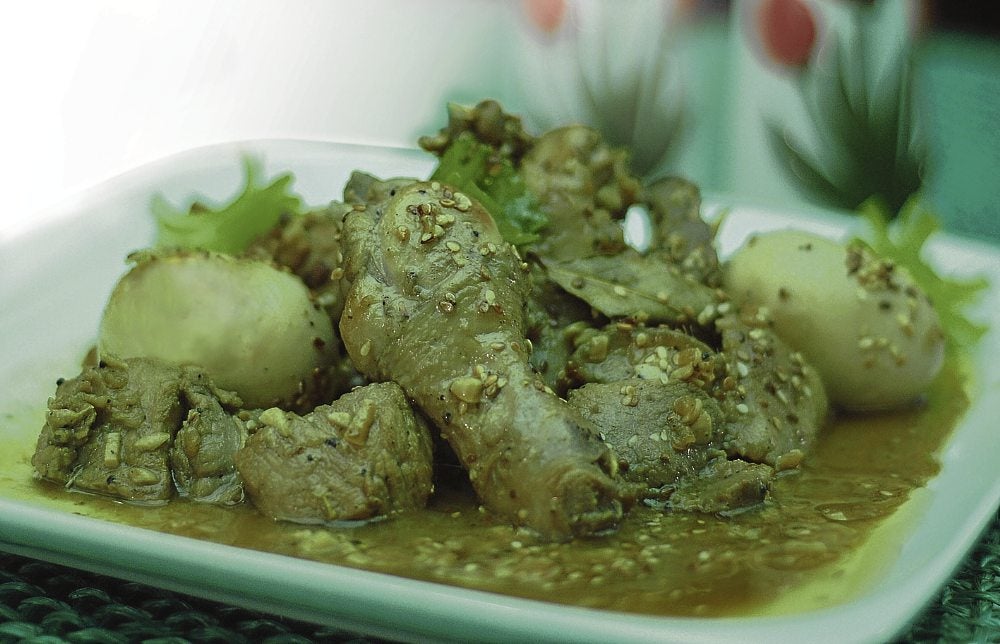 ‘Adobo’ with milk, honey and wine or oyster sauce–take your pick 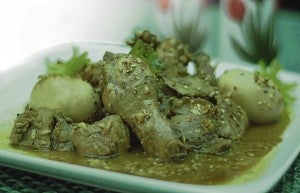 One rainy afternoon, a group of friends came together to indulge in their passion for good adobo.

They brought their own individual versions of the quintessential dish—each with distinctive ingredients, flavors, even table presentation, such that the gathering instantly became an adobo festival.

“There’s joy in food, we believe,” said Rudy Milay, who’s been friends with Precy Bernardino, Clarita Bernardo and Violy Fueden for quite some time now. “Our common denominator is our love for good food, and good adobo is one of them.”

Each of them has his or her own take on adobo.

Milay, a foodie and  baking hobbyist since the ’80s, enhanced his adobo sauce with evaporated milk, which made the dish more creamy and tasty. There was also a hint of sweetness, courtesy of the soda added to the mixture.

Bernardino, a businesswoman, mixed the oyster sauce with soy sauce and vinegar to make the pork spareribs more enticing, savory and flavorful. Her version, though, was a bit dry, but there was  an extra sourness and saltiness to the dish.

A former teacher and caterer, Bernardo whipped up a more gourmet-ish adobo, playing with various elements, such as honey, white wine, sesame oil and sesame seeds. The lovely result: a rich and ultra-creamy concoction that melted in the mouth. The honey and wine lent the dish a richer flavor, while the sesame seeds added texture.

Fueden, who hailed from Sorsogon, offered an adobo that blended coconut milk and lots and lots of chili, for a spicy punch. The fragrant and smooth taste of the coconut milk overpowered the sourness of the vinegar, but the chili only perked up the taste for that extra kick.

“Adobo is one dish you can enjoy any time of the day for the whole week, be it breakfast, lunch and dinner, and even for midnight snack,” said Bernardo. “It’s also your best bet when you go on a picnic or long trip, or on a potluck party. It doesn’t spoil.” 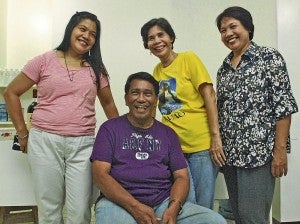 Milay and Bernardino are both members of the Spirit of Love, a Catholic Charismatic Community based in Quezon City. They are popular for their respective adobos, and whenever they have big gatherings they cook their adobo for the 300-plus members.

Milay has been cooking adobo with evaporated milk for more than a decade now, after he saw his uncle add milk to his beef steak.

“I was surprised to see the milk mixed into the beef steak, so I figured it would also be nice to put milk in my adobo to make it richer and tastier,” said Milay.

Bernardino, on the other hand, learned her dry adobo with oysters from her sister, and has been cooking it for more than a year now. 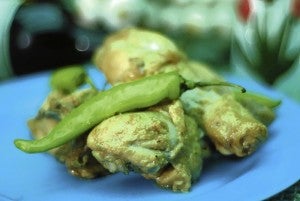 Bernardo studied culinary and food processing under Tesda (Technical Education and Skills Development Authority). It was here that she learned to work on different kinds of adobo and came up with her own gourmet version.

Fueden’s adobo with gata was a recipe handed down from her grandmother. Coming from the land of hot and spicy dishes, Fueden grew up eating fiery adobo almost every day.

Here, they share their recipes, with the assurance that any homemaker can easily whip up these dishes with flair.

In a container, combine soy sauce, oyster sauce, ground pepper and pork. Put it in the refrigerator, marinate overnight. Sauté garlic until brown, then add the marinated pork. Simmer for 30 minutes or until the pork is tender with occasional stirring. Add vinegar and bring to boil for 2-3 minutes without cover. Lower heat and sprinkle with sugar. Mix well. Serve hot.

Calamansi juice (or 6 pcs of calamansi)

One can Carnation evaporated milk

Chicken and Pork Adobo with Egg and White Wine

Marinate chicken and pork with the above marinade for 2-3 hours. Then, heat oil in pan and sauté the marinated pork and chicken with onion and garlic. Add white wine, honey, sesame oil and bay leaves. After 15 minutes, remove the chicken and add the egg. Let it simmer. Once the pork becomes tender, return the chicken in the pan and cook in medium heat until golden brown. Garnish with onion leeks and sesame seeds. Serve hot.