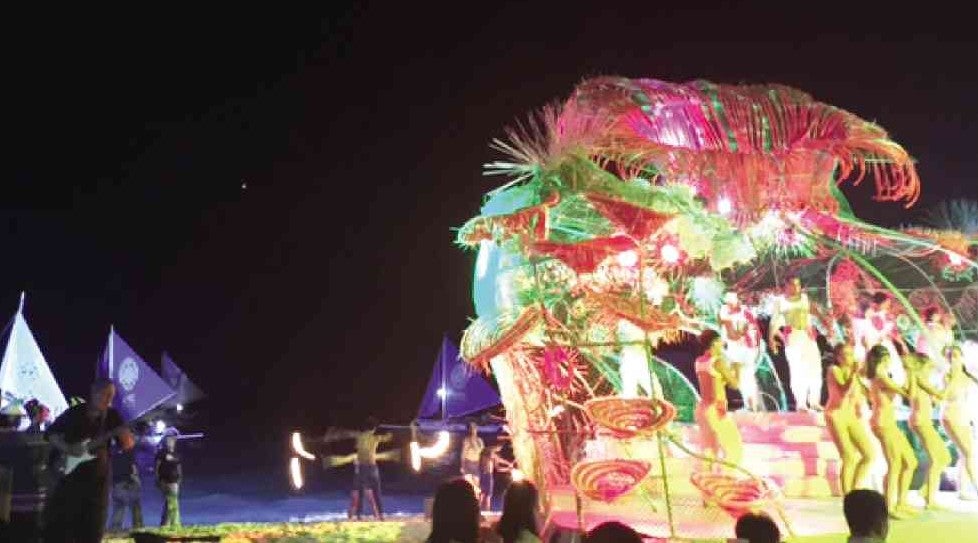 “PARAW” sailing in the dark night is a stark contrast against the luminous stage designed by Leeroy New. THELMA SAN JUAN

Without so much fanfare, the Philippines this year has been hosting thousands of delegates to the series of Apec (Asia-Pacific Economic Cooperation) meetings held in various parts of the country, from Boracay, Iloilo, Cebu, to Tagaytay and Makati. And we have been doing it with aplomb, creativity and taste—not a show-off of opulence.

The meetings will culminate in November when the heads of state of member nations fly to Manila for the 2015 Apec Leaders’ Summit. The last time the country hosted the Apec heads of state was in 1996.

Beginning Sept. 4, Cebu rolls out the hospitality carpet for the Apec delegates. What Cebu has in store should be something to look forward to.

What we have seen so far has been very impressive. It’s been a commendable effort that does the country proud and leaves us—a regular eyewitness to the activities and the setting—impressed with how the organizers have been marshaling Filipino resources and materials ingeniously, tastefully—and always, with a twist or surprising innovation that projects what is uniquely Filipino.

They prove that we can project ourselves on the global stage without resorting to extravagance. Nothing over the top. Indeed, all this has been in keeping with the style of this current administration—not opulent, but a tasteful, dignified projection to the world.

The Apec creative team led by former Cultural Center of the Philippines (CCP) president Nes Jardin has been working under the Office of the President, the Departments of Foreign Affairs, Trade and Industry, Tourism and Finance, Transportation and Communications, Energy, Agriculture, and Neda, CHED—indeed almost all the departments, the local governments and the Apec Business Council representing the private sector.

It’s a dynamic collaboration of government and private entities, and the creative team has been tapping the country’s leading artists, directors, performers—the creative industry led by the CCP under artistic director Chris Millado.

That the Apec exercise hasn’t been monopolized by a single culture faction, unlike in the past, is an encouraging sign of how this administration has been trying to level the playing field, not only in business and industry, but also in other sectors.

As these photos show, the Apec event held in Boracay last May was nothing short of spectacular. Like the other Apec shows held in the country, it had the “wow factor.”

The Apec culminating show was held on the stage designed by sculptor Leeroy New—a tantalizing art installation evoking the giant shapes of corals and sea creatures. It rose on the beachfront of Shangri-La Boracay, set against the setting sun and the “paraw” sailing behind. In the remaining light, it cut a stark silhouette against the puffy clouds. At nightfall, it became a kaleidoscope of light on which top entertainers like Bituin Escalante performed.

Garden lights on the ground were fashioned out of reused plastic cups.

Even the meeting rooms at Shangri-La Boracay carried the sun-and-sand theme.

The center of the U-shaped seating was a carpet of sand littered with shells, twigs and arrangements of local orchids. The delegates did serious work in this vacation setting—in the confines of the conference room.

While previous and future country hosts of Apec may have the limitless logistics to produce grandeur, in the case of the Philippines, it is the Filipino design and creative talent that produces the wow factor on the global stage—progressive, dynamic, young talent. And that is working on a limited budget.