The rise of luxury–but not loud–fashion brands, and away from the malls | Inquirer Lifestyle ❮ ❯ 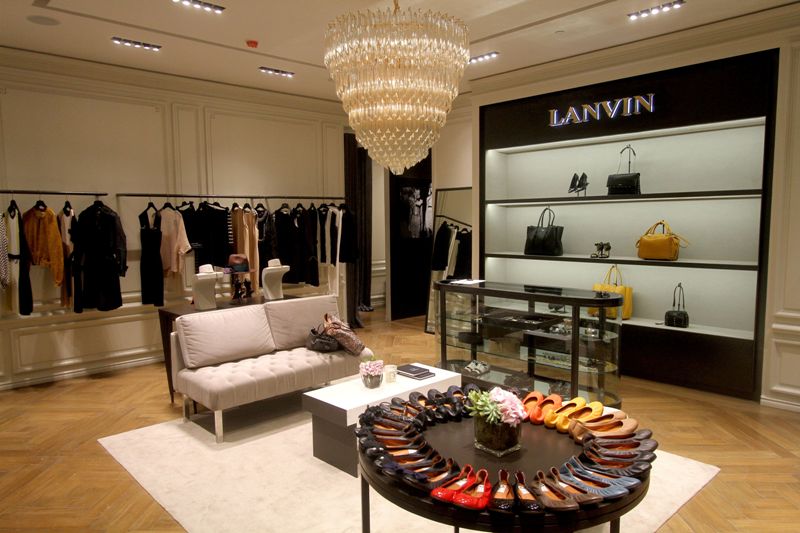 LANVIN’S first boutique in the Philippines at 8 Rockwell in Makati carries the 125-year-old label’s entire line.

The rise of luxury–but not loud–fashion brands, and away from the malls

Luxury fashion retailer Mark “Jappy” Gonzalez is on a roll.

The past few days have seen him begin to transform a Makati suburb into what one fashion insider described on social media as “first world,” with the much-hyped opening of the French patisserie Ladurée and, more quietly next door, the first Philippine boutique of Lanvin.

He’s not quite stopping there. The next few days will also see the unveiling of the second Balenciaga store carrying the brand’s entire line, as well as the Makati outpost of the multilabel homme et femme, in the same new building, 8 Rockwell, all under Gonzalez’s H&F Retail Concepts.

All four shops are in the same neighborhood as his other multilabel store, Univers, which carries such labels as Raf Simons, Maison Martin Margiela, Sacai, Rick Owens, Junya Watanabe, Thom Browne and 3.1 Philip Lim.

While opening shops of flagship and portfolio fashion labels isn’t new in the Philippines, Gonzalez is taking a different approach by putting his new stores not in a high-traffic area like a mall, but in the affluent and less densely populated Bel Air-Rockwell neighborhood. He has also steered clear of the new casinos, where many upscale global brands have been setting shop.

“We’re not a casino brand,” Gonzalez says. “We’re not currency. Our brands aren’t something you buy [just because] you have cash now, or trade or sell off [quickly] if you need cash. These aren’t popular brands [in the same way as] Louis Vuitton or Gucci.”

Lanvin and Balenciaga have long been part of homme et femme’s portfolio, and their market performance has warranted stand-alone shops.

Unlike other luxury retailers, Gonzalez is bringing the full line of both labels, not just the handbags and shoes. Anyone who has been an homme et femme customer would know Gonzalez’s company is all about the fashion; the bags are incidental.

“We’re not an accessories store. We’re more a fashion store,” he says, and the success of the first homme et femme at Shangri-La Plaza Mall was based largely on that.

“Primarily, Balenciaga is a fashion brand,” he notes, “it just happens that it sells bags, which is a very welcome bonus. Even then, the accessories that will be in the store are more fashion-driven, the ones you see in the show. So we’re not carrying the basics there.”

Lanvin, especially, isn’t yet big on accessories, as its core business is apparel. Its Manila opening is well-timed, as the brand is marking its 125th anniversary. Its Rockwell boutique also carries shoes, jewelry, small accessories and handbags.

When homme et femme opens, it will carry the more established brands such as Dior Homme, Valentino, Jil Sander, Celine, Roland Mouret and Valextra, which are currently at Univers. Univers will then have bigger space for the “more playful” and newer brands.

The Philippines differs from other Asian countries where luxury retail depends equally on locals and tourists. Here, it’s 90 percent local, says Gonzalez, and it provides a “more stable” business for retailers like him.

“Of course, when you open a store you’re buying more of a brand, but it doesn’t necessarily mean very much more,” he points out. “You’re not looking at double the numbers. Before we pursue that, we’re looking at the big base already.”

The first Balenciaga franchise, which opened a few years ago at Greenbelt 5, was prodded by a high demand for the brand’s handbags, which was essentially taking over a large space at homme et femme.

“It was just making so much money, and homme was losing the mix already, because a multilabel has to have a certain level of selection. If one-fourth of your store is already bags, that’s not a selection. That’s why we decided it’s time this thing moved from there,” he says.

“It’s the same with these brands that we’re opening. They were already occupying too much representation in the multilabel, and they’re big enough to go on their own. I mean, the supply chain is good. Those are the things we look for—the supply chain, the press machinery behind it.”

Gonzalez doesn’t call his move a “gamble,” given how relatively small the luxury consumer market is here. “It’s really more calculated,” and it’s “big enough” a market, he says.

His company has largely benefited from quickly maturing luxury consumers, who have tired of buying logo brands.

“If you see China, there’s a rise of retailers like us,” he says, “because they’re done with the big labels, and they’re now going quieter.”

And similarly, like China, which imposed a crackdown on luxury spending, many luxury customers here are going for less-conspicuous labels. Gonzalez’s company is largely insulated from such situations.

“We have no logos. For fast money, you buy fast things like watches and LV,” he says.

Still, there are no guarantees of a brand’s success, however buoyant the market is.

“That should greatly reflect more on the middle-class market,” Gonzalez says of the country’s reported high GDP. “Technically you don’t see the effect of that in retail until after about five years. They pay for other things first—homes, cars. After that, it reaches retail. It takes a while. In economics, you have to have that climate consistency for about 10 years before it has any direct impact on retail.

“I think we’re reaching that. People who come in big now are investing in that. It may not necessarily happen in two to three years, but it will happen. And when it happens you have to be there.

“It’s the same for us; we were quiet for 10 years before we even started doing things, and in the end, that was our incubation. When the market was ready, so were we. Our supply chain was clear, everything was in place, it was just a matter of building it and making it happen.”

This retailer is uncowed even as he’s faced with rivals with even bigger guns.

“I don’t think we operate on the same level, to define ourselves as competitors, though we sell similar products and like-priced items,” he says.

If Gonzalez comes off as cocky, the moxie likely comes from having proven that he’s a force to reckon with in local retail. From just a single store 10 years ago, he now has 24 doors, eight franchise brands, including Balenciaga and Lanvin, and three multilabel boutiques. Univers alone carries 40 brands. With home accents now sold at the latter, he says a home design store isn’t farfetched.

But for now, his full attention is just on unveiling the 8 Rockwell stores, the openings of which have been delayed for months.

“We’re taking a big risk,” he says. “It’s quite a sizeable investment with these four stores… It’s a big step for us.”

But perhaps not too big for this diminutive guy with big goals.