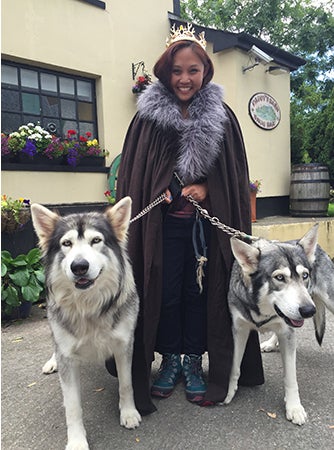 Diary of a traveling fangirl (Part 2)

(READ: Diary of a Traveling Fangirl)

While I technically went to Malta for a conference, I must admit that its connection to the show was a significant factor in my decision to go. As the conference schedule was in conflict with the schedule of the tour of local filming locations, I had to manage visiting  several key spots on my own, and they did not disappoint.

If Croatia saw the height of popularity of the series, Malta witnessed its birth. When HBO came to film Season 1 in this tiny island-country in the middle of the Mediterranean, it had no idea how massive the show would become. That country’s own medieval sections, gates and walls served as King’s Landing until production moved to Croatia the following season.

A big controversy over environmental damage to Dwejra Bay, a protected site, had forced HBO to find other places to film. Standing on the shoreline, I could see why the producers wanted the majestic Azure Window as a backdrop for Khal Drogo and Daenerys Targaryen’s wedding. I saw the spectacularly unique fossilized surface of the rocks and understood the uproar over the failure to protect it better. Before parting ways, Malta left an indelible mark on “Game of Thrones,” and set the tone for the look and feel of future filming locations.

Feeling adventurous, I took a local bus on my own from the modern capital of Valletta to the medieval capital of Mdina. I found the City Gate, used as King’s Landing’s own, easy enough. With tips from travel and fan blogs and my phone’s GPS, I made my way around the  city’s winding alleys to the filming location in Piazza Mesquita. Twilight was approaching when I found the spot where pivotal scenes in Season 1 were shot. A British family was curious as to why I was shooting what seemed like a pretty but generally random corner. I explained my intent and became an instant tour guide.

It was only fitting that my “Game of Thrones” journey ended in the beating heart of the whole operation. Once known for violent bombings and clashes between Republicans and Unionists called The Troubles, Belfast has had a dubious history. Besides being the home of Europe’s most bombed hotel, its other claim to fame is building what was then the largest ship in the world that sank on its maiden voyage.

In the same massive building where the Titanic was painted now sits the Iron Throne. Known as the Paint Hall, Titanic Studios is the biggest in Europe. Many, if not most, indoor scenes from Season 1 all the way to the current season were filmed there.

Not much can be gleaned from beyond the fences, as props were well hidden in sheds and covered with tarps. A big sign by the gate forbade photography. It was a bit disappointing not to catch a glimpse of aWesterosi carriage or a Dornish ship. Then again, any self-respecting fan would steer clear of anything that could spoil, or worse, misinterpret, the upcoming season’s plot twists.

Another area cloaked in privacy was an active filming location, Magheramorne Quarry in County Antrim. Sets for Castle Black and The Wall were up and running when our bus whisked by, too fast for me to take a decent shot. It had also been used for the Battle of Blackwater Bay and the Wildling village of Hardhome.

While active sets were off-limits to the public, past filming locations were open and fair game. Not wanting to miss a thing, I took two different “Game of Thrones” tours in Northern Ireland. The first one was with “Game of Thrones” Tour Belfast. Our guide Thorn was a mountain of a man who has worked as a member of the Night’s Watch. Our route included stops at places that fans will recognize as Winterfell and the woods where the direwolves were found.

A fun treat for the group was meeting two Northern Inuit dogs who played direwolves on the show. Not to be outdone, their human family also appeared on screen as Wildlings. 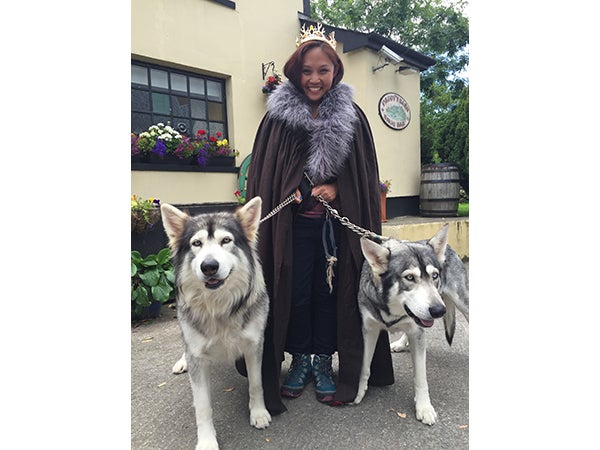 The second tour was with Derrick of McComb’s Coach Travel. He took our group to the scenic Causeway Coastal Route through the picturesque glens of County Antrim, north of Belfast. The rugged Northern Ireland coastline provided scenic backdrops that lent well to the scenes that featured the birth of Melisandre’s Shadow Assassin and Theon Greyjoy’s return to the Iron Islands through Pyke Harbour. A quiet country road has also gained worldwide recognition as the King’s Road where Arya and Gendry escaped King’s Landing.

At the end of the tour, I asked to be dropped off at the city center. Since arriving in Belfast, I had been hoping and praying for a sighting or chance encounter with a cast member. The luck of the Irish did not let me down.

I was walking by the entrance of a hotel when I spotted somebody. I doubted what I saw until I noticed Alfie Allen (Theon Greyjoy/Reek) with his blonde hair and pale skin standing there as well. It was then that I finally believed that the guy in front of me was no other than Kit Harington, the British actor popularly known as the darkly charismatic member of the Night’s Watch and everyone’s favorite bastard, Jon Snow.

What transpired next could have totally been a dream if it weren’t for the physical evidence that the encounter produced. As part of his contract and due to the perplexing way his character closed the last scene of Season 5, Kit has not been agreeing to pose for any photos. Not wanting to invade his privacy with sneaky paparazzi shots, I channeled the sort of cunning that I hope would make Tyrion Lannister proud.

After steeling myself with a half-pint of Guinness, I called the waiter over and told him that I wanted to order food to be sent to Kit’s table: Bang Bang Chicken and vegetable tempura, to cover preference or dietary restriction. I ordered baby burgers, too, but decided to keep them for myself, as I didn’t want to be overkill. I also asked the server to pass along a note I wrote on the back of my “Game of Thrones” tour ticket. On it, I thanked Kit, Alfie and Ben Crompton—another actor from the show who had later joined their group—for their work on the show.

While waiting for the food to be served, I mindlessly leafed through a Northern Ireland tourism booklet. A few minutes later, out of the corner of my eye on the right, I saw a figure in black approaching me, Kit himself, who then proceeded to ask: “Excuse me, were you the one who sent the food over?”

“Yes, that was me,” I replied. “I didn’t want to bother you but wanted to send a little token of appreciation for the work that you do.”

Kit was smiling when he said: “Thank you! You must have read my mind, because I was hungry!”

Then Ben came up and thanked me, too.

Like a diligently informed fan, I told Kit about understanding that I couldn’t take a photo with him and that I wasn’t going to ask him any filming questions.

I handed him a blank postcard. He asked for my name and scribbled on the postcard. Yes, I said, and briefly mentioned how I’ve traveled to all the other countries where the series was shot.

Kit handed me the postcard. I told him one more time that I knew I couldn’t take pictures with him and instead asked for a shoe shot.

“A shoe shot?” he asked, in the same Jon Snow voice and tone I’ve come to know and love.

Kit and Ben looked puzzled. Nevertheless, Kit started dusting off the tip of his brown leather boot then stuck his right foot down.

I put my hiking boot beside his and told Ben to step in as well.

When the plan became evident, Kit smiled and said that he’s never done it before: “I like this.”

I took the shoefie and thanked them. I wished them luck on filming Season 6 and said I was looking forward to it. They thanked me again for the food and returned to their table. 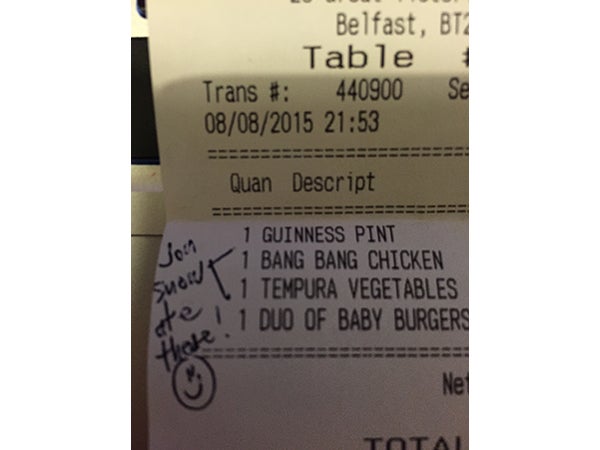 And just like that, Kit Harington/Jon Snow walked out, as quickly as he walked into my life.

I sat around for another hour and a half, slowly munching on my baby burgers, digesting the meal and the events that just transpired.

It was the perfect ending to my “Game of Thrones” world tour.

Tessa Mendoza Cruz is currently obsessed with HBO’s hit series Game of Thrones. Over the last three years, she has combined her love for the show and her passion for traveling, with the most spectacular ending. She is the founder of the travel blog Viajera Filipina (www.viajerafilipina.com) where she seeks to inspire Filipinas (and everyone else) to get out and see the world.