Stephen Curry in Manila: "This is definitely one of my favorite stops" | Lifestyle.INQ ❮ ❯ 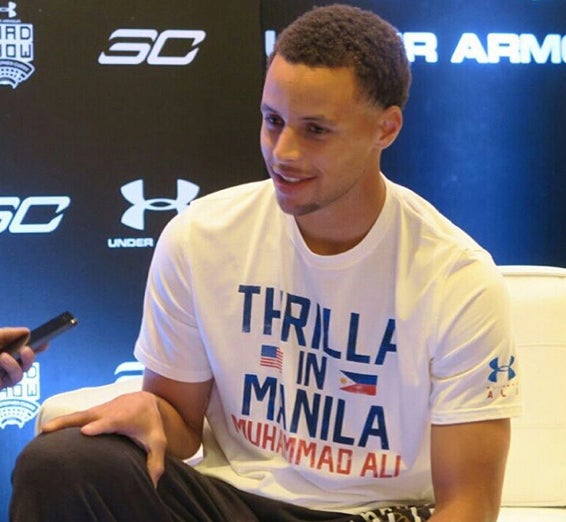 Stephen Curry in Manila: “This is definitely one of my favorite stops”

If there is one thing 2014-2015 NBA MVP Stephen Curry and his Filipino fans have in common, it is heart.

“You can’t measure heart. You’re determined. You work hard, you focus on your goal, you put your talent every single day… You can’t measure this [heart],” Curry told the huge crowd at MOA Arena today during his one-day visit in the country.

On September 5, the 27-year-old guard from Golden State Warriors engaged in basketball drills, shoot-outs and scrimmage with several young basketball players from here and abroad as part of his first Asian tour with the sports brand Under Armour.

Gilas Pilipinas and this basketball-junkie nation carry the motto “Puso” since the 2013 Fiba Asia Championships where they earned a ticket to the 2014 Fiba Basketball World Cup.

“It’s okay if you mess up. That means we’re getting better,” he told the players during the drill.

Earlier that day, Curry met the press at Raffles Makati sporting a “Thrilla in Manila” shirt. The reigning MVP who averaged 23.8 points per game, 7.7 assists and 4.3 rebounds said “you have to show heart” to attain greatness in the sport.

“You spend two to three hours in the gym every day. If you don’t want to go the gym [and] you want to sit at home and watch TV, go to the gym and work on your game. Try to get a little bit better. Embrace your strengths…You have to dribble, pass, shoot, rebound play defense. You have to be able to do all those things to be the best that you can. It makes you stronger along the way,” he said.

Aside from improving his game, Curry aims for a championship and MVP repeat. “I want to do all those things again. I want to be a hall of famer… We have to be better than last year. I have to be a better player,” he added.

Meanwhile, Curry was thrilled with the reception of fans. “This is definitely one of my favorite stops. It’s so special to work in a room like this. It won’t be my last time [here]. I’m coming back for sure.”

Curry, the endorser of Under Armour, is in the Philippines for the second stop of the Under Armour Road Show. He just came from Japan and is flying to China for the last stop of his Asian tour with the sports brand.