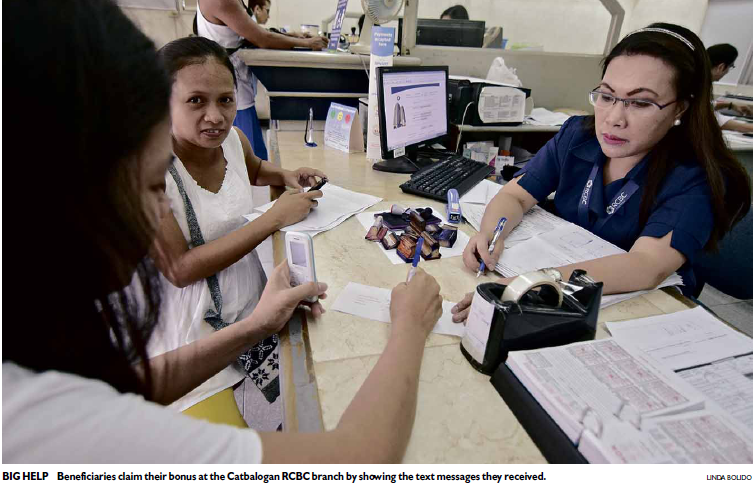 Genalyn Labong, 27, who will give birth anytime soon to her third child, said she did not know delivery at the health clinic was free. Her eldest child was delivered by her mother, a hilot, and her second by another hilot—both at home.

Eighteen-year-old Gina Cadano, who is six months pregnant, gave birth to her first child in a hospital because she “did not know the clinic was open 24 hours.”

A pilot program in Samar and Northern Samar is trying to deal with the serious problem of lack of resources that keep many women in the two provinces from getting proper medical care during pregnancy and childbirth, putting their and their babies’ lives at risk.

The incentive program Mothers Bonus, developed and administered by Population Services Pilipinas Inc. (PSPI), gives beneficiaries P1,500 if they complete a specified number of prenatal and postnatal checkups and give birth in a medical clinic instead of at home.

Government figures showed that in 2010, while the national maternal mortality rate (MMR) or death from pregnancy or childbirth was one per 1,000 live births, MMR was 2.4 in Northern Samar and 2 in Samar.

Of course, when the mother is at risk, so is the child, resulting in high infant mortality or death rates.

Many maternal deaths, medical experts stress, are preventable and the means are simple. Prenatal checkup can identify women at risk so they can have expert care.

No money for trike fare

In the Catbalogan regional health center recently, several Mothers Bonus beneficiaries talked about what a big help the modest amount was to them.

The women said that while they understood the need for healthy pregnancy and risk-free delivery, they could not afford the services they needed, even in government health centers. They said they often did not have money even for tricycle fare.

The women said they were so strapped for cash that they could not even marry their partners. As they had no money, they could not get all the legal documents, like birth and baptismal certificates, for a marriage license.

Only one of the women was legally married, a situation that health workers Edna J. Garcia and Leslie Dy said was prevalent in Samar.

Many women in the two Samar provinces preferred to give birth at home, attended by a hilot or traditional midwife.

Annabel Cabarles, who has given birth and has claimed her bonus; 22-year-old Maria Cristina Ballola, eight months pregnant with her first child; Corazon Manalo, 28, seven months pregnant; and Ella Mae Sinogat, 19, said that before Mothers Bonus, they were reluctant to deal with government agencies, fearing they would not get proper attention.

But they found out that health workers were kind and caring, not bored, disinterested bureaucrats, and there were also no fees to pay, they said.

Andaya said her clinic was more accessible than the nearest government health center to many pregnant women.

The success of the pilot project is attributed to the cooperation and all-out support of partners.

Rizal Commercial Banking Corp. (RCBC), the cash disbursement partner, took steps to make visits as pleasant and convenient as possible for beneficiaries, most of whom, if not all, had not been inside a bank before.

Hugo Turla, RCBC Catbalogan branch manager, said that aside from the bank’s longstanding relationship with PSPI, it also saw an opportunity to enhance its image. He said he   hoped beneficiaries would think of RCBC should they need banking services.

Lisandro Ramos, senior customer relations officer at RCBC Catbalogan, said the bank tried to resolve problems like incomplete documentation while the beneficiary was in the bank so she would not have to return. Bonuses were released in 10-30 minutes, he said.

The smooth implementation of Mothers Bonus was boosted by PhilHealth’s extension of coverage to the poorest in the Samar provinces.

Walter Bacareza, regional PhilHealth vice president, said they reduced the paperwork for enrollment of beneficiaries and speeded up the processing of claims.

“As long as a facility is PhilHealth accredited,” Bacareza said, “they (beneficiaries) could immediately be covered (by health insurance)” and services would be completely free.

Mothers Bonus, which began in December last year and would end in October (redemption of incentives will continue until December), was developed by PSPI through the Philippines Public Health Project to encourage women to avail themselves of maternal health services at health clinics, specifically those accredited by PhilHealth.

Registration for and claiming of the bonus is done via mobile phone. Pregnant women, aged 18-35, get confirmation of their Mothers Bonus’enrollment and the release of the money, which they can show to RCBC, via SMS (short message service) or text.

If they complete the prenatal visits, they each get P500. They each get P800 more if they give birth in a PhilHealth-accredited clinic and an additional P200 after delivery.

She said many women did not have money for fare or lived far or both. If access was improved and financial assistance was given, more women would avail themselves of health services and have safer pregnancies and deliveries, she said.

Although Sydiongco and Bacareza said some local governments expressed willingness to continue Mothers Bonus, beneficiaries said the program showed them they could get professional healthcare at little or no cost.

They said they planned to visit medical clinics even without the incentive for safe and healthy pregnancy.