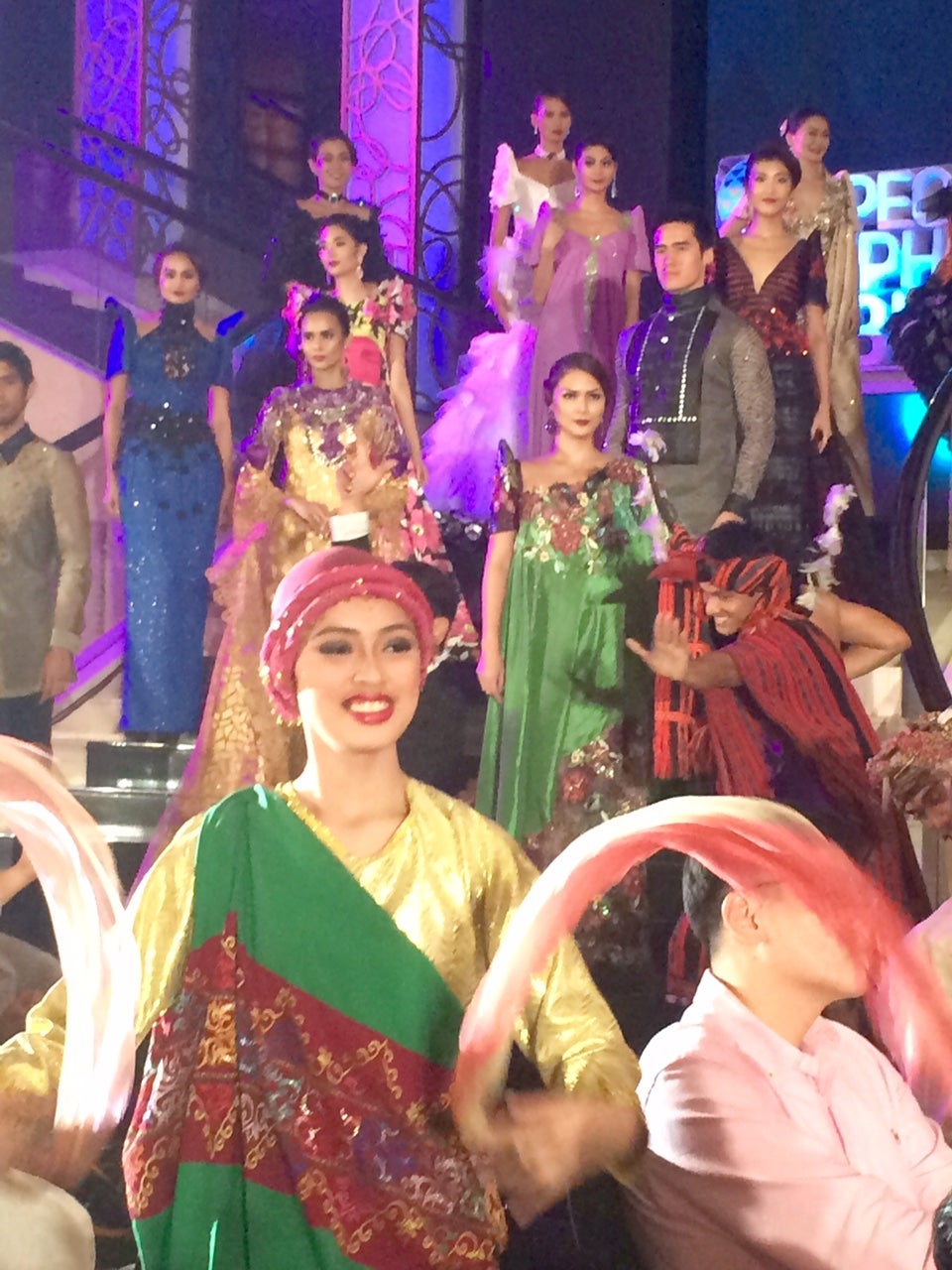 Staff at the Radisson Blu Hotel had to convert its huge, high-ceilinged lobby to a dinner and show venue for hundreds of senior ministers from 21 APEC member-countries since all the hotel’s ballrooms and functions rooms were used earlier in the day during meetings.

Performers, including dozens of costumed dancers from the Ramon Obusan Folkloric Foundation and terno-clad models from Philippine Models Association of the Philippines, had to make do with a small stage that they ended up spilling over to the lobby’s grand staircase and in between tables during the show’s grand finale.

From the onset, the show proved to be a visual feast, as it tried to tell an abridged and stylized version of Philippine history through costumed dancers on stage and vintage images of the country and its people on a giant screen.

“Being Filipino always works,” said Quintos, also a veteran script and feature writer, who did a similar show for the Asian Development Bank’s governors’ ball a few years ago. “By that, I mean showing our indigenous Filipino culture always works.”

“With no apologies,” Quintos didn’t make any efforts to put subtitles as singers OJ Mariano and members of Baihana and Philippine Opera Company belted out such Filipino folk classics as “Bituing Marikit,” “O Ilaw” and “Bahay Kubo.”

“Other countries don’t bother to translate their songs to English as well,” he said. “If you go to, say, France or Malaysia, they don’t.”

Quintos and Cortez managed to bridge the gap by interspersing Filipino songs with classic American jazz tunes by the likes of Cole Porter. They also “jazzified” the medley’s arrangement to make it more appealing to an international audience.

There couldn’t have been a more apt title, as “Fused” seamlessly combined such disparate disciplines as classical music with rap music, ballet with folk dance. Violinist Jobry Cimafranca provided music to a pair of ballerinas from Ballet Philippines before the show shifted its focus to Filipino rap music and dance by members of Kenjohn and the Rockstars.

“After presenting a series of more traditional songs and dances, we wanted to elevate the show’s energy level by featuring something more current,” said Quintos. “But Kenjohn and the Rockstars isn’t just your ordinary rap group. They’re really suave and talented. I also like the fact that they sing and dance to their own music.”

Before the show ended, the three sets of featured performers were sharing the stage with the other dancers and singers. The entry of Obusan dancers in native costumes and models wearing ternos by designer Maxi Cinco added to the finale’s fiesta-like atmosphere.

“I told Maxi not to hold back by presenting his more sedate and classy pieces,” said Quintos. “I wanted texture, volume and color. Kailangan, buma-Valera din ang kanyang mga terno. (His ternos should be Ramon Valera-like.)”

In a way, the word fused also echoes APEC member-countries’ common goal for a more peaceful, prosperous and unified region through a series of regular dialogues backed up by a series of concrete and doable action plans.