In real life or inside theater, Filipinos are literally ‘Singin’ in the Rain’ | Lifestyle.INQ ❮ ❯ 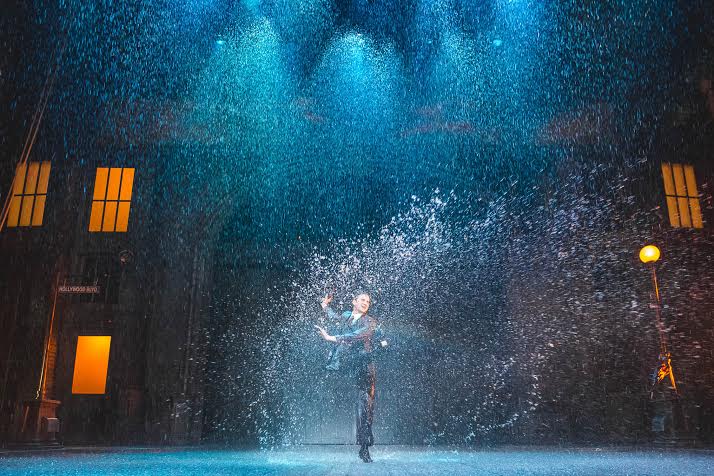 In real life or inside theater, Filipinos are literally ‘Singin’ in the Rain’

“SINGIN’ in the Rain” has been so well-received that its Manila run has been extended to Sept. 13.

The splashing musical’s cast and crew gave some love right back to the local audience as they gushed about Filipinos’ remarkable enthusiasm for theater and the performing arts.

Taryn-Lee Hudson, who plays silver-screen vixen Lina Lamont, says how she and her costar Mark Richardson (who takes on the role of film director Roscoe Dexter) notice that reactions they get from Filipino viewers are those they’ve never encountered in previous runs of “Singin’ in the Rain.”

“There were moments on opening night where we got an applause in the middle of the filming scene—we’ve never gotten that before,” Hudson exclaims. “So we actually started laughing onstage. Hopefully, we hid it very well, but we were like, ’This is crazy!’ So we’re loving the Filipino audiences.”

Hudson adds that viewers in the Philippines seem to fully appreciate the play’s text and storytelling—nuances and all—and this tremendously encourages them to perform better each time.

“They (Filipinos) are very into music,” notes Louis Zurnamer, musical director. “But what I find really interesting about the Filipino audience is that they really listen to everything that’s being said. It’s a much more lively response than we had before.”

And why wouldn’t Manila audiences relate to the storyline and brave wet weather even inside the theater? After all, the resilient and musical Filipino is known, too, for singing in the rain, figuratively and quite literally.

Zurnamer couldn’t help but laud the talent of Filipino musicians involved in the production, describing them as “brilliant.”

“It’s really like playing with putty. You can say one thing and it happens—that’s quite remarkable,” says Zurnamer.

Zurnamer, who was also in the country as one of the assistant musical directors for “Phantom of the Opera” in 2013, says this time around he is particularly pleased with the standard of playing.

“The standard of playing was already high then,” he says. “Filipino musicians have a very good reputation all over the world, and a lot of international productions come here, and so it’s always the same productions—always these West End or Broadway productions—and what they do in every city is pick up another orchestra, so that’s usually the difference, the orchestra and the venue. They’re the things that change. And it’s so comforting when you walk into an orchestra rehearsal and you actually don’t have to worry about that.”

Zurnamer notes that the pieces in “Singin’ in the Rain” hail from the “specific era of Swing Jazz” and aren’t at all easy to pull off. He adds that the music originally featured in the classic film were hit songs produced by MGM studios and that the movie was supposedly a catalogue or showcase of the popular tunes.

And while Filipino musicians in “Singin’ in the Rain” deserve commendation, the people behind

“Singin’ in the Rain” all agree that Filipino audiences deserve a great show every time.

“The Filipino audience is different in a sense that you guys have such a huge musical theater culture and you’ve seen a lot of shows; you’re really cued up on what you want to see and what you don’t want to see,” Hudson says.

This is why, among other reasons, Duane Alexander holds his role as Don Lockwood dear. All throughout the show, but especially when the time to perform the song “Singin’ in the Rain” comes, Alexander strives to give viewers a smashing time despite the actual physical strain he experiences.

With 12,000 liters of water pelting down the stage and somewhat drowning out the music one is supposed to sing and dance to, the task is no walk in the park—at that point in the play, Don Lockwood is strolling along the streets of Hollywood—and even for Alexander, who is also the production’s dance captain.

Alexander adds that, by the time the number is half-through, the water is just everywhere: In his eyes, filling his mouth; in the added weight of his drenched costume.

But whether one sits in the so-called “Splash Zone” (the first three rows where audiences are sure to get wet) or elsewhere in the venue, the experience is just as unique and breathtaking.

For Alexander, it is as rewarding as it is daunting.

“It’s that iconic moment in the show, you can’t let it pass you by,” he says. “For me, it’s literally a dream come true, so you have to forgo all those negatives, and just live in the moment of Don Lockwood having the time of his life, couldn’t be any better—he’s got the girl of his dreams in his arm, his career is about to be saved, and it’s just a pivotal moment in the show and in Don Lockwood’s life. It’s like a musical movie highlight that everyone knows.”