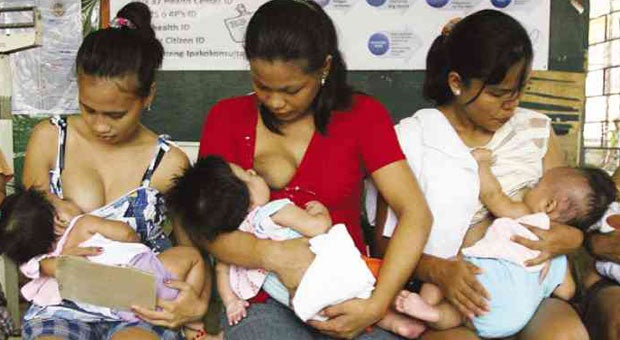 One in four pregnant women in the country is undernourished, a condition that would make breastfeeding their babies difficult later on, according to a report issued by the nongovernment organization Save the Children.

Based on the report, titled “Sizing Up: The Stunting and Child Malnutrition Problem in the Philippines,” 25 percent of pregnant mothers in the country are at risk of giving birth to low weight and undernourished babies because they themselves are not gaining the required weight relative to their age and condition.

“Studies show that one in four mothers is at risk of delivering low birth weight babies and face pregnancy complications because they themselves are underweight…” said the report.

The most vulnerable are teenage mothers or those under 20 years old, said the group, noting that at least 36 percent of those likely to deliver babies who are underweight were very young mothers.

It said that difficulty in breastfeeding, a consequence of the mother’s undernourishment, could impact on the growth and development of their babies later on.

The report reiterated the recommendation of the World Health Organization (WHO) on the early initiation of breastfeeding and exclusive breastfeeding of infants for the first six months, of which the benefits to the health and well-being of both mother and baby have been well documented.

Health Assistant Secretary Gerardo Bayugo said that providing sufficient healthcare services to pregnant mothers was one of the priorities of the Department of Health to ensure healthier children in the future.

“Caring starts in the womb,” Bayugo told reporters at the launch of the report on Thursday. He said among the services provided to pregnant women include prenatal care that will ensure that they get the proper nutrients before they give birth.

The report also said that 3.6 million Filipino children were stunted due to malnutrition, a figure that ranks the Philippines ninth among the 14 countries that account for 80 percent of stunted children in the world.