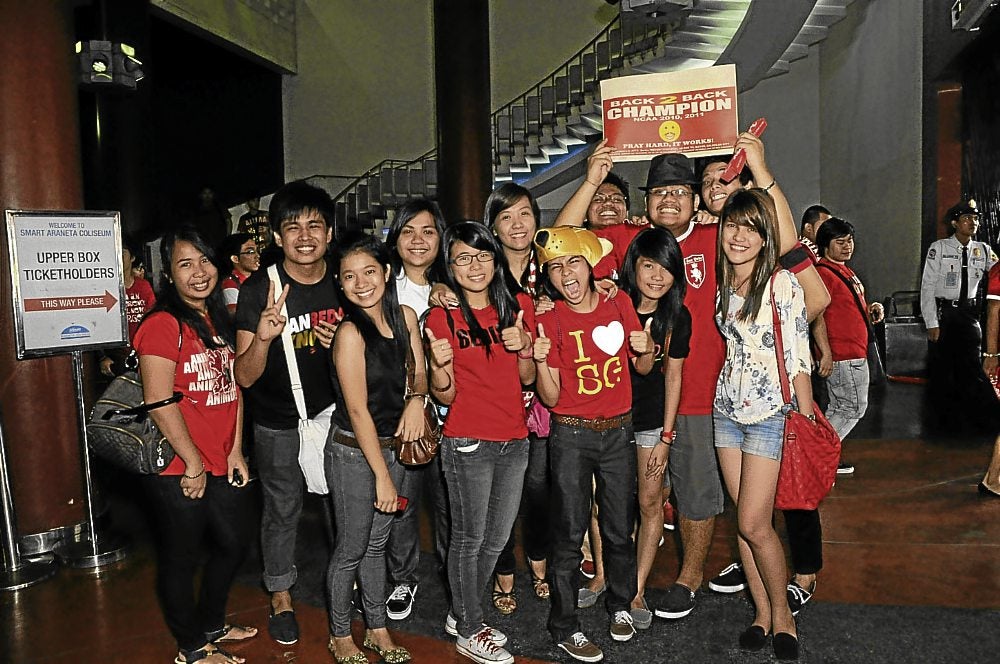 Most people see basketball as a competitive sport, something to feel aggressive about. Some people think of a basketball game as something honorable, a chance for glory or redemption. Others see it as a pastime, to be enjoyed with soda and popcorn.

As a Bedan, I saw basketball as all of these things. At San Beda Alabang, where I studied from preschool to high school, basketball was a major event. It was one of the PE subjects we could choose, one of the highlights of the intramurals, and was the sport we won championships for. To put it simply, it was in our blood.

When I was told I was going to cover the NCAA Philippines 87th Season’s senior championship (Game 2), between San Beda and San Sebastian, I saw this game not just as a chance to

finally see the Red Lions live, but as an opportunity to come home.

On TV, one sees the manic crowd, worked up over a spectacular shot or a game-saving block. In real life, the energy was nothing short of electric. As a newbie to a live basketball game, and a finals game at that, I found myself unprepared for the colonies of red and white at Araneta.

The Red Army was in full force—friends, family, batchmates. Entire generations went in droves, all of them coming together to rally for our boys. Inside the coliseum, the pounding of drums and familiar chanting of the Indian Yell woke the lions in our minds and hearts, readying us for battle.

I found myself alone, in the company of my seniors. Regardless of how old we were, or whether we came from Mendiola, Alabang or Taytay, we could look into another person’s eyes and know—one common team, one common enemy. Then, it was game time.

It was surreal, watching the Lions struggle for the lead against the Stags, especially given their history. All season it has been a bloody battle between these two teams, with the Stags denting the Lions’ record, and the Lions retaliating twice.

And this game, in particular, weighed heavily. For the Lions, winning Game 2 meant another championship. For the Stags, winning Game 2 meant staying in the competition, for a chance at Game 3. Between plays, the Bedan crowd waited with bated breath, excitement and nervousness in the air, exhaling only with a scream for every shot, steal and block.

When the Stags started building and keeping a lead during the second quarter, worry rippled through the crowd, fearing that a do-or-die Game 3 might be in order. The halftime buzzer went, and I felt the trepidation that comes with knowing your opponent has the advantage.

But coming back from halftime, the Red Lions rallied to get even. People leapt to their feet. The chants became louder, and red clouded my vision. It was the Red Army at work, and as 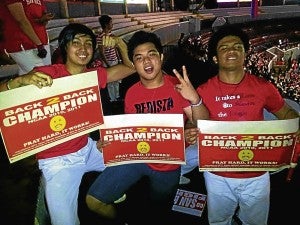 the momentum built, the crowd found its footing and never let up. By the fourth quarter, I was hard-pressed to find any Bedan sitting down.

Toward the last few minutes of the game, the crowd roared, knowing we were only moments away from another championship, from another moment in history. And when the final buzzer sounded, I looked around and caught the eye of a fellow Bedan. We had never seen each other until that game, but we nodded at each other for a job well done. We had done it. We were champions. We now tied with Letran for most championships in the history of the NCAA.

Hours later, I would find my batchmates posting pictures from the game, and I took comfort in the fact that even though we weren’t all close, we had this one thing to bring us together. And more than the victory, pride or honor, this is what I love the most about the Red Lions—the fact that through basketball, one team can rally people together, year in and year out. 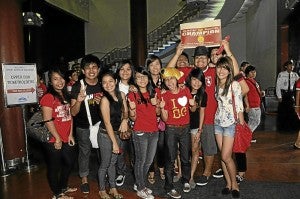 The true bond of a community is revealed through seemingly small details. The red or white shirt that marks you as a Bedan; posters, balloons and tarps raised as a salute. Voices in joy, in frustration, in unison. The entire coliseum roaring with chants of “Defense!” like our lives depended on it. Hugs and smiles after the sweet victory. Fists raised while singing the hymn. These ties bind us, long after the game has passed, and will create an immortal memory.

This is the family I come home to, and this is why, for them, I will always be ready to roar.