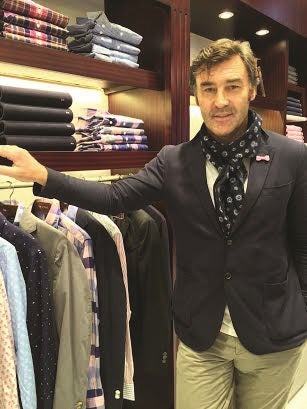 A pink bowtie may be the last thing you’d associate with the savage, sometimes bloody and bone-breaking sport of rugby. But in the same mischievous manner that he and his teammates incorporated oddities in their game back in the day, Franck Mesnel has made the cutesy little accessory synonymous with rugby-inspired casual wear.

The Frenchman was an amateur rugby player in the 1980s, and he and his team had a silly habit of pulling little capers during matches, like wearing pink bowties or pink shorts with regulation uniforms, painting their faces or wearing wigs, and even playing in gold shoes.

They played well, and had fun doing so.

When Mesnel, an architect, went into the clothing business in 1988, he focused on rugby-inspired casual wear. He named it Eden Park, after the rugby stadium in Auckland, New Zealand, where he played in 1987 (the French lost to the Kiwis), and adopted the pink bowtie as logo.

The logo is a “twist,” says Mesnel, “a way to tell you that we’re French. It also represents an extreme part of me. I like to surprise. I’m crazy, I’m fast.”

The logo also represents the soft side of athletes, he notes. What they are on the field is just a part of their persona.

“We’re gentlemen, too,” he adds, sporting his signature look: a loose scarf around his neck, tied in the 1930s Paris-style, “elegant but not too much.”

People associate the logo with something feminine or childlike, Mesnel says, “but as soon as you tell them the story, they like it. It’s about rigor and fantasy. We’re warriors on a field, there’s a certain violence, but there’s also a touch of fantasy. It’s paradoxical. That’s why we have classic little things with a twist, small secrets in a garment.”

A blazer, for instance, might have a little logo patch just under the collar, or nifty pockets concealed in the contrasting color lining—small details that Mesnel is quite proud of. Some logo prints are less discreet than others.

Eden Park is popular for its button-downs as well as Peruvian-made piqué polo shirts in a host of colors and designs. The vintage line has embroidered details and team patches and emblems.

The brand is largely men’s wear, with just about 20 percent for women (only a handful is initially available in the Philippines). But Mesnel says he’s starting to grow the women’s segment, since women make up 40 percent of its Asian market.

Mesnel says he has had no trouble introducing the brand in markets with little affinity to rugby.

He points out that his strong suit is design, so he admits to micromanaging the look of his merchandise. The night before the Central Square shop opened, he was on the floor rearranging things to his taste.

“We have something unique,” he says. “I like to think we’re the Hermès of the rugby world. I’m in casual wear, but I really think in terms of luxury. People come back for the quality.”

It’s tempting to want to grow quickly on the global stage, he adds, “but that isn’t the strategy for me. It’s about being exceptional, that I’m able to say no to something because it’s not perfect. They say you can make money by cutting down the quality and having 50 stores, but that’s not my dream.”