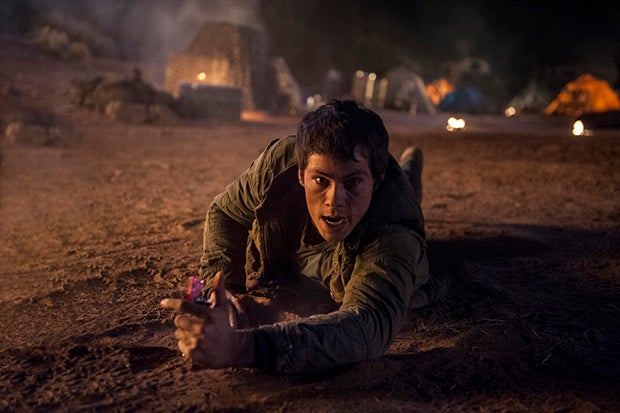 DYLAN O'Brien as Thomas in Maze Runner: The Scorch Trials

A scorching sequel: ‘The Maze Runner’s’ follow-up is bigger and scarier

Turning beloved young adult trilogies into films is no easy task. You have to create a middle ground that respects the canon, while at the same time allowing those who haven’t read the books to discover and love the franchise.

James Dashner’s “The Maze Runner” trilogy combines different post-apocalyptic themes that can be challenging to condense and streamline for film. And, yet, the people behind “The Maze Runner” and now “The Scorch Trials” are proving themselves worthy of the gauntlet thrown down at them.

“The Scorch Trials” begins immediately where “The Maze Runner” left off, with the Gladers led by Thomas (Dylan O’Brien, “The Internship”) at the mercy of a mysterious organization that is purportedly anti-Wicked (or WCKD as the film calls it).

If “The Maze Runner” had a “Lord of the Flies” meets “Alien vs. Predator” feel to it, “The Scorch Trials” has a bleak vibe reminiscent of “I Am Legend,” and “Resident Evil,” with a bit of “The Walking Dead” thrown in.

We begin to see the true effects of the solar flares that demolished the Earth together with the deadly virus called “The Flare.”  As our intrepid band of Gladers makes its way through a desert plagued by lightning storms and a destroyed city to find answers and help, they discover a truth voiced out mournfully by Frypan (Dexter Darden, “Geography Club”): “I never thought I’d say it, but I miss The Glade.”

New characters are added to the mix, like mercenaries Jorge and Brenda who are looking to join The Right Arm, a group of anti-Wicked rebels who want to take down the organization for good.

The movie runs quite long, around two hours and 15 minutes, but you’ll find yourself engrossed in the mysteries that are slowly revealed. There are a lot of action scenes and more edge-of-your-seat, hold-back-a-scream fare, mostly involving Cranks (people infected by The Flare).

While the movie answers a few questions that left us hanging in “The Maze Runner,” new puzzlers are also introduced, so much so that we found ourselves trying to Wikipedia the third book as the credits rolled.

Even before the movie ends, you’ll find yourself looking for the third installment, which unfortunately won’t come out until 2017.

Fans of the books will find this follow-up satisfying (especially Minho fans like us), but as a standalone film, “The Scorch Trials” is a great starting point to get hooked on the trilogy.