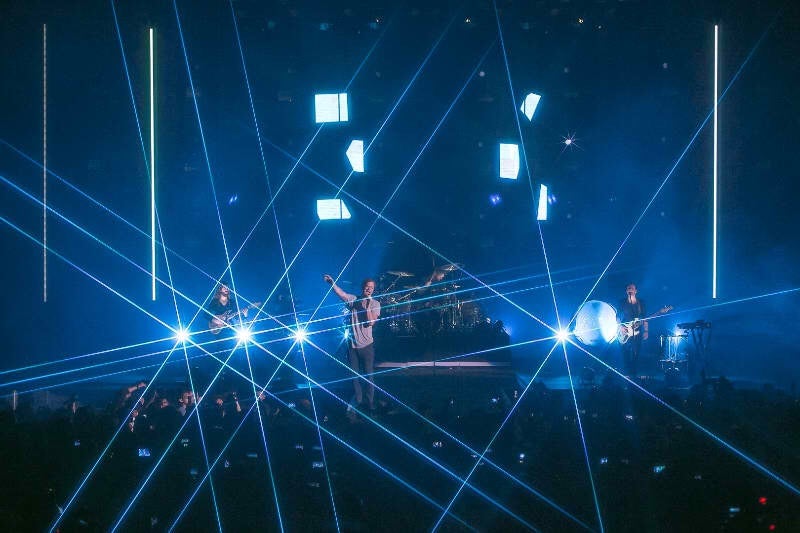 A radioactive experience with Imagine Dragons

It’s been a couple of weeks, yet we can still feel it in our bones.

Such was the raw energy that American alt-rock band Imagine Dragons brought onstage at the SM Mall of Asia Arena last Aug. 27. The Manila show was part of the Asian leg of its “Smoke + Mirrors” world tour.

Aided by brilliant lighting design and looping LED visuals, the band kicked off its much-awaited maiden concert in Manila with its latest single “Shots,” which had the crowd dancing to synth-laden, midtempo beats reminiscent of 1980s Europop.

Fans of the band’s award-winning 2012 debut “Night Visions” might have been overwhelmed by the predominantly darker and more aggressive sound of “Smoke + Mirrors,” especially when heard live. Dan Reynolds’ high-pitched growls and Wayne Sermon’s scorching riffs took center stage in the guitar-heavy tracks “I’m So Sorry,” “Gold” and “Friction,” while the slow, sultry grooves of “Hopeless Opus” and the title track carried notes of angst and mistrust.

Nevertheless, the band made sure to alternate the heavier tracks with foot-stomping ditties like “I Bet My Life,” “Polaroid,” and the relentlessly perky “On Top of the World”—happy, sing-along songs that had plenty of whistles, claps and “whoa-ohs” that kept the mood light.

For his part, Reynolds treated the giggling crowd with anecdotes about the Philippines and his amusing yet admirable attempts at speaking Tagalog, taking several tries before he could say “Mahal ko kayo!” properly.

Why his older brothers, whom he said had previously lived in the Philippines for some time, had thought to teach him the expression “Bobo ka ba?” was beyond us, but it made for some lighthearted onstage banter between him and bassist Ben McKee.

The frontman also seemed to have developed a strange fondness for balut, which the other members shared (read our interview with them on inq.ph/inquirersuper).

The stripped-down renditions of older tracks were just as goosebumps-inducing as the full-band versions. For the debut single “It’s Time,” the frontman urged the crowd to sing the chorus along with him a cappella, before launching into the familiar stomp-and-clap intro. The band also indulged the crowd with acoustic snippets of “Night Visions” favorites “Amsterdam” and “Tiptoe,” which segued into the emotive radio hit “Demons.”

Our personal favorite? The spine-chilling cover of the Alphaville classic “Forever Young,” in which Reynolds’ plaintive wail soared over somber synth chords.

When the big bass drums were carried to the front of the stage, we knew it was time for the explosive finale. For longtime fans, there really was no better way to end the night than with the song that started it all.

Listening to “Radioactive” ad nauseam on one’s media player is one thing; experiencing it live is another. What an indescribable rush it was to be able to hear Reynolds belt out the climactic chorus, let alone sing along with almost equal intensity. It was nothing short of cathartic.

The extended drum solo before the bridge, where all band members pounded away on their own drums in perfect sync, was flat-out electrifying. For fans who know their bittersweet backstory, a live “Radioactive” performance is not just about a band playing its requisite hit—but rather about a guy beating the crap out of his inner demons and turning it into what would eventually become the best-selling song in American rock history.

For the encore, Imagine Dragons wrapped up its 90-minute show with the sweeping, poignant track “The Fall,” where Reynolds held up the Philippine flag as Daniel Platzman’s throbbing drumbeats soared and dipped to a dramatic end.

Despite the post-gig euphoria, we noticed a couple of minor issues. Certain backing tracks, like the electronica harmonies and whistling intros, seem to have been prerecorded—an unfortunate but inevitable necessity when you have many instrumental layers in a song.

There’s also that persistent pet peeve in concerts of late, where most of the time, a lot of people would be standing still and recording when they should be reveling in the music. We can only imagine how this apparent lack of audience participation might not leave the best lasting impression on musicians giving their all in every performance.

Tiny snags notwithstanding, it was, all in all, an amazing show that gave both the band and its audience the chance for some much-needed emotional release. And, boy, did it sound as good as it felt.