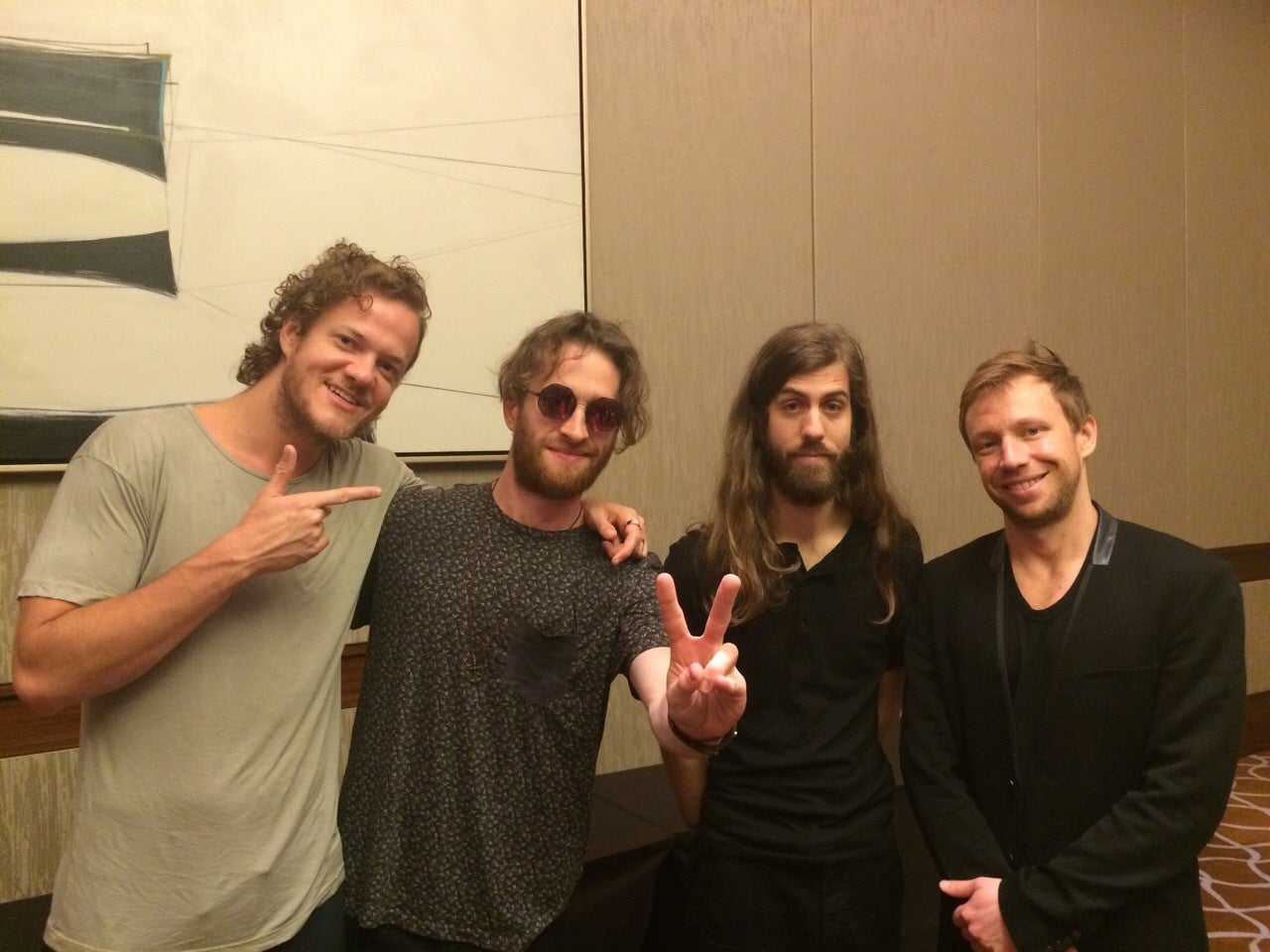 If there’s one thing the members of Imagine Dragons seem to have in common with most other foreign acts who have visited our shores, it’s their almost instantaneous fascination with any or all of the following: balut, jeepneys, and Manila traffic.

“Cultural experience and getting to see the world, that’s what it’s all about,” drummer Daniel Platzman said with a smile during a sit-down with Super and select members of the media, just hours before the band’s first concert in Manila.

Sure, trying the duck egg delicacy has become a common experience for the more adventurous musicians, but what’s surprising is that they actually loved it—”as long as you don’t look it right in the eye,” quipped guitarist Wayne Sermon, amid laughter.

The alt-rock quartet from Las Vegas had been in town as part of its tour to promote their sophomore album, 2014’s “Smoke + Mirrors.” All of the members—Wayne, Daniel, frontman Dan Reynolds, and bassist Ben McKee—are known for constantly writing on the road, and a lot of material that formed the basis of the band’s sophomore album was conceived from experiences gained while touring nonstop. In fact, they had already been writing demos in their hotel rooms after spending a night in the country.

Lest we get too excited at the thought of Manila being immortalized in an Imagine Dragons song, they were quick to clarify that their inspiration stems from something not so literal. “Usually when we go to places, it’s more like a feeling—something more abstract than writing about traffic. Like, how a city or a country makes you feel,” explained Wayne.

Ever since their dystopian dubstep anthem “Radioactive” exploded onto music charts worldwide in 2012, the quartet had been hailed as one of the biggest breakthrough rock acts from this decade.

“We were pretty blown away, to be honest,” Wayne said of the massive success that “Radioactive” had gained. “We knew it was different-sounding, interesting to us. But there’s no way to expect what’s to come.” Asked about the story behind what is now regarded as the best-selling rock song in the history of American music, Daniel explained that it’s not so much about a post-apocalyptic wasteland as it is about self-empowerment.

Frontman and lyricist Dan Reynolds has since gone public about his battle with depression, and the band members have their own personal demons to deal with; hence, the dark, defiant themes that dominate the band’s musical repertoire. Still, this musical contradiction—the interplay between infectiously buoyant melodies and angst-ridden lyrics—may largely be the reason Imagine Dragons’ songs strike a chord with a lot of people across the globe.

“We just go stick with our instincts and make the right musical decisions for each individual song. And try not to be too cerebral about it,” Daniel said. “It’s not really a formula; we don’t go into it, or try to purposely do that. It just felt right.”

On dealing with fame and success:

Daniel (D): I don’t think we have wrapped our heads around it, but I think it’s probably good that we haven’t. I kind of purposely keep the blinders on; if I was to actually take a look at our schedule and all the things we’re gonna do and have done, I’d probably be very overwhelmed.

Wayne (W): We’ve opened up for a shopping mall, people thought we were too loud, people didn’t like us. We had a lot of experiences like that that makes you appreciate this. If we’d gone right to this, then maybe we would feel more entitled to certain things or developed an attitude. We’ve been [together] for seven years, and for three to four years of that, we were not famous.

On getting to tour and meet fans around the world:

D: To travel to a place you’ve never been before and play for a packed crowd of people singing the words at you—I mean, it’s pretty indescribable. It  makes us feel like we need to work harder, to be deserving of the success that’s right in front of us. It’s really staggering, especially when English isn’t really the first language. Like in Tokyo, for example, in Summer Sonic (annual music festival), 10,000 people were singing the words, and I was blown away.

On their music being featured in commercials and soundtracks:

D: Those things have been a really awesome tool, a way to get your music out there that previously didn’t exist. For example, when we did “Radioactive” for “Assassin’s Creed,” we’d just started touring Europe for the very first time, and we weren’t sure if people  knew who we were. And the shows were selling out!

Back then, we could still go to the merch table and talk to everybody. I’d always ask, “How did you hear about our show in Hamburg? You’re not even German!” and they’d say, “We saw this commercial for ‘Assassin’s Creed’ and heard about your show, so we hopped on a plane.”

On songs they personally relate to and the meaning behind them:

D: In  “Shots,” the idea is that the thing you care most about is the thing you end up screwing up. And you’re kind of like your own worst enemy. I can definitely relate to that, the feeling of being frustrated at myself or sabotaging something I really cared about. Maybe I didn’t care about it as much in that moment but looking back, I’m like, wow, I was an idiot.

W: Road life has high highs and really low lows. Like, the most fun we’ve ever had is being on the road, doing what we’re doing, and it’s like being “on top of the world,” right? But it’s also the low lows that we don’t get to talk about.

Things kind of change when you have success. When things change in your life, a lot of the songs are based on not being sure whom you can trust, especially in songs like “Gold” and “Smoke and Mirrors.” We’re like, okay, things are changing; we feel the same, but people around us are acting different.

On their newly released single “Roots”:

W: Another example of us writing on the road. We never stop writing, creating, so when we have a piece of music that we feel we’re ready to share with people, we release it. That’s what we did with this song. It’s a way of saying thank you to the fans who have been with us—new fans and also the fans from a long time ago when we were really nobody.

D: We got Louis Lander Deacon (British photographer) to do the artwork for “Continued Silence” and he did the artwork for this one, too, so it does feel kind of like returning to something familiar.

On revealing the band’s real name (the current one is supposedly an anagram of the original):

D: Probably after we’re doing our residency at a casino in Vegas when nobody cares about us anymore. We’ll go, “Wait! Don’t you wanna know what our real name is?”

W: In our music and in other areas, there are clues to find out what our name is. No one’s found that out yet, but there are clues. That’s all I’ll say.

On music as therapy:

W: I still write about things that are good—”On Top of the World” is the happiest song I’ve ever heard in my life—and there are still songs like that to do. But for us, it’s been more therapeutic to write when you’re not feeling so great; it actually makes you feel better to express that, especially for Dan.

D: There’s really something nice about taking something so negative and turning it into something positive. Honestly, the best thing about getting to go up onstage in front of a crowd is that it’s a great emotional release. When you can channel all that negativity onstage and turn it into energy, it’s really powerful.

On the band’s dynamics:

W: I think for us, it’s been really good. This band got together based on love of music, not so much on friendship. Don’t get me wrong, I actually went to school with Platzman and Ben and we became good friends. It’s a weird thing; it’s a professional relationship, but we’re also really good friends and it’s based on respect rather than knowing each other since we were 10.

D: In all seriousness, none of us got into music for any reason except music. Music is what we do and what we focus on. We’re all like just immersing ourselves in our art, which is the best job in the world, so that’s what helps us get through anything.