Stephen Curry: You have to outwork your competition in whatever level you are | Lifestyle.INQ ❮ ❯ 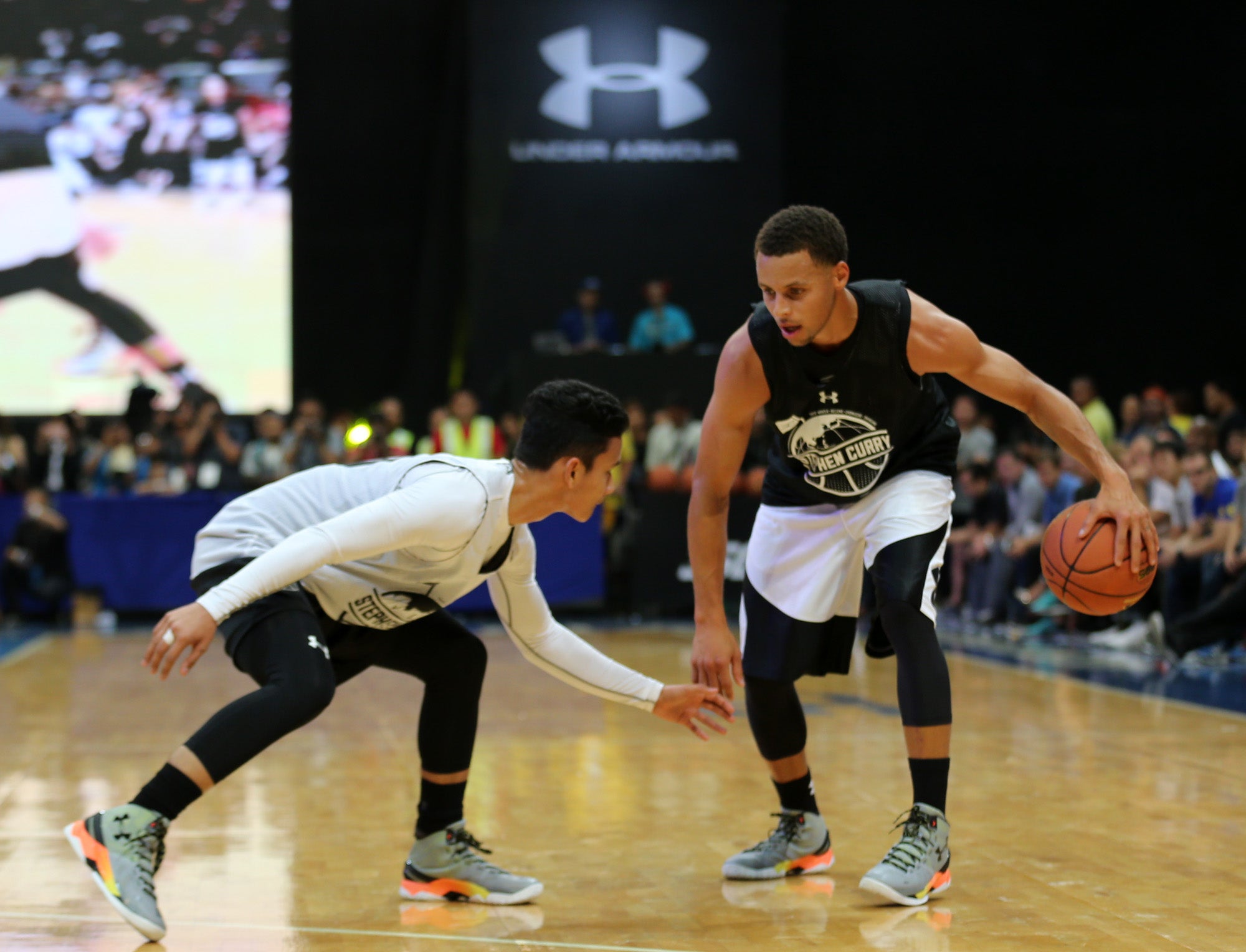 ASKED how Under Armour improved his game, Curry said: “They allowed me not to focus on my shoes or my gear, all I have to worry about is putting the ball in the basket and win games.” PHOTOS BY RAFFY LERMA

Stephen Curry: You have to outwork your competition in whatever level you are

Lupe Fiasco’s “Superstar” captured the vibe as the song blasted in a roomful of fans and media people. Stephen Curry, the phenomenal basketball superstar, is in the house.

It was hard not to be starstruck as the cherub-faced Curry—this year’s NBA Most Valuable Player (MVP)— walked in, wearing a “Thrilla in Manila” T-shirt.

But his journey to fame was not easy, despite having a veteran NBA player of a father. Standing 6’3” and weighing 84 kg, Curry’s built is similar to that of LeBron James and James Harden, though he was always the smallest kid on the team.

In fact, Curry was not recruited by any of the big universities in the National Collegiate Athletic Association (NCAA).

“You’d think there are no hurdles or obstacles that I had to overcome, but even when I got to high school, I wasn’t ranked,” he said during his MVP acceptance speech in Oakland. “I had nobody knocking on my door saying, ‘Please, please, please come play for our school’ until coach [Bob] McKillop called.”

Yet Curry went on to become the star of Davidson College and brought the liberal arts school of North Carolina to the Elite Eight.

In 2009, after three seasons with Davidson with an average of 25.3 points and 4.5 rebounds, he became the 7th overall pick of the Golden State Warriors.

In the latest season of the NBA, Curry averaged 23.8 points per game, 7.7 assists and 4.3 rebounds. He also posted the most three-pointers at 273.

Curry has some things in common with his Filipino fans: underdogs, heart, and Manny Pacquiao. It’s an instant connection brought about by the same love of basketball; as Curry puts it, “basketball is one language.”

During his one-day visit to the country, Curry told a jam-packed crowd at the Mall of Asia (MOA) Arena: “You can’t measure heart. You’re determined. You work hard, you focus on your goal, you put your talent every single day… You can’t measure this (heart).”

The 27-year-old Curry was in town for his first Asian tour sponsored by sports brand Under Armour. He engaged in basketball drills, shoot-outs and scrimmage with several high school basketball players from here and abroad as part of the tour dubbed “UA Roadshow featuring Stephen Curry.”

The Philippines was the second of five stops in the tour.

And, like his NBA games, Curry put on a show—or a splash, rather. He danced the “nae nae” and told the crowd that his daughter Riley taught him the dance moves.

He played one-on-one with a 7-year-old boy who remarkably dribbled two regular-sized basketballs. And, of course, he did what he does best—a shoot-out from the arc.

At MOA Arena, the crowd went wild when Curry first buried a three from the corner left during the first four minutes of the 15-minute scrimmage.

It seemed like Curry was playing for the championship title all over again.

Curry also gave a tip for the Gilas Pilipinas team that was then bidding for a podium finish at the Jones Cup in Taiwan: “Show some heart.” (Not that it lacks one; the homegrown team has carried the motto “Puso” since the 2013 Fiba Asia Championships where it earned a ticket to the 2014 Fiba Basketball World Cup.)

And the same advice goes for all his fans seeking greatness in the sport.

“You have to be a hard worker,” he said. “You have to outwork your competition in whatever level you are. You spend two to three hours in the gym every single day. Even if you don’t want to go to the gym and you feel tired (and) you want to sit at home and watch TV, go to the gym and work on your game. Try to get a little bit better.”

Thrilled by the warm reception given by his Filipino fans, Curry promised to return to the country, the next time with 3-year-old Riley: “This is definitely one of my favorite stops. It won’t be my last time. I’m coming back for sure.”

On Oct. 28, Curry and the Golden State Warriors’ bid to defend their title starts as they open the NBA regular season versus the New Orleans Pelicans in Oakland.

“It’s tough,” he said. “It’s gonna be a fun battle all year long. A lot of teams are mixing and matching and retooling to give better hope and try to knock us out. We gotta get ready. It’s not gonna be easy…”

He added: “We won’t lose confidence but we can’t just sit; we have to go out there… and be ready when the season starts and have the fuel and the fire… as we go and defend our title, which, you’ve seen in the history in the league, is really hard to do.”

Curry said he wants to improve his ball control, aiming to trim his record of 3.1 turnovers last year. He and his mother Sonya have a bet on the number of turnovers he’s allowed during a game.

“She lets me get two turnovers a game,” he noted. “If I go over two, I have to pay her a little money. That’s the one I’m gonna work on the most, save a little of my money from my mom.”

Expect Curry to make an even bigger splash this coming season, since he wants to add another MVP title and, yes, the championship.

“I want to do all those things again,” he said. “I want to be a Hall of Famer and be somebody that people remember for a long time.”