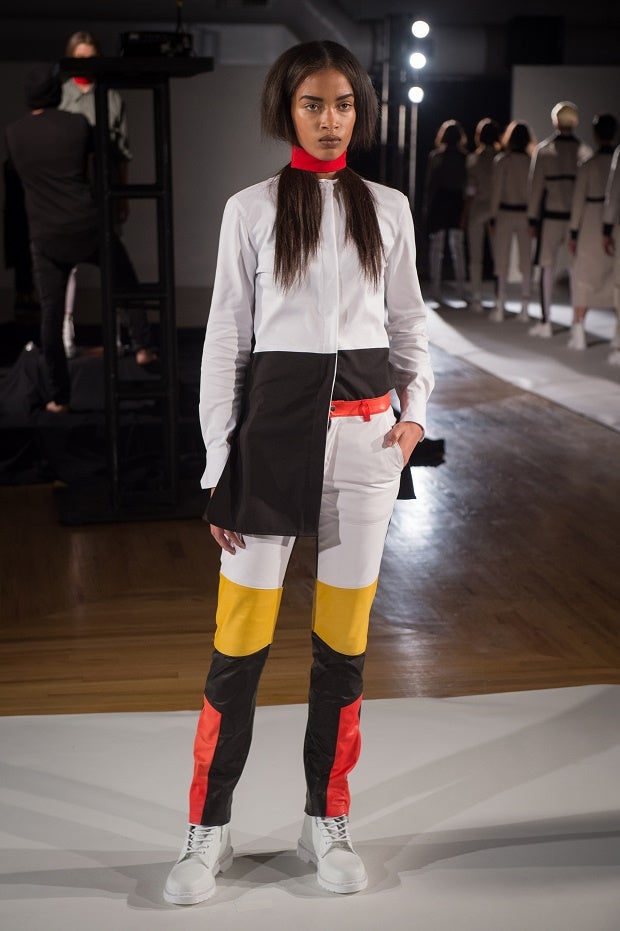 NEW YORK — “Black Lives Matter,” the political movement sparked by the deaths of African-Americans at the hands of white police, has landed on the Fashion Week runway.

Designer Kerby Jean-Raymond’s collection for the Pyer Moss label launched Thursday night with gripping and now familiar videos of police violence. The choking death of Eric Garner. The teenage girl thrown to the ground outside a Texas pool party. The running down of a suspect as lights flashed. The smashing of a car window, and then cries.

Until the day before the show, Jean-Raymond said, he wasn’t so sure he would even include the clothes.

“I was making a collection. I didn’t know I was actually gonna show it,” he said. “I was gonna kind of like hold up a mirror to the room with a video.”

He even invited some family members of victims of police brutality to sit in his show’s front row, a coveted position.

Some fashion and front-row regulars were upset and said they wouldn’t attend, Jean-Raymond said. The 28-year-old designer called it disheartening.

“I’m black, I’m a designer, I’m living in a time when this is happening,” he said. He added, “You’re 28 years old, you’re watching kids younger than you who are being killed by grown men who claim fear as an excuse.”

He said his show was about defying stereotypes — “the thug, the entertainer” — and redefining the black narrative in America.

During the show’s opening video, which combined the images of confrontation with a range of interviews with singer Usher and others on the need for change, people in the audience gasped or murmured. In an added touch, artist Gregory Siff moved among the models on the runway, quickly tagging the mostly stark, sport-ish clothes.

On the back of one robe, Siff scrawled “Breathe Breathe Breathe,” a likely reference to Garner’s repeated plea, “I can’t breathe.”

Even some models didn’t know what they had signed up for until they heard the video begin backstage.

“I was so blown away by it, it was unreal,” said British model Abby Clee. “I knew I was definitely moved. I was a bit teary but thought, ‘No, I shouldn’t cry when I’m about to go out.’ I think a lot of people were quite moved, by their faces. Obviously, it means quite a lot to them.”

Klee said she was honored to be in the show.

“I thought the message that they’re sending was absolutely amazing,” she said.

The designer’s father, Jean-Claude Jean-Raymond, got a hug from his son as soon as the show finished. He said the show’s theme had been a surprise even for him.

“It was really, really nice,” he said.