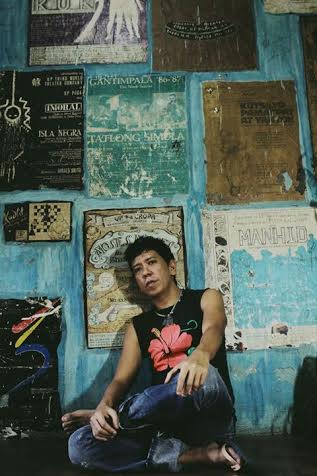 Kanakan Balintagos at home in Sampaloc, against posters of his past theater productions. PHOTO BY JOSEPH PASCUAL/ FROM KANAKAN BALINTAGOS’ FACEBOOK PAGE

Filmmaker Kanakan Balintagos returns to the stage with his ‘prodigal play’

Balintagos sees the win as “magical,” a good omen of sorts, as he is currently directing the rehearsals for the play’s debut staging for Tanghalang Pilipino in October.

He had once assumed that his copy of the play had been lost. While studying at the Philippine Science High School, he would direct short scenes in class, which eventually inspired him to take up Theater at the University of the Philippines. There, he founded the experimental theater group UP Tropa, directed several productions, wrote a play, “Esprit de Corps” (which he turned years later into an award-winning film), and wrote the book and was colyricist of the musical “Manhid.”

“I even acted for Anton Juan in ‘The Bacchae’ with Ishmael Bernal,” he recalls.

But “Mga Buhay na Apoy,” the second play he had written, did not see the light of day for many years.

Balintagos grew up in Sampaloc, Manila, where his mother would put him to sleep with tales of “interwoven myths” from her Palawan childhood. These stories stayed with him and emerged as two plays.

He wrote the first one, “Ang Maikling Buhay ng Apoy,” in 1993 and staged it as his college playwriting-directing thesis. “Mga Buhay na Apoy” was the second one, written a year later. But Balintagos didn’t stage it because “it was so personal, my most personal work; I hid it.”

After college, Balintagos visited his mother’s tribal lands. “I experienced the rituals and the indigenous culture of the Palaw’an people, my mother’s roots. I was enthralled by their aesthetics and realized I couldn’t capture this in theater. It transformed my mind into a more cinematic vision,” he says.

His first short film, “Ang Maikling Buhay ng Apoy, Act 2, Scene 2: Suring at ang Kuk-ok” (available for viewing on Vimeo.com), was based on his play.

His first full-length movie, “Ang Pagdadalaga ni Maximo Oliveros,” was the breakout hit of the first Cinemalaya Film Festival, reaping a slew of awards here and abroad. A stage musical adaptation, “Maxie The Musicale,” was mounted by Bit by Bit Company in 2013.

Last year, his musical “Manhid” was restaged by Ballet Philippines, and he made the film version of “Esprit de Corps.”

It was while digging through his files for the script of “Esprit” that he found his long-lost copy of “Mga Buhay na Apoy.”

“It reappeared 20 years later; it’s my prodigal play,” he says.

And now the prodigal son has come back to theater. “Ironically, the main character in this play decides to return to Palawan, and now this play has made me decide to return to my first love, theater,” he says.

He’s also fired up by his Palanca win. “I was so inspired by the energy of the writers at the awarding ceremony!” he adds.

Before these, the play had received a staged reading at last year’s Virgin Labfest. “It made the audience cry. It made the actors cry during rehearsals. For the actual performance, I told them not to cry until the fourth act, but when the third act came, they couldn’t help but cry again,” he says.

“Medyo masakit kasi,” he notes. “The family in the play reveals sacrifices they’ve made just to be able to live in Manila.”

“Maybe the reason the play resurfaced after two decades is that it’s now time to tell the story,” he says. “I’m more mature now as an artist… I have the distance needed to direct my own family’s story.”

Far from being bogged down by the memories evoked, Balintagos says, “Nag-e-enjoy ako sa teatro ngayon nang sobra. Kakaiba. The feeling of directing theater again is deep and profound. The feeling is very spiritual, food for the soul.”

Now that he’s made the switch back to theater, this time, it’s cinema that’s trying to pull him back. “My actors tell me that I should make it into a film,” he says, laughing.

“But it was written for theater,” he explains. “I want to test its full potential first onstage. I have a feeling I will be in theater for quite some time again. Manunga banar (for beautiful truths)!”