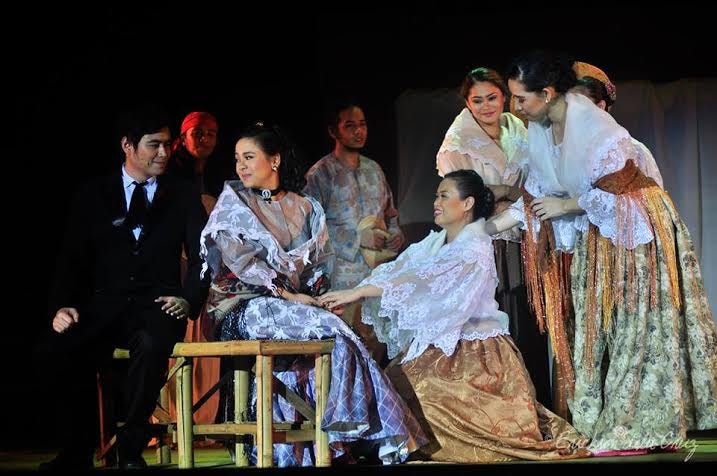 Jacob Benedicto as Crisostomo Ibarra and Myramae Meneses as Maria Clara in Gantimpala Theater’s “[email protected], The Musicale,” a musical adaptation of Gantimpala’s long-running play “Kanser,” based on Rizal’s “Noli Me Tángere.” The show, directed by Franniel Zamora with music by Joed Balsamo, has remaining performances today and tomorrow at SM Southmall. PHOTO BY ERICKSON DELA CRUZ

“[email protected], The Musicale” premiered at the Armed Forces of Philippines Theater in Camp Aguinaldo, Quezon City,  last Aug. 28 and also had shows at the Star Theater, Star City in Pasay. It has remaining performances today, 11 a.m. and 2 p.m., at Cinema 3 of SM Southmall.

“Kanser” makes overt parts of Rizal’s narrative that previous interpretations had only hinted at, such as the rape of Sisa and the murder of her son by church sacristans, and Padre Salvi’s lecherous desire for Maria Clara.

While the play is interesting enough, it has benefited greatly from becoming a musical, the material now an even more engaging affair with the commendable—and for the most part commendably sung—music by Balsamo.

Meneses’ classical training as a soprano allows her to perform her songs flawlessly. Meanwhile, Benedicto, with his pop music training, sings and tells his story through song clearly and emphatically.  Alejandrino as Sisa is also notable.

The tableaus by Morales that begin each scene, the actors positioned in a frieze, make for arresting visuals.

But for the rest of the musical, some scenes could use more movement and choreography.

The costumes by Figueras are rich, detailed and evocative, creating quite a lavish spectacle that makes the set almost an afterthought. That’s because the set and props seem to lack detail, depth, texture and imagination.

On white curtains are projected the excellent and unique sand art videos by Joseph the Artist. But the visuals are not helped by the poor quality of the projectors, the rumpled look of the curtains and the stage lighting that competes with the projections and renders them pale at times.

The show presented at the press preview still suffered from sound system glitches that marred the performances and distracted the actors and audience members alike. That the cast was able to perform despite such challenges, and that the audience was able to appreciate their storytelling, should earn the performers kudos. Hopefully, the problems have been solved by this time.

On its 38th season, with “[email protected], The Musicale,” Gantimpala is proving not only its capacity for longevity, but also for change and innovation. We look forward to the reinvigoration of its three other classic, curriculum-based productions, “Florante at Laura,” “Ibong Adarna” and “Kanser’s” companion piece, “El Filibusterismo.”