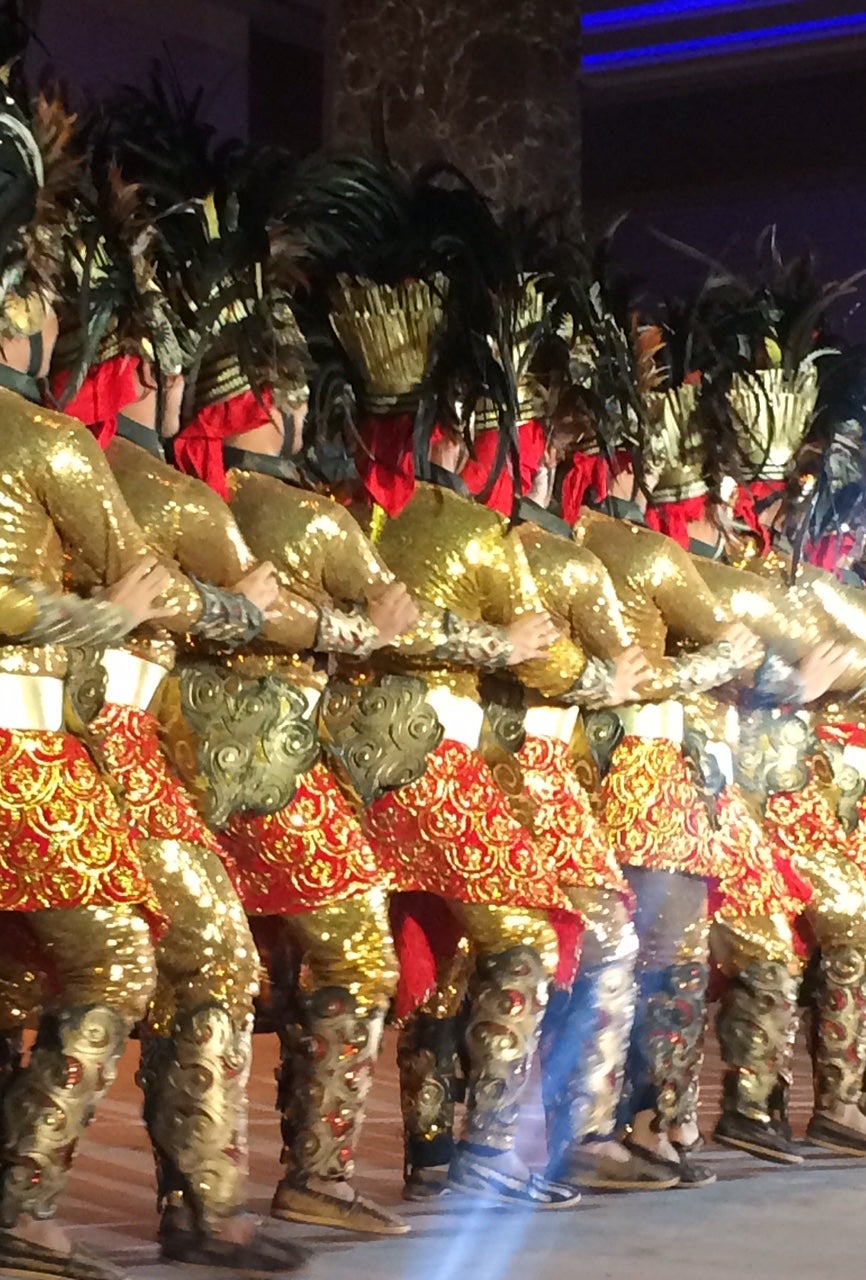 Lumad Basakanon march and cheer in unison to the delight and awe of foreigners.

Sinulog, Pinoy rap, the Beatles–it’s one big fiesta for Apec in Cebu

It wouldn’t come as a surprise if many of this year’s Asia-Pacific Economic Cooperation (Apec) delegates, after participating in daily mind-numbing marathon meetings, would hardly remember anything by 2016—except for the welcome parties they attended.

Delegates from 21 member-countries were treated to one well-received welcome party after another at the Radisson Blu Hotel, staged by events organizers led by creative director Nes Jardin.

By Monday, Chris Millado, artistic director of the Cultural Center of the Philippines, and collaborators led by director Junjet Primor and choreographer Victor Cuenco, welcomed a different set of delegates with a bigger, more unforgettable show.

“Here Comes the Sun,” a 45-minute “Beatles-meets-Pinoy pop” extravanganza with a cast of 400 performers, including members of the Mandaue Children’s Choir and Lumad Basakanon, five-time national champions in Cebu’s Sinulog and Manila’s Aliwan festivals, brought the house down.

“‘Fused’ and ‘Here Comes the Sun’ were the seventh and eight Apec events we’ve organized so far,” said Jardin, who also helped mount Apec 2015’s highly successful Boracay beach party a few months back. “The first one was held late last year at Fairmont Hotel in Makati. We have nine more events to go.”

Guests were so revved up by the gold-clad Sinulog champions’ synchronized performance that many soon found themselves dancing in front of the stage and along the venue’s aisles, as the Reo Brothers, a band from Tacloban, played one Beatles hit after another like “Love Me Do,” “I Feel Fine” and “Hey Jude.”

Even the country’s diplomats and Cebu City’s socialites were unable to resist the beat as they gamely danced with the show’s performers.

Apart from their talent, the Reo Brothers symbolize the Visayan people’s legendary resilience and can-do spirit in the face of such odds as the Bohol earthquake and Supertyphoon “Yolanda” in 2013.

Before moving to Manila, the Reo Brothers were based with their family in Tacloban, one of the cities that bore the brunt of Yolanda’s wrath.

After miraculously surviving the storm, the homeless brothers and their family moved to Manila to rebuild their lives. Rather than sink into despair, they sought refuge in performing.

Soon after their YouTube video became viral, they started guesting on ABS-CBN and even at a Madison Square Garden show in New York.

“I made the Reo Brothers and Beatles music the jump-off points to a show that pays tribute to people’s resilience,” said Millado. “Beatles music is perfect because it has a universal and timeless appeal that everyone can relate to.”

At the same time, Millado wanted to highlight the host province’s economic boom and cultural pride. And what better way to do this than devote portions of the show to Cebu’s champion ballroom dancers, including an army of grade-school children, leading designer Cary Santiago, and the Sinulog festival?

Sinulog, one of the country’s biggest and most highly anticipated annual festivals, is built around the province’s devotion to the Sto. Niño and the hope it brings to countless Cebuanos.

After presenting a series of numbers performed to rearranged Beatles songs, including spot performances by Cebuano singers Maria Donna and Jem Cubil, Millado made Lumad Basakanon’s winning routine his finale.

Guests were awed as the group made its entrance, cheering and marching in unison like a pair of chugging trains.

“Cebu is bursting with so much talent and content that trimming the show down to a manageable level became one of our major challenges,” Millado said.

Since they had to make do with a small stage, a good number of performers spilled over to both sides of the dinner venue, adding to the event’s fiesta-like atmosphere.

Staff at Radisson Blu led by general manager Nishan Silva had to repurpose the hotel’s huge, high-ceilinged lobby to a dinner and show venue for hundreds of guests since all its ballrooms and functions rooms were used earlier during meetings.

Several delegates who were lucky enough to attend both shows had an idea of things to come, as Quintos and company staged “Fused,” a smaller but equally colorful show two nights earlier.

“Fused” featured an abridged and stylized version of Philippine history, both on stage and through vintage images of the country and its people on a giant screen.

Quintos worked with a cast of 50 talents, including dozens of costumed dancers from the Ramon Obusan Folkloric Foundation and terno-clad mannequins from the Professional Models Association of the Philippines.

Instead of resorting to subtitles, as singers OJ Mariano and members of Baihana and Philippine Opera Company belted out Filipino folk classics as “Bituing Marikit,” “Katakataka,” “O Ilaw” and “Bahay Kubo,” Quintos jazzed up the medley’s arrangement and interspersed them with American standards by Cole Porter.

He also tried to combine such disparate disciplines as classical music with rap, ballet with folk dance in one show.

Violinist Jobry Cimafranca, for instance, provided music to a pair of ballerinas from Ballet Philippines before the show shifted its focus to Filipino rap music and dance by members of Kenjohn and the Rockstars.

“After presenting a series of traditional songs and dances, we wanted to elevate the show’s energy level by featuring something more current and unexpected,” said Quintos. “I also like the fact that Kenjohn and the Rockstars sing and dance to their own music.”

Before the show ended, three sets of featured performers were sharing the stage with other dancers and singers. The entry of Obusan dancers in native costumes and models wearing ternos by designer Maxi Cinco added to the finale’s eclectic atmosphere.

In a way, the word “fused” also echoes Apec member-countries’ common goal for a more peaceful, prosperous and unified region through a series of annual dialogues backed by concrete and doable action plans.