‘I design clothes that don’t dumb down the wearer’ | Lifestyle.INQ ❮ ❯

‘I design clothes that don’t dumb down the wearer’

It’s having the skills and the basics, not about one’s race, that should prove crucial in the globally competitive fashion industry, says Lilia Yip, a UK-based Singaporean designer.

“It’s the same with any designer: You need skills, basic training, a design philosophy and an understanding of who your customer is,” said Yip, 33, the British Council’s guest designer at the recent Look of Style Awards 2011.

The Look of Style Awards is an annual search of Look Magazine, Inquirer Lifestyle and Samsung, under the auspices of the British Council, for the upcoming designer to be sent to the famous Central Saint Martins in London, for a workshop and observation tour. The winner, Jeof Gonzales, was chosen last month at Rockwell Tent.

“I don’t think there’s a tick, tick, tick on all the boxes and you will be successful,” she added. “Whether you’re European or African or Asian, you need all the same fundamentals to make it. Also, knowing where your niche is, where your clothes should be, where the women and men who will buy your clothes can be found, and learning how to reach them. If you can work through all those questions, you’re on your way.”

Yip, who presented a 15-piece collection inspired by the movies she loved when she was growing up, moved to the UK eight years ago where she earned a BA from the Edinburgh 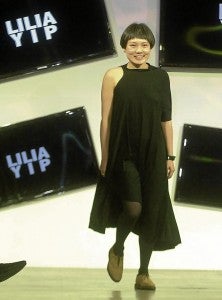 College of Art. She took her Masters in Fashion Womenswear at the Royal College of Art. In 2009, she launched her own eponymous label in London (www.

liliayip.com). She’s based in Brighton.

“This is a continuation of my body of work,” she explained of her collection. “The inspiration is a section of my past. Growing up, I liked the Hong Kong comedies, particularly those of Stephen Chow. I liked the surrealist humor, the very physical language. They were slapstick but also had a moral spine behind them. There’s an intelligence that plays with the body.”

The predominantly black and white collection had graphic prints of hands traveling across the body, doing different things, like reading a book or holding a cup of tea. Yip liked their element of playfulness and humor.

Her look is streetwear “but with an upbeat ante,” she said. “I’d like to think that they could take you through the day. Some are easier to wear, some a bit dressier. Comfort and a kind of flow are big elements.” Yip believes that since the shapes are easy and billowy, the clothes suit a woman’s character rather than an age.

“I design clothes that don’t dumb down the wearer. I believe that everyone can approach clothes with intelligence, with feeling, with humor, with confidence. Women who wear my clothes are quite sure of themselves and they’re looking for something that doesn’t shout but still has something special about it.”

Also a musician and songwriter, Yip wrote the music that played during her segment on the Look show. She fronts a folk-rock band called Morphy. It’s customary for this designer to write a piece of music to go with each collection.

A proponent of ethical practices in design, she only uses fair-trade fabrics and natural materials like organic cotton, bamboo, silks and wool. “I don’t trumpet that, but that’s what I do,” Yip said.