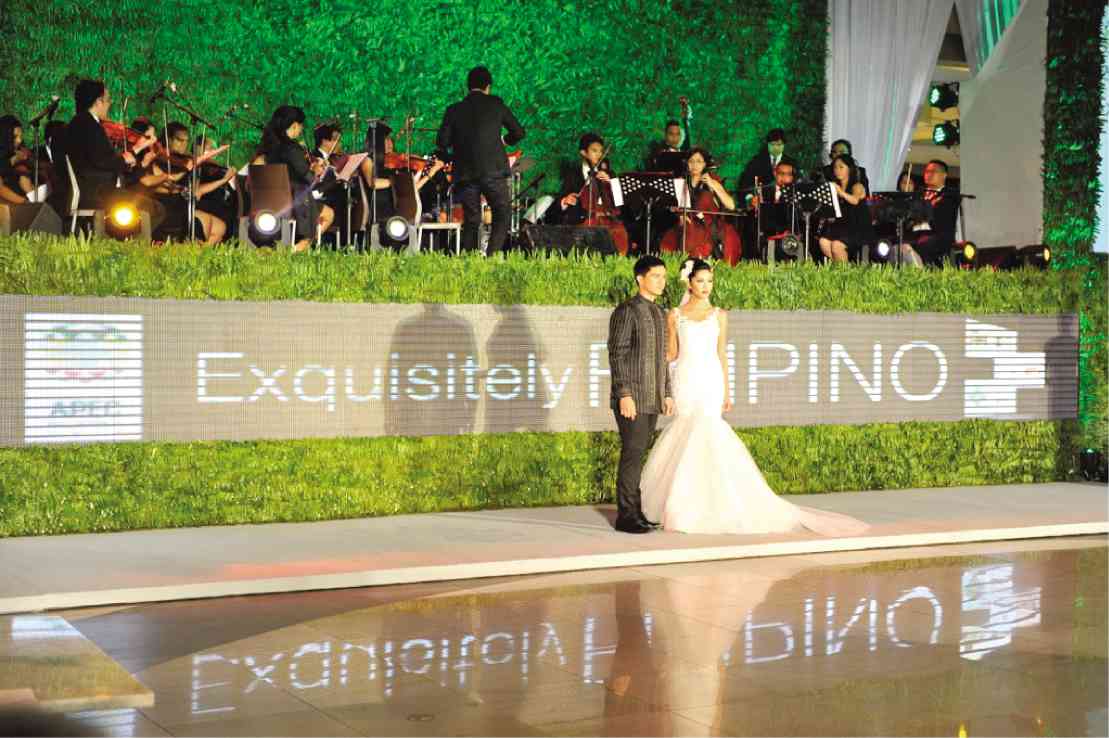 FROM the collection of Philip Rodriguez with the SMCebuOrchestra

Neoprene with applique, calligraphy on a gown slit–Cebuano fashion glams up Apec

Ten of Cebu’s leading fashion designers showed guests, including delegates to the ongoing Asia-Pacific Economic Cooperation (Apec) in Cebu City, what exquisite clothes are all about in “Exquisitely Filipino,” a recently concluded trade exhibit organized by SM City Cebu that featured the best of the island province’s furniture, accent pieces and fashion accessories.

It culminated with a fashion show at the mall’s North Wing featuring the clothes of 10 members of Fashion Council Cebu, including such well-known names in Manila as Philip Rodriguez, Jun Escario, Cary Santiago, Arcy Gayatin and OJ Hofer.

“‘Exquisitely Filipino’ isn’t just an ordinary exhibit, but a special one for us, as it showcases the best of the Philippines through Cebuano fashion, furniture and home accessories,” said Marissa Fernan, vice president of SM Prime Holdings.

For accessories like soft leather clutches and eye-catching minaudiéres, the designers sourced from exhibit participants Doro Barandino and Bon-Ace.

“This is a historic time for Cebu, and SM wants to be part of it by helping promote our designs to the world through Apec delegates,” Fernan said.

Known for his updated takes on classic and romantic evening wear, Rodriguez used black and white neoprene with beaded appliqué to give his long Filipiniana dresses a contemporary edge.

“I drew inspiration from the Maria Clara for one of the looks,” he said. “It’s an updated version, of course, that shows plenty of skin.”

Albert Arriba also went romantic by embellishing his satin gowns, including a copper serpentina, with floral appliques or metal studs in various sizes.

Escario also opted for “classic” dresses, including a ball skirt with lace top, that combined new and old materials and treatments such as neoprene, soft tulle and callado embroidery.

With nude stretch tulle as canvas, he accented one of his dresses with cutouts and paillette-like details that formed the visage of a Hindu goddess. One look consisted of a plain shift dress with an intricate cutout overlay.

Gayatin also opted for neutral-colored neoprene, which she combined with polka-dotted silk fabrics, to produce loose separates that can be chic evening alternatives to the usual gowns.

Except for the palazzo pants, every piece was cut on the bias. She designed the collection with the modern woman in mind.

“It’s something I would wear to a black-tie event without worrying how I could get out of the car,” she said.

Apart from their respective strengths, the featured designers also drew inspiration from their chosen themes.

Yvonne Quisumbing, for instance, chose bayanan, the Cebuano word for shell. This was reflected in the glass beads and ribbons that accented her soft see-through tops. She paired them with leopard-printed shorts and slim pants made of wool and linen.

Mia Arcenas presented part of her holiday collection inspired by sidlak, the Cebuano word for shine.

To emphasize the feminine form, she used soft jersey and stretched tulle embellished with gold sequins and beads. A sequin-beaded robe, seemed like it came out of a ’70s disco scene.

Hofer used silk satin to produce a citrine robe and pants, and ochre column with cowl back. A citrine bamboo column with calligraphy on the slit was made of tulle and accented with paillettes. All three looks, he said, were inspired by Eastern philosophy on “emptiness.”

Philipp Tampus drew inspiration from Anglo-African patterns and artworks to produce three earth-toned looks, including an updated and rustic take on the classic baby doll dress. Each dress was heavily accented with embroidery and lace trimmings.

Ao’s dress had a detachable tartan overskirt while his loose men’s suits made of gray wool were a total departure from the tight-fitting men’s silhouette so in these days.