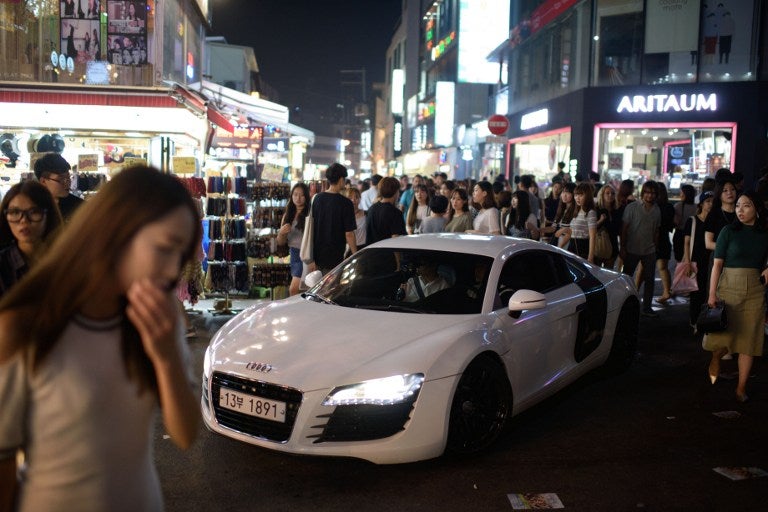 In a photo taken on August 15, 2015 an Audi sports car drives through the popular night spot of Hongdae in Seoul. Seoul is emerging as Asia's new fashion showcase, with the world's top luxury firms seeking to cash in on the regional trend-setting popularity of South Korean pop culture. Fast-growing Asia is a key market driving the global luxury industry, with purchases by Chinese consumers accounting for one third of global sales, according to market researcher Bain & Company. AFP PHOTO / Ed Jones

Move over Hong Kong, Tokyo and Singapore. Seoul is emerging as Asia’s new fashion showcase, with the world’s top luxury firms seeking to cash in on the regional trend-setting popularity of South Korean pop culture.

Fast-growing Asia is a key market driving the global luxury industry, with purchases by Chinese consumers accounting for one third of global sales, according to market researcher Bain & Company.

And those consumers often take their style pointers from elsewhere, which is why many brand companies are increasingly focusing on the country described by Bain as Asia’s “trendsetter and influencer for fashion and luxury.”

Over the past year, leading global fashion houses have upped their game in South Korea in a bid to reach those well-heeled Asians who take their fashion cues from popular Korean TV and pop stars.

French powerhouse Chanel held its 2015/16 Cruise Collection in Seoul in May — its first show in South Korea.

And in June, Christian Dior opened a six-story flagship store — the largest in Asia — in the upscale district of Gangnam, made famous by the eponymous hit by South Korean rapper Psy.

The deal made the French luxury empire the second-largest shareholder of YG, whose roster of K-pop acts includes Psy, G-Dragon and the boyband BigBang.

“Global luxury firms have begun to realize that what’s popular in South Korea soon becomes popular across Asia,” said Lie Sang-Bong, a prominent fashion designer and head of the Council of Fashion Designers of Korea.

Lie said luxury brands that had previously favored Hong Kong or Singapore as the center of their Asia business started to turn to Seoul about three years ago.

China’s influence as a trendsetter will eventually catch-up with its importance as a market, but for now “Seoul is where they look to see the next big trend,” Lie said.

Famed fashion critic Suzy Menkes picked Seoul as next year’s host for what will be only the second edition of the annual Conde Nast International Luxury Conference.

“I think that (luxury brands) are thinking of this country as a hub, this city in particular as a hub, where people will go and buy things,” Menkes, the international fashion editor for Vogue, said during a visit to Seoul in July.

The real attraction for the brand names is the promotional reach into the rest of Asia and beyond provided by the so-called Hallyu (Korean Wave) of Korean TV shows and pop music.

The power of the Hallyu phenomenon was most recently demonstrated by the 2014 hit TV drama “My Love from Another Star” which was enormously popular in China.

A pair of $625 Jimmy Choo shoes worn by the show’s heroine, Jun Ji-Hyun, sold out in shoe stores across Asia, while an Yves Saint Laurent lipstick she was rumored to be wearing experienced a similar run in China.

Rapper G-Dragon — a style icon followed by millions of fans across Asia and beyond on social media — is considered a poster child of the Hallyu boom.

His favorite items, from Yves Saint Laurent jackets to Christian Louboutin sneakers, earn instant recognition among his followers and are discussed on dozens of websites dedicated to the styles of K-pop artists.

Now the 27-year-old has become a front-row fashion show fixture, not just in Asian cities, but also Paris and London.

Korean TV dramas have also proved to be a striking marketing device for the cosmetics industry, according to a May report by market researcher Euromonitor.

Beauty products featured in top-rated shows or favored by their stars fuel “rocketing demand for the relevant color cosmetics and skin care products” in other Asian countries, especially China, the report said.

And it isn’t only foreign brands that are benefiting from exposure in the South Korean shop window.

A “cushion-compact” — a sponge soaked with liquid foundation — developed by AmorePacific has proved a major hit in Asia, prompting Dior to form a strategic partnership with the Korean cosmetics giant to use the “cushion” technology.

“It’s a small country but a perfect starting point to tap into the Chinese market and beyond,” Ahn said, adding she had been bombarded with proposals from European and US firms hoping to invest in Seoul cosmetics makers in recent years.

“They even want to invest in relatively small, little-known cosmetics firms … because they know many Asian women, especially Chinese, are closely watching beauty trends in Seoul,” she said.