For the first time, Licad to play Bartok No. 1 in Washington, Manila | Inquirer Lifestyle ❮ ❯ 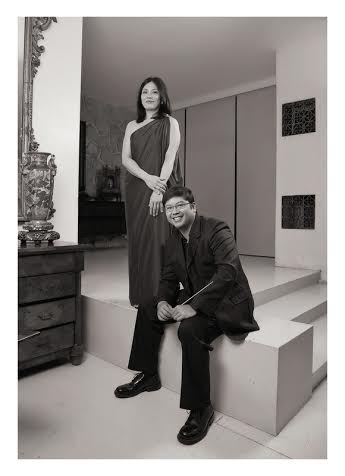 CECILE Licad with Gerard Salonga. First team-up for Bartok No. 1

For the first time, Licad to play Bartok No. 1 in Washington, Manila

THE SELDOM heard Piano Concerto No. 1 by Bela Bartok will be interpreted by Cecile Licad as soloist of the Spokane Symphony in Washington on Sept. 19-20. She will also play the piece in Manila on Oct. 2 with the ABS-CBN Philharmonic under conductor Gerard Salonga.

The concerto was first heard in Frankfurt in 1927 with the composer himself as soloist.

Bartok played it at the Carnegie Hall in 1928 with the Cincinnati Symphony Orchestra, during which it received mixed reactions with the “harshness” and “dissonance” of the piece baffling audiences and critics.

Henrietta Strauss of Nation wrote in 1928: “There were broken bits of themes hammered out on the piano and answered by equally angry blasts of wind instruments. The only sustained motive is that of bitterness, and the sum total is unmitigated ugliness.”

Licad admitted making the concerto work is a lot of hard work as she tries out the piece for the first time this weekend with the Spokane Symphony under the baton of Eckart Preu.

How she can bring these unknown pieces to life is another challenge to her artistry.

Her instinct always tells her classical music doesn’t belong to the museum and should be enjoyed by contemporary audiences.

“I learn the score very well, not just my part but everybody’s,” she said about her preparations. “Being with a chamber orchestra, you don’t just think about your music. When I perform, I stop thinking and analyzing and play what I feel instinctively. I never plan anything —the phrasing is here, a harmonic chord is there. I think of these things at the moment.”

In another interview, she said, “Whenever I play new or old pieces, I always make effort to find something challenging about it. Sometimes, for a performer, things can almost become too easy, and you think you can do everything, but then you always have to be imaginative, too, even regarding the technical aspects. So each time you play, make it sound like it’s a new piece and something you just discovered. In that way, you savor the freshness and it is most likely that the audiences will feel that, too.”

For the record, she was the first Filipina and the first Asian to win the Leventritt Award in 1981, when she was only 20. Among those who earlier won the same competition (considered the Rolls-Royce of competitions) were Van Cliburn, Gary Graffman, Alexis Weissenberg, John Browning, Itzhak Perlman and Pinchas Zukerman.

When Licad won the award, the members of the Leventritt jury included Leonard Bernstein, Leon Fleisher, Rudolf Serkin, Max Rudolf, Eugene Istomin and 25 others, some of whom past Leventritt winners themselves.

Leventritt founders believed it was undignified to subject young talent to the circus atmosphere found in many international competitions. So they just decided to observe talented musicians over a period of time and in a variety of contexts. This allowed them to hear artists who did not necessarily fit into the “competition mold” and might never have entered the menacing atmosphere of the typical contest.

The years after Licad won translated into well-received debuts with distinguished orchestras and conductors (Zubin Mehta with New York Philharmonic, Claudio Abbado with Chicago Symphony, Andre Previn with London Philharmonic, Mark Gorenstein and the Russian State Orchestra), acclaimed recordings and recitals all over the world.

It wasn’t long before a piano icon referred to her as “the greatest pianist of her generation” and a New York Times critic dalled her “one of the world’s best.”

One must remember that as in her teens, the eminent pianist Rudolf Serkin—who happens to be one of her teachers—noted: ’’When Cecile (Licad) auditioned for me there was something very special about her musical personality. She had a deep understanding of music and a conviction in her playing that I did not expect from someone so young. She has an incredible instinct for all kinds of music and seems equally at home in any style. This is a very great gift. Nobody could teach her that—it’s her own.’’

Licad is coming back to Manila on for a fundraising concert with the ABS-CBN Philharmonic under Gerard Salonga.

The concert on Oct. 2, 6 p.m., will be held at the Sanctuario de San Antonio Parish in Forbes Park as part of the Francis Fest 2015.