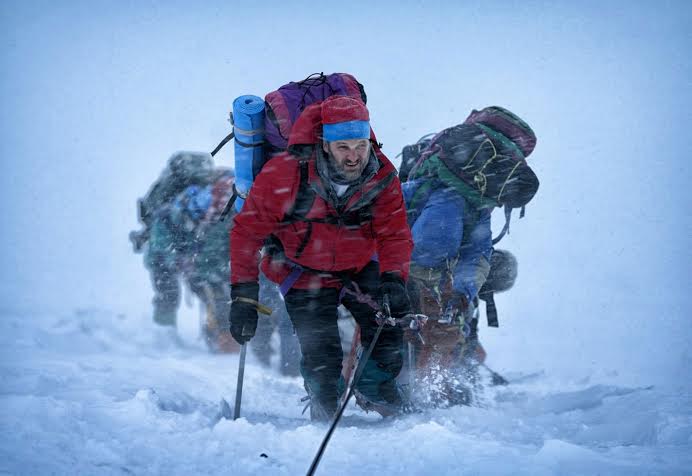 BASED on the books of journalist Jon Krauker and pathologist Beck Weathers, movie is about the storm that hit the world’s highest mountain, killing eight trekkers.

BEFORE the earthquake that struck Nepal last April, the worst Mt. Everest disaster was recorded when a storm hit the Himalayan Mountain on May 10, 1996 that claimed the lives of eight mountain climbers.

Journalist Jon Krauker was on the mountain when the tremendous storm occurred. He signed up for a climb and was doing an assignment about the commercialism of Mt. Everest for a magazine. After the tragedy, he wrote his experience and survival in a book titled “Into Thin Air.”

Aside from Krauker, pathologist Beck Weathers also wrote about how he survived the 1996 storm in his book, “Left for Dead: My Journey Home from Everest.”

These books became the inspiration of Working Title producer Tim Bevan in making the film, “Everest.”

“Many people have written or spoke accounts about what had happened up there,” Bevan said. “That is why the 1996 disaster is one of those stories that has something so gripping about it.”

Screenwriters William Nicholson and Simon Beaufoy carefully studied the stories from the books of Krauker and Weathers. They combined the accounts of the authors and turned it into a material for the big screen.

Aside from these books, the filmmakers also drew inspirations from news articles and other stories from survivors. They also managed to get transcripts of the satellite conversations recorded during that day from Mt. Everest that became useful in making the script.

The film revolves around the two different groups that trekked Mt. Everest on May 10, 1996. The teams are Adventure Consultants and Mountain Madness headed by Rob Hall (Jason Clarke) and Scott Fischer (Jake Gyllenhaal), respectively.

It is the final ascent to the peak of the two teams during that day and the weather at the beginning of the journey promises a safe trek. However, the groups face an unexpected storm that challenges everyone in returning back to base camp.

The film is directed by award-winning filmmakerBaltasar Kormákur.

According to Kormákur, directing this film has appealed to him in a profound level and he believes that this story is “both one of achievement and a cautionary tale.”

“Everest is a metaphor for any kind of ambition,” Kormákur said. “I wanted to make it in the most authentic way possible and to show (people) the mountain in a way that hasn’t been possible until now.”

“At the same time, (I want to) create intimacy between the characters that is all too rare in big studio films,” he added.